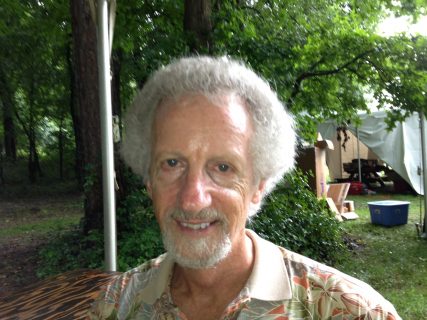 Philip Yancey, staying dry under a canopy at the Wild Goose Festival.

Over the Wild Goose weekend I was able to sit down with Philip Yancey, one of my favorite authors, for an interview about his brand-new book, The Question That Never Goes Away. Released last week, it’s available exclusively from Amazon for the Kindle for $7.99 for the next few months before it enjoys its traditionally published print edition in December.

At the Goose -- where Philip, a lover of nature, marveled at the downpour all around us and the variety of deciduous trees in North Carolina – we spoke about the themes of his new work and the unusual strategy he has used for publishing it. 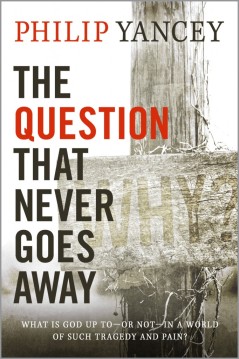 To speed up its availability, Yancey's new book is digital-only for the first few months and then will have a traditional print release in December.

The “question that never goes away” seems to be similar to what you undertook in the classic and beloved book Where Is God When It Hurts?

That is the question that never goes away: where is God when it hurts? It’s just around all the time. I wrote that book in 1976, a long time ago. I’ve had a lot of contact with people since then and have encountered a lot of suffering. And my wife also worked as a hospice chaplain, so there were a lot of tears at the dinner table.

I think that health is the ability to make wholeness out of our lives. Our tendency is to amputate painful things, but I try not to do that. I have seen what happens when people do that.

Here at the Festival you shared the story of how, when you were little, your father contracted polio. Your fundamentalist church said that he would be healed by faith and prayer, so they took him off the Iron Lung. But he died shortly after that.

I was one year old when my father died, and that question [where is God when it hurts?] was one that haunted my childhood, because it was answered in the wrong way.

So many times the church does that; it answered the question in the wrong way. So after something like Newtown a preacher goes on TV and blames it on our nation because of gays, or whatever. It’s so unlike Jesus.

You wrote this book quickly. Was it a response to something?

In December we were called to Newtown, right after Christmas. Two weeks after the shooting. I knew a person who had a very good church there. They were trying to do something for the community. So they called and said, “I know it’s terrible timing, but is there any way you can come here to talk?” So we went and met with parents, first responders, all sorts of people.

And the next week I had a trip to go to Kazakhstan of all places. I had a lot of time on my hands after I was speaking, a lot of time just sitting in my room. And as I thought back on 2012, I realized there were three times when I was asked to speak on “Where is God when it hurts?” But they were for three very different things. One was for the first anniversary of the tsunami in Japan. Here’s this terrible natural disaster where 20,000 people died. Then in October we went to Sarajevo, this place of awful war and siege, where 10,000 people died. That was quite different because it was human brutality. And then in December I went to Connecticut, where twenty children were killed by this crazed gunman. In each of those places I had spent time with the victims, the helpers, the families. So in my hotel room in Kazakhstan I started making a list of the people I had met and what we had talked about.

So the book deals with those three examples of suffering?

There are three large chapters, and then an introduction and a conclusion. The three large chapters start out with a journalistic account of what I encountered in those places. I tell about the people that I met in Japan, for example, and what the landscape looked like, and then I try to draw from their experiences about what helped.

I draw upon something Mr. Rogers once said about making sense of disaster –

Look for the helpers!

So I wrote this book pretty quickly – for me, anyway – in a few months. It’s not a full-length book. It’s 30,000 words as opposed to 80,000. So I started talking to publishers who liked it, but couldn’t have it out until Easter 2014, or maybe if they really pushed, by the anniversary of Newtown. And then one disaster after another started happening –- Oklahoma tornados, the Boston marathon bombings, wildfires, earthquakes. I started talking with my agent, Kathy Helmers. Publishers said that they certainly couldn’t get the ebook out before the hard copy because it would alienate bookstores. But we could do it. If the ebook didn’t go anywhere, nobody would know about it. And if the ebook took off, it would only help the print edition. 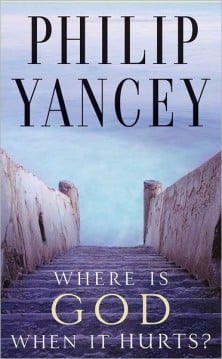 And Zondervan is bringing out the print edition in December?

What was behind that, Jana, was that when I went to Newtown, I called Hachette and Zondervan to make copies of my previous books available for free to the people of Newtown. Hachette shipped a couple thousand copies of What Good Is God? And Zondervan did that too – and they made it available for free for two weeks on the Kindle, all around the world. Zondervan went to all their [digital] platforms and offered it anywhere in the world for two weeks as a free download.

Not a single ad was placed, not even a $40 Facebook ad. There wasn’t time. I put an announcement on Facebook. My wife thought maybe 1,500 copies would be downloaded. Kathy [Helmers, the agent] thought maybe 3,000 people.

The answer was 100,000 people in just two weeks, 86,000 on the Kindle alone. It went viral. You remember how traumatized the whole nation was at that time.

The next month, after 100,000 free downloads, both the mass market and trade paper editions doubled their previous sales.

So when do we get to see the memoir you’re writing?

I have one other book that is actually under contract that I had been working on until this interrupted it. I call it Dispensing Grace: How to Communicate Faith to a Culture Running Away from It. It’s about the culture thing. How do we demonstrate grace? That’s what we’re supposed to be doing.

I will have that done this year, in November. Next year I will start writing the memoir. I’ve read about 300 memoirs to prepare. I’ve learned a lot from them about how to write one. Also, sometimes reading other people’s memoirs will spark a memory.

What are you reading that you’re excited about?

I read a great story. There’s a man named Martin Goldsmith who did the commentary on classical music on NPR. He wrote a book called The Inextinguishable Symphony. His parents and grandparents were musicians in Germany. His parents were part of a movement by Hitler to start an all-Jewish orchestra. They couldn’t play non-Jewish music, but they could perform. This went on for years.

You talk about trauma! We think we live in perilous times. But if you turn the clock back sixty, seventy years, you’ve got Stalin in the East, Hitler in the middle, Japan on the other side . . . tens of millions of people dying. Human history is a very perilous affair.

Also, the choices we make politically make a huge difference.