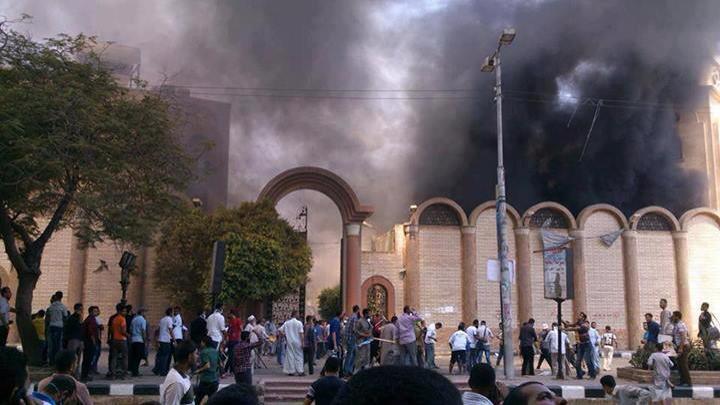 EASTON, Md. – In the wake of a bloody government crackdown on Egyptian protestors that left hundreds dead and thousands injured, SAT-7 Christian satellite television broadcasts from Egypt are bringing a firsthand view of the unethical practices of the Morsi presidency and its sham of “democracy,” with insights and understanding not currently reported  by mainstream Western media.

Amid the ongoing destruction of churches by supporters of ousted president Morsi, Egyptian Christian leaders are responding with reconciliation and forgiveness, stressing that the church is not mere buildings, but rather “the body of Christ” composed of people and their faith in him.

SAT-7 has been covering the political situation since the anti- and pro-Morsi protests began at the end of June, helping viewers better understand and engage with the situation from a biblical faith perspective through its current affairs programming, broadcast live from Egypt.

In his June 2012 election, Morsi received only 13 million votes from the Egyptian population of 83 million, according to Terence Ascott, CEO and founder of SAT-7 International (www.sat7usa.org) in a recent commentary (www.ow.ly/nXTsz).

Taking wide-sweeping power without censure, he filled key government positions with former Muslim Brotherhood leaders, some of whom had previous convictions for violence or incitement to violence, and rushed through a pro-Islamic constitution despite protests and boycotts from liberals, moderate Muslims and Christians, said Ascott.  Morsi refused to call for new elections, as he had previously agreed to do after a new constitution had been adopted.

Into this political scenario, with a failing economy and crumbling infrastructure, while as many as 30 million people protested during Morsi’s first anniversary, the army responded and removed him from office, said Ascott.  Following an ensuing six weeks of pro-Morsi occupation of public squares, demanding his reinstatement, blocking all traffic and promising retribution against the army, police, liberals and specifically Coptic Christians, deadly violence broke out August 14 as the army moved in to disburse them.

“The Muslim Brotherhood has been very effective with the Western media, portraying themselves as ‘victims’ and the army as a coup,” said Ascott. “This is not the version of the truth that resonates with the vast majority of Egyptians.”

Scores of business, homes, police stations, hospitals and other public buildings have been destroyed by Morsi supporters. At least 40 churches, a monastery, three religious societies, three key Bible Society bookshops, three Christian schools and an orphanage have been burned or otherwise destroyed.

"Following [Coptic Orthodox] Pope Tawadros II’s statement that the current attacks on churches were expected, many Christians are stating that they consider the church buildings a sacrifice to their beloved Egypt,” said Farid Garas, SAT-7’s Egypt executive director.

Some Muslims who rushed to help preserve churches and Christian properties were urged by Christians to return home. “Buildings can be rebuilt, but you are priceless, so stay safe,” they reportedly said. “Buildings are not the church. The Body of Christ is the church, and we are firmly intact.”

General Sisi, commander-in-chief of Egyptian armed forces and Minister of Defense, subsequently announced the army will pay for renovating all the damaged churches.

SAT-7’s staff in Cairo has worked from home, and all are reported safe. According to Garas, they plan to broadcast their current affairs program “Bridges” as usual on Saturday, to cover the attacks on churches and the decision of Christian leaders to refuse outside protection, showing that the church is standing for freedom over force.

“It seems we are experiencing a pruning process of the living body of Egypt,” said Garas.” It hurts, but it is important. We are sure we will see the fruit of freedom, and we trust the Creator who is in control.”

Prayers are requested for Egypt, the largest country in the Arab world with the largest Christian community in the Middle East:

Since 1996, SAT-7 has brought quality Christian television programming via satellite to more than 15 million viewers throughout the Middle East and North Africa. With international headquarters in Cyprus and five channels, SAT-7 broadcasts in Arabic, Farsi, and Turkish, enabling viewers to join a global fellowship of Christians within the privacy of their own homes. Audience relations specialists are available throughout these regions to counsel and pray with viewers. For more information, visit www.sat7usa.org.

Photo: St. George Church in Sohag, Egypt, is one of at least 40 churches attacked and burned by pro-Morsi protesters in violent response to the deadly crackdown by the Egyptian government. Following a six-week sit-in demanding the reinstatement of ousted Egyptian president Morsi, supporters carried out their violent threats on police, army, liberals and specifically, Coptic Christians.