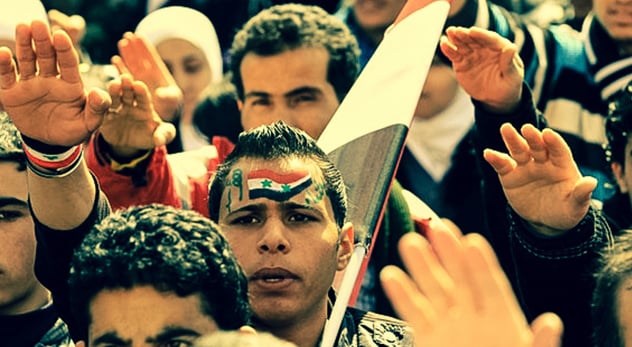 I'm not persuaded that military strikes against Syria are the right course of action.
September 10, 2013
Jana Riess

I'm not persuaded that military strikes against Syria are the right course of action.

Like many people around the world, I've been watching the newswire with a combination of dread and resigned anticipation these last two weeks. It seems we are about to attack Syria, and I am uneasy.

I am uneasy because my beloved president is saying that we need to punish Syria for flouting the Geneva Convention and international law by using chemical weapons on its people. Fair enough, but it seems that in order to do this, the United States will also be flouting international law by attacking a sovereign nation that has not attacked us, and doing so without the support of other nations.  As Time magazine put it,

The fundamental rule of contemporary international law is that states cannot attack other states. The U.N. Charter embodies this rule and makes only two exceptions to it: a state can attack another state if it is authorized to do so by a Security Council resolution, or if the attacking state is acting in genuine self-defense.

Neither of those exceptions applies in this case, so why is the United States proceeding? It's not like we don't have two recent and rather disastrous examples of unilateral U.S. military action against nations that have not attacked us (Afghanistan and Iraq). While there is certainly more credible evidence today that Assad used chemical weapons on his people than there was evidence ten years ago that "weapons of mass destruction" were hiding in Iraq, the U.S. is once again rushing in where angels fear to tread.

President Obama and others have cited the example of World War II and Hitler to support their case, saying that it's important to nip humanitarian abuses in the bud now rather than allow a dictator like Assad to consolidate his power still further and oppress his people. However, I don't find this a terribly compelling historical parallel. In the late 1930s, Hitler was assiduously spreading his empire throughout Europe -- reoccupying the Rhineland, annexing Austria and Czechoslovakia, mobilizing Germany for major warfare, and terrorizing the Jews in all the areas he occupied. In contrast, Syria is not attacking its neighbors but its own people in a vicious, multi-sided civil war.

That civil war is terrible, and thousands of people are dying -- not just the 1,400 Syrian citizens who are dead from chemical weapons but tens of thousands more from bullets and bombs. But that still doesn't make it right or wise for the United States to act unilaterally in policing other nations' civil wars.

I would not describe myself as an isolationist; I believe there are times when it is morally justifiable for one nation to intervene militarily even when other nations do not join in. In the case of Syria, for example, it is possible that Russia, a longtime ally of the Assad regime(s), has blocked international approval of military action against Syria even though the UN Security Council might have gone forward with it. We do not know. In fact, there is far more that we don't know than we do know, which is why I see watchful non-intervention as our best option for the moment.

And that's to say nothing of the way a U.S. attack might further destabilize our relations and reputation abroad while achieving no tangible positive outcomes in Syria. As Max Fisher pointed out recently in the Washington Post,

The military options are all bad. Shipping arms to rebels, even if it helps them topple Assad, would ultimately empower jihadists and worsen rebel in-fighting, probably leading to lots of chaos and possibly a second civil war (the United States made this mistake during Afghanistan’s early 1990s civil war, which helped the Taliban take power in 1996). Taking out Assad somehow would probably do the same, opening up a dangerous power vacuum. Launching airstrikes or a “no-fly zone” could suck us in, possibly for years, and probably wouldn’t make much difference on the ground. An Iraq-style ground invasion would, in the very best outcome, accelerate the killing, cost a lot of U.S. lives, wildly exacerbate anti-Americanism in a boon to jihadists and nationalist dictators alike, and would require the United States to impose order for years across a country full of people trying to kill each other.

Also, there is the domestic question of the state of our own American democracy. In July, former president Jimmy Carter made a comment -- largely unreported since then -- that "America has no functioning democracy" at present. He was not referring to despotic decisions about military action, but I worry that his criticism is particularly applicable here. There is a reason why that quaint, pesky Constitution of ours requires a vote of Congress to declare war. But presidents from Truman forward have circumvented this provision, making FDR the last president to ever appear before Congress to request a declaration of war. What does it mean for a democracy's future when a single leader can functionally create a situation of war? How is that democratic, exactly?

When Obama addresses the nation tonight, he's going to have to persuade me that he's doing the right thing. As of right now, I just don't see it, though I could certainly be wrong about this.