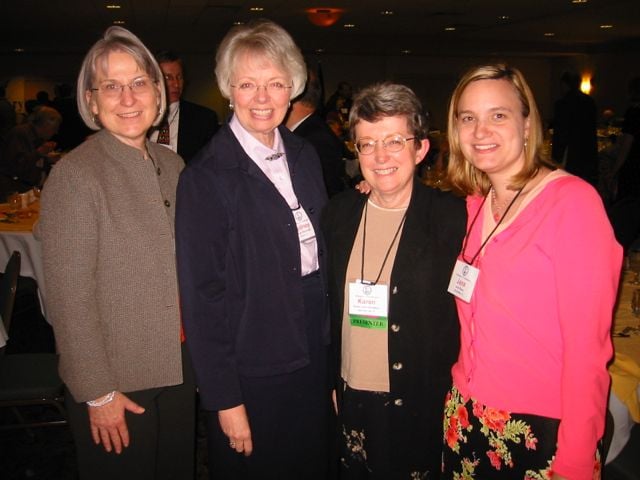 Kathleen Flake (Left) at the Mormon History Association conference in 2005, with Sydney S. Reynolds, Karen Lynn Davidson, and me.

The New York Times reported yesterday that Kathleen Flake, currently a professor of American religious history at Vanderbilt Divinity School, has been named the inaugural Richard Lyman Bushman Chair in Mormon Studies at the University of Virginia. UVA's new Mormon Studies program will be enriched by having Flake at the helm, given her outstanding scholarship and reputation.

Readers of this blog have probably seen me reference Flake's game-changing book, The Politics of American Religious Identity: The Seating of Senator Reed Smoot, Mormon Apostle, and cite my eager anticipation of her work in progress, about women and authority in Mormon history.

Mormon Studies is flourishing. This week I am working on an article for Publishers Weekly about recent, current, and forthcoming academic books in the field of Mormon Studies. In the course of my research I have uncovered several I had not heard of before, by authors I've never met; ten years ago the field was so small that I could keep up with every book and author.

Today, university presses and other scholarly publishers have been opening up to this emerging field partly for content reasons (Mormon Studies is fresh and original) and partly for sales reasons (Mormons and non-Mormons like to buy books about Mormons). With Oxford University Press leading the way (new next month from OUP: Stephen Webb's Mormon Christianity, which I hope to cover eventually on the blog), there is a growing body of quality scholarship addressing diverse aspects of Mormon history, theology, sociology, and literature.