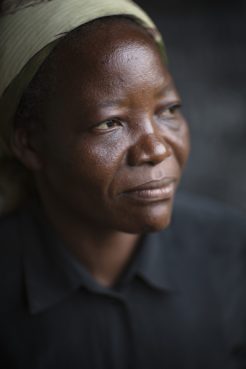 Sister Angélique Namaika, the 2013 UNHCR Nansen Refugee Award laureate, photographed after a literacy class she instructs near the town of Dungu, Orientale Province, Democratic Republic of Congo on Aug. 1, 2013. She assists displaced women and girls who have been forced from their homes by armed groups — including the Lord’s Resistance Army. It’s estimated that more than a half million people have been forced from their homes — and 70 percent of those by LRA-related activities or the threat of attacks. Photo by Brian Sokol / courtesy UNHCR

(RNS) Angélique Namaika, a Roman Catholic nun, rides a bicycle on the rutted roads of the Democratic Republic of Congo’s northeastern province of Orientale, which is plagued by rebel violence.

On these same roads, the Lord’s Resistance Army, a Christian rebel group led by Joseph Kony, a self-proclaimed prophet of God, has been killing, abducting and mutilating women and children.

But none of that has deterred Sister Namaika from helping displaced women learn trades, start small businesses and go to school.

For her fearlessness and dedication, the United Nations High Commissioner for Refugees last week awarded her the 2013 Nansen Refugee Award.

The award, established in 1954, recognizes extraordinary humanitarian work on behalf of refugees, internally displaced or stateless people. It comes with a commemorative medal and $100,000, which she will receive Sept. 30 in Geneva. She meets with Pope Francis in Rome two days later.

Through her organization, the Centre for Reintegration and Development, Namaika has changed the lives of more than 2,000 women and girls forced from their homes and abused by the LRA. Many of those she helps recount stories of abduction, forced labor, beatings, murder, rape and other human rights abuses.

Namaika teaches them cooking, baking and sewing. The women grow vegetables on a communally owned field.

“When they work together on the fields, they are able to stay together,” she said. 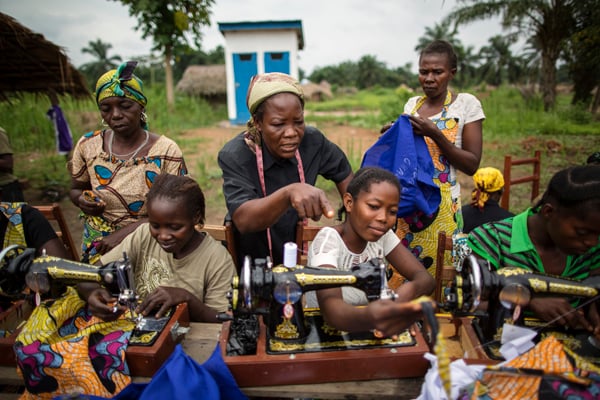 This year’s Nansen Award winner Sister Angélique Namaika (standing, in black) assists women with the clothes they are making at the Maison de La Femme in the town of Dungu, Orientale Province, Democratic Republic of Congo on 1 August, 2013. Sewing is one of several income-generating skills that Sister Angélique teaches to women in order to help them to become more financially self-sufficient. Photo by Brian Sokol / courtesy UNHCR

She also instructs women and children in the less tangible but as important skills of negotiation and marketing.

“I teach them how to communicate in the local language so that they can be able to sell their products in the markets,” she said. “If their cooking is good, they can find jobs in local restaurants. If they can bake every day they can have a consistent income.”

Namaika was herself displaced by the violence in 2009. She had been living in Dungu in the province of Orientale but was forced to flee to the camps by the LRA’s persistent attacks.

The LRA got its start in northern Uganda, but it has been pushed out and now straddles a remote and densely forested border region of Congo, the Central African Republic and South Sudan.

Some of its captives escaped to find refuge in the villages or in towns like Dungu. Many of the traumatized survivors, who need support and skills to start a new life, have turned to the 46-year-old nun who came to the region in 2003 from the capital, Kinshasa.

The announcement of the 2013 Nansen prize coincided with the release of a report about life for those displaced by LRA violence. 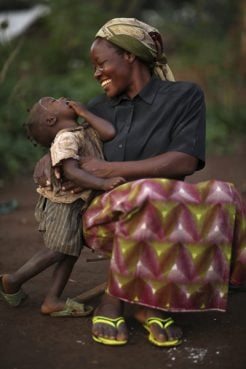 According to the report, since 2008, more than 320,000 people have been forced to flee the province of Orientale — in some cases several times. The report says LRA violence has created severe and long-lasting trauma for both the abductees and those who fled, many who are still too afraid to return home.

Namaika said she is looking forward to meeting Pope Francis.

“I will ask him to help bring peace in my country,” she said. “I want him to talk to leaders here so that they commit to peace. I am going to ask him to pray for Kony, so that he confesses his sins, gives up the violence and goes back to his community.”

With the prize money, Namaika hopes to develop a semi-industrial bakery for the women, which will supply its goods in Dungu and the surrounding areas. She also hopes to acquire more land so each woman can farm her own plot.