The President’s former faith outreach director, Joshua Dubois, has released daily devotionals he sent Obama during his tenure on the campaign and at the White House. (Photo credit: Dotun Ayodeji)

In the midst of the 2008 Presidential campaign, one man—Senator Obama’s Director of Religious Outreach—was concerned about the soul of the future President. Though Joshua Dubois prayed privately for Obama, he was compelled to go one step further, emailing the President a daily devotional reading.

For the first time ever, a collection of those devotionals have been released through DuBois’ new book, The President’s Devotional, Here, we discuss President Obama’s spirituality, many conservatives’ charge that he isn’t really a Christian, and the First Lady’s faith.

JM: You’ve shared a lot of devotional material in this book. Is there one you felt was particularly influential on the President?

JD: Let me start off by saying that I can’t speak for the President. He has said many times how meaningful the devotionals have been to him. And I’m honored that he would say that. I think, though, however, that there are some that are particularly resonant, particularly those that weave in history and culture together with Scripture to make a point. So there are a few.

There’s one that’s about British Prime Minister Lloyd George. And it’s basically about how to approach tough times. Lloyd George was in the middle of several different conflicts at once: he had World War 1 to worry about, along with the Irish Republican Army, and a financial crisis. And he still kept a very positive countenance. And someone asked him, “How are you so happy all the time, with all this going on?” He responded, “A change of nuisance is about as good as a vacation.”

So I just use that to illustrate the same point in the book, that suffering produces endurance, and endurance character, character, hope. We must look at the challenges we’re facing as opportunities to add to our set of experiences and our wisdom rather.

I think that’s one that resonated with the President. Obviously, ones on Abraham Lincoln as well. He’s a jazz fan, and so there’s one about Nina Simone and King David and their ability to write their own lyrics to their lives in challenging times.

JM: When was the moment in your tenure that you felt the President was at his spiritual lowest and what did you write in your devotional to try to lift his spirits?

JD: I would go back to when I first started writing. This was a moment during the 2008 Presidential campaign, I was the Director of Religious Outreach at the time, and I saw him—then Senator Obama—as someone who had tremendous faculties. He was intelligent, he was a strong leader, he had a lot of support around him as well—political support and policy advice. And even Secret Service protection! But I didn’t see a lot of folks who were thinking about his spirit, his soul. And those were particularly tough times. We were dealing with the worst economic crisis of our lifetime. Senator Obama had to respond to that as a candidate. We were dealing with attacks from the other side, his political opponents. And it was at that moment that God kind of tugged at me and said, “Instead of just praying for him privately, by yourself, why don’t you reach out to him? Why don’t you share an encouraging word with him?” So that was kind of how the whole thing got started.

I can’t speak for him and say that that was necessarily a low moment, but it was definitely a time when he was going through a number of challenges.

JM: A lot of conservative evangelicals questioned the authenticity of the President’s Christianity. They argued, for example, that you can’t be Christian and pro-choice. How did these accusations make you feel and how do you answer these critics as one who has seen the spiritual side of Barack Obama firsthand?

So I don’t think the President spends much time thinking about those critics. It seems, to me, to run counter to the gospel—that speaking for someone else’s faith—that I think should give pause.

The President is a committed Christian, someone who’s taken his faith very seriously for a very long time, and I’ve been honored to witness that firsthand.

JM: Joshua, what does the public not know about President Obama’s faith life? 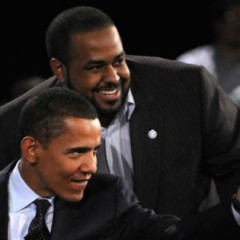 “The Washington Post” reported, “Obama has often mentioned the inspiration he finds in DuBois’ daily Scripture e-mails, making the faith-based office director an informal spiritual adviser to the president.”

JD: I think that, in careful and quiet ways, he has really sought to grow in his faith: through reading these devotionals every morning, attending worship services as often as he can—particularly at St. John’s Episcopal, right across the street from the White House. I’ve been with him as he walked his whole family over to church.

There are also other little things: he calls pastors, from time to time, to come into the Oval Office to say a word of prayer over him. Every year on his birthday he convenes a conference call with pastors around the country to offer some advice and blessings for the year to come.

So I think there are lots of these little moments. The one I talk about in the book is the time we went down to Billy Graham’s house. Obama has been the only sitting President to actually visit Rev. Graham at his home. To be in that room with those two amazing men, to hear Rev. Graham pray for President Obama, and hear President Obama pray for Rev. Graham, was just a really unique and remarkable moment.

JM: And some of those pastors he has reached out to, inviting them to come pray with him in the Oval Office, who are some of those?

JD: There are a number of them. Pastor Joel Hunter from Northland Church, in Longwood, Florida, is a dear friend and someone that has spent a lot of time supporting the President in prayer and conversation.  A.M.E. Bishop Vashti McKenzie is also a very good friend, someone who has offered a lot of guidance over the years. And then Sharon Watkins, from the Disciples of Christ, is someone who has been a real guiding force as well. So there are a number of pastors, but those are a few.

JM: From your experience, does the First Lady share the President’s faith commitment? What does that look like for her?

JD: Yes, the First Lady is a strong Christian as well, and is very serious about her faith. It was wonderful being with her as she talked about her faith and her values at the A.M.E. Church general conference a few years ago. And also being with her when she’s in worship services with the President. And so there’s a strong family there, one that is careful about raising up their children in the way they should go. And it’s been wonderful to see that grow and develop over the last few years.