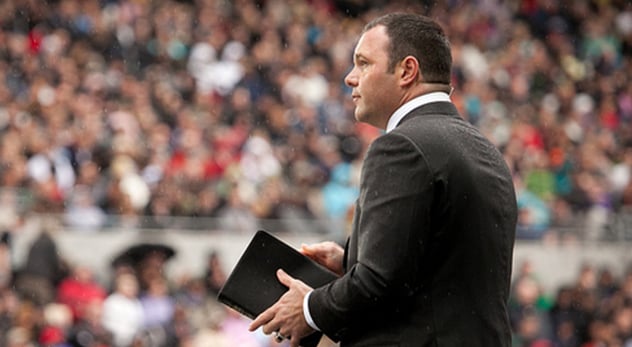 Controversial pastor and #1 New York Times bestselling author, Mark Driscoll, has been called a lot of things: bully, sexist, fundamentalist, bigot, and even “the cussing pastor.” But with the release of his new book, A Call to Resurgence: Will Christianity Have a Funeral or a Future?, the minister hopes to add a new label to his brassy brand: “peacemaker.”

“The bad news is that Christians don’t even get it, according to Driscoll—they’re stuck in their cul-de-sacs,” a press release for the book stated. “Christians are isolated in ‘tribes’ on the Internet, and they spend too much time lobbing e-bombs at each other in cyberspace.”

But given the pattern of extreme speech that has marked Driscoll’s ministry, one has to wonder whether he’s the man for the job.

In January, for example, Driscoll sent the following tweet during the inauguration of President Obama: 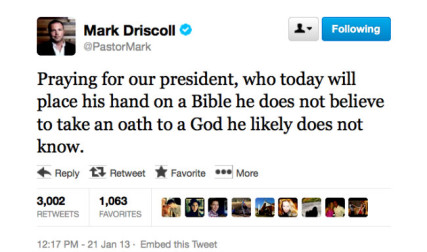 He received thousands of retweets, and offended many Christian Democrats who voted for Barack Obama, who professes to being a Christian.

In A Call to Resurgence, Driscoll resurrects this tweet but he softens the language, stating that the President “placed his hand on a Bible he may not entirely believe.” Driscoll goes on to say, “Obama then took his place as the leader of a nation whose money says, ‘In God We Trust’ without even the courtesy of a punch line to let us know it’s a joke.”

Not exactly the kind of rhetoric that builds bridges and transcends tribalism. The backlash from fellow Christians was so intense that Mars Hill Church’s elders sat Driscoll down to discuss the issue. He later issued a statement saying the comment was “flippant”.

Driscoll’s list of divisive comments run much deeper than these isolated incidents. He has attacked emergent Christians, called yoga “demonic,” said stay-at-home dads are “worse than unbelievers,” compared nagging wives to water torture, and offended egalitarian Christians when he argued that women shouldn’t hold leadership positions in churches because they are “more gullible and easier to deceive than men.”

He famously rules Mars Hill Church with an iron fist, preaching against “sinning through questioning” and once remarked that he wants to “go Old Testament” on dissenters.

When it comes to non-Protestants, Driscoll has joked thusly:

– About a Jew: “I saw a man that I will now refer to as Mr. Goldilocks because he had these sideburns that were Goldilock-esque.”

– About Catholics: “there are weird rules like priests cannot get married, which has not worked out so well”

– On LDS and Muslims: “The Muslims. It got so quiet. Everybody’s like, ‘Oh, man. Can’t we do the Mormons and the under britches, can’t we do anything else?’ No, that’s too easy. We won’t talk about the burkas.”

– On students in religious schools trying to keep the rules: “And you know there was some little Nazi walking around checking. That kid, like, ‘Oh, I’m gonna be a deacon, that’s what I’m gonna be.’”

This same Mark Driscoll who has spent years dividing Christians and insulting almost every kind of people group imaginable now wants to put the kibosh on infighting?

To promote his new message of peace and unity, Mark Driscoll showed up uninvited this past week at the Strange Fire Conference put on by another controversial Calvinist pastor, John MacArthur. The conference was largely seen as an attack on charismatic Christians, calling them blasphemers and even instruments of the devil.

Driscoll wanted to protest the event’s “exclusionary” message and hand out copies of his new book. As you can imagine, it wasn’t long before trouble started. Security officers at the event confronted Driscoll to question his intentions, and he recounted the event with a tweet: “Security confiscated my books.”

Witnesses to the confrontation later disputed Driscoll’s accounts, saying that security merely explained that handing out unauthorized books was prohibited. According to their versions of the exchange, Driscoll offered them the books as a “donation.” A video posted online confirms that the security officers accepted the books only after repeated attempts to refuse them. It’s the kind of public spectacle that runs counter to the message of inclusion Driscoll claims to be promoting.

I’m reminded of a famous quote attributed to Albert Einstein: “You cannot simultaneously prevent and prepare for war.” In the same way, Driscoll cannot continue to take cheap shots at those with whom he disagrees and simultaneously play the peacemaker. You can’t call a truce while firing a cannon.

I hope that Driscoll is having a change of heart, that he is reconsidering his past behavior and changing course. But the book’s jabs and the way he’s chosen to promote it seems to align more with the pattern of behavior he’s displayed for years.

So I agree with Driscoll’s book on its core message—Christians should learn to pick their battles better—but with such a long pattern of divisive rhetoric, name-calling, searing sarcasm, and downright offensive insults, I’m not convinced he’s the right messenger to carry it forward. If Mark Driscoll wants Christians to stop infighting, maybe he should start with himself.

News
Jeff Chu on the daunting charge to finish Rachel Held Evans’ final book
Follow us on Facebook!
Submit your photos to RNS