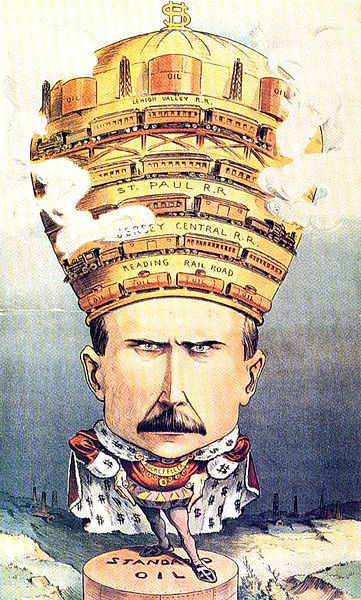 In the last gilded age, some of the malefactors of great wealth, as Teddy Roosevelt called them, turned to philanthropy. This did not sit well with everybody.

When Baptist John D. Rockefeller got all ecumenical and gave $100,000 to the Congregational Board of Missions in 1905, Washington Gladden, the nation's foremost Congregational preacher and longtime scourge of the Standard Oil Trust, called the money "tainted" and demanded that it be returned. A few years later, cries of "tainted money" again rang out when, in the midst of government's antitrust suit against Standard Oil, Rockefeller sought a national charter to establish the Rockefeller Foundation as a Great Charitable Trust to manage his good works.

After the 1914 Ludlow Massacre, when hired militiamen gunned down dozens of coal miners striking a Rockefeller-owned mine in Colorado, strike leader and United Mine Workers official John Lawson testified to Congress that in addition to indifference to the conditions of workers, there was another cause of industrial discontent that "also flows from a Rockefeller source."

This is the skillful attempt that is being made to substitute philanthropy for justice. There is not one of these foundations now spreading their millions over the world in showy generosity that does not draw those millions from some form of industrial injustice. It is not their money that these lords of commercialized virtue are spending, but the withheld wages of the American working class.

Frank Walsh, the fiery lawyer who headed the congressional investigation into the Massacre, declared that the setting up of scientific or social work foundations would lead to a condition of "loyalty and subservience" to men of wealth and to their interests "from the whole profession of scientists, social workers and economists." Already, he said, there were "thousands of men in these professions receiving subsidies, either directly or indirectly, from the Rockefeller Estate." No sensible person could believe, said Walsh, "that research workers, publicists, and teachers can be subsidized with money obtained from the exploitation of workers without being profoundly influenced in their points of view and in the energy and enthusiasm with which they might otherwise attack economic abuses."

Not only did the Rockefeller Foundation fail to get its national charter (it ended up incorporating in New York State), but, more importantly, it learned the importance of engaging high-level professional staff and giving grants to organizations independent of foundation control. As Rockefeller adviser Raymond Fosdick (brother of the liberal minister Harry Emerson Fosdick), wrote, "In no other way could the objectivity of research be established beyond cavil and the projects freed from suspicion of ulterior interest."

In the current gilded age, such concerns and lessons seem to have all but disappeared. Yesterday's New York Times ran "Goldman, Buying Redemption," an article by Susanne Craig on the philanthropic activities of Goldman, Sachs suggesting that the purchase has been successful. Yes, as the subhead declared, the firm's "big splash of philanthropy prompts critics to ask: How much is too much?" But the criticism merely had to do with the $2 million salary of Dina Powell, head of the Goldman Sachs Foundation, and Warren Buffett's objection to doing good works with investors' money. That there might be something problematic in a misbehaving $1 trillion financial giant restoring its image through philanthropy did not seem to occur even to Barney Frank, who told the Times, "I am glad they are doing it."

Goldman, it should be emphasized, is merely following a pattern increasingly common since the 1980s, when former Treasury Secretary Bill Simon and other leading conservatives began foundations and think tanks for not advancing the economic and political agendas of their founders. What was needed were foundations and think tanks that did exactly that -- and voila! Simon and his pals created them. But as Frank Walsh recognized, philanthropic work with an overt ideological agenda may be the least of it. Consider the medical institutions funded by the Koch Brothers and how such finding may affect the points of view and the energy and enthusiasm with which the beneficiaries the problems with health care in America.

Tainted money? These days, it's take the money and run.