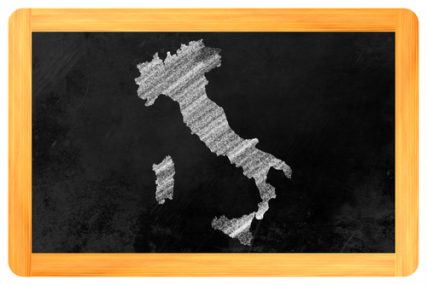 Italy, chalk drawn on a blackboard

ROME (RNS) For the first time in history, the entire class of one Italian high school opted out of an elective on Roman Catholicism earlier this month, reopening a long-standing debate over whether state money should be used to fund a class that focuses on a single faith.

Church attendance in Italy has been declining for years, but the country remains — at least on paper — the most Catholic in Europe.  It is also a focal point for the world’s Catholics, as the home of the Vatican and the papacy.

That is what made the decision at Christopher Columbus High School in the northern port city of Genoa so unusual.

Until 1986, a course on Catholicism was obligatory for students. Now they can opt out of what is called the “Ora di religione” (religion hour), but most — around 91 percent, according to sources — take the course, which focuses on church history and traditions.

That’s around the same percentage of Italians who consider themselves Catholic (of those, 30 to 40 percent identify as “active” Catholics). Yet despite the apparent popularity of the course, critics wonder why state-run schools are funding the class.

“It would be easier for me to understand this course if it was a survey of world religions, or a course on spirituality or ethics,” said Fabio Milito Pagliara, a teacher and official from Italy’s Union of Atheists and Agnostics. “What about a course on citizenship? I just don’t think the state should be in the business of endorsing one specific faith.”

According to the Rome-based polling firm Opinioni, those who agree with that point of view are on the rise in Italy — though they remain a relatively small minority. Fifteen years ago, little more than one in 10 Italians thought the “Ora di religione” was in need of reform. Now, nearly one in four do, said Opinioni co-director Maria Rossi.

Supporters of the course say it is important because the Catholic Church is so dominant in Italy.

“The course isn’t trying to convert anyone, and if you live in Italy you will not understand the country unless you understand the Catholic Church,” said Nicola Incampo from Cultura Cattolica, which provides church-related information resources to schools. “You don’t have to be Catholic for that to be important.”

The Rev. Gabriele Mangiarotti of the Diocese of San Marino Montefeltro agreed.

“These courses have value for everyone,” he said. “If I want to understand St. Francis, or Dante, or Michelangelo, I have to understand the church. I honestly believe that students who opt out of the ‘Ora di religione’ are less prepared than the ones who take the course.”

Another complaint many critics cite about the “Ora di religione” is that the level of teaching is uneven, varying widely from school to school and even from classroom to classroom. And students say that since they are not graded on what is taught in the class, many of their classmates sit through the lectures playing games on their smartphones, sending text messages or studying for other courses.

Emanuele Di Fronzo, a retired education official, acknowledged those problems are real and probably on the rise. But he said lack of funding prevents schools from improving the “Ora di religione” so that it is more engaging.

Education spending holds steady or is reduced almost every year, he said, and so quality suffers. That makes improving the course difficult.

“When money is limited, the least expensive course of action is usually to make no change at all,” Di Fronzo said. “There are good arguments on all sides of the debate, but it’s an economic issue. I would not expect significant changes to be made unless new money appears.”

News
In new book, Pope Francis addresses COVID-19 and politics, with an eye to the US
News
Vatican cardinal says ouster deprived him of possible papacy
News
A blue surprise? As Arizona trends toward Biden, Latino voters stand out
Opinion
Joe Biden will remove the ‘bully’ from the bully pulpit
News
Taco trucks and voter guides boost political profiles of faith communities at the margins