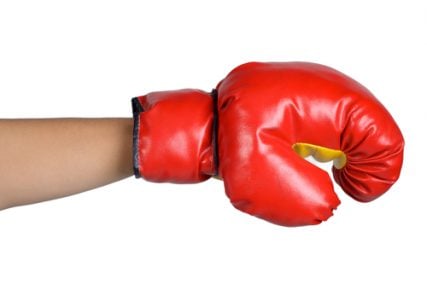 I had problems with a couple of this fall’s General Conference talks, most notably Elder Christofferson’s pedestal-pumping ode to sweet nineteenth-century femininity and Elder Oaks’s painfully black-and-white assessment of the alleged evils of same-sex marriage.

Given those talks’ existence alongside compassionate, informed, loving reflections by Dieter Uchtdorf and Jeffrey Holland (as some of us discussed here earlier this month), it was a very up-and-down Conference for many.

One friend told me that Conference was like a whiplash-inducing tennis match. Another, who has been a good Mormon for decades, said that Elder Oaks’s talk made her wonder whether “there really was room for me to use my brain and make my own prayerful decisions on certain topics . . . I felt like he was saying that no ‘real’ Mormon can condone the legalization of same sex marriage.”

Elder Oaks’s talk resulted in significant sadness and wondering aloud. The best of these ruminations that I saw online was from Steve Evans over at By Common Consent; he raised thoughtful questions, and gently challenged Elder Oaks’s apparent certainty that the Church will never change its position on same-sex marriage as it has changed its policies on other issues.

Contrast that approach to a letter that has surfaced on the Internet this week. Written shortly after Conference, this dispatch to Elder Oaks does everything short of calling the man a Nazi. Some choice snippets:

[tweetable]One wonders, after reading this letter, just who is the “hate-filled bully” spewing vile rhetoric.[/tweetable] 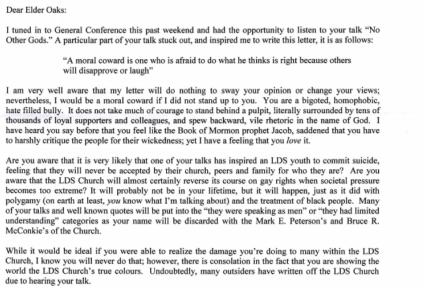 I don’t know the author of this letter personally, but since he has posted his missive (missile?) — as well as Elder Oaks’s terse response — publicly with his name attached, I’m assuming that he wants the world to know about this correspondence and to comment on it.

So here is my comment: This letter was unfair, even cruel.

I’m getting the sense from the online commentary that many readers are focused on Elder Oaks’s official response, which took all of four sentences. Some are outraged that this brusque reply seemed to pull rank; Elder Oaks told the dissenter to get his life in order, counsel with his stake president, and stop violating his temple covenants. (I am guessing by this last that he meant no one is to speak ill of the Lord’s anointed.) It’s also controversial that the Church pulled this guy’s file and gathered bits of his history before replying, which some see as an abuse of ecclesiastical authority.

Still others are wondering why, when the Church regularly receives far more reasonable and well-considered complaints from faithful Mormons about all manner of issues, this is the protest that gets a response at all. It’s an excellent question. [tweetable]Are extreme positions the only ones that will be taken seriously by Mormon leaders?[/tweetable]

But I think that focusing on the official response is less important than taking a hard look at the inciting incident. Was Elder Oaks’s reply patronizing? Probably. But how could it not be, given the tone that the original letter-writer set in accusing him of all manner of hatred and bigotry? Who wouldn’t respond to such a nastygram with profound irritation?

It’s one thing to disagree with LDS leaders, and to speak plainly and pointedly about the reasons why. Such discussions can elevate our people’s reflections about important issues. I have no problem with any Mormon writing an open letter expressing dissent on any topic; the more transparent our discourse, the better. Bring it on.

But we do not call each other horrible names, or blame total strangers for the deaths of children. We focus on issues, not personal attacks. We behave like grown-ups.

And we remember, always, that there is a human being on the receiving end of every letter — in this case, someone who has done much good in the world and deserves basic respect whether we agree with his political and social positions or not.