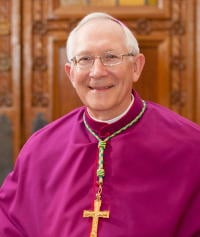 Pope Francis' choice as the next archbishop of Hartford, Toledo Bishop Leonard Blair, is cut from the same episcopal cloth as most of John Paul II's and Benedict XVI's American appointees.

Describing the appointment as a "countersign," National Catholic Reporter blogger and Connecticut native Michael Sean Winters grumped, "This was a missed opportunity to send a signal to all the bishops in the United States that the Holy Father is calling for a different style of pastoral leadership in the Church." Lauding Blair for his managerial skills, Whispers in the Loggia's Rocco Palmo  Blair called him "a figure none would mistake for being part of the USCCB's centrist or progressive blocs."

A longtime Vatican apparatchik, in Toledo Blair has been notable for standing with the forces of doctrinal control and hierarchical enforcement. In 2009, he was one of those bishops condemning Notre Dame for inviting President Obama to speak at commencement. The same year, he was tapped by the Congregation for the Doctrine of the Faith (CDF) to head its "doctrinal assessment" of the Leadership Conference of Women Religious (LCWR), the organization representing most American nuns. His two reports set the stage for the CDF's current project of subordinating the LCWR more closely to "the teachings and discipline of the Church."

In a video made last year, Blair looks and sounds like he's been sucking on a lemon as he defends the effort "to remedy significant and longstanding doctrinal problems connected with the activities and programs of the LCWR." In his bill of particulars, he attacks the organization for giving its 2012 Outstanding Leadership Award to Sr. Sandra Schneiders, retired professor of New Testament studies and Christian spirituality at Santa Clara University. Schneiders, said Blair, "has expressed the view that the hierarchical structure of the church represents an institutionalized form of patriarchal domination that cannot be reconciled with the Gospel."

In her acceptance speech, Schneiders had this to say:

Given the project that is Religious Life it is not at all surprising that this lifeform has generated, and is still developing, a form of Gospel leadership which is increasingly emerging into public view as a genuine alternative to ecclesiastical or secular leadership defined as dominative power... This kind of servant leadership in this kind of Gospel community is as baffling to those in power today as was Jesus' mode of leadership to the Temple hierarchy and the Roman Empire of his time.

Addressing a ministry conference at the University of Dallas last Friday, Cardinal Óscar Andrés Rodríguez, one of the pope's group of eight advisors, laid down the Franciscan line on the role of the ecclesiastical power structure. "The Church is not the hierarchy, but the people of God," he said. "The hierarchy has no purpose in itself and for itself, but only in reference and subordination to the community. The function of the hierarchy is redefined in reference to Jesus as Suffering Servant, not as “Pantocrator” (lord and emperor of this world); only from the perspective of someone crucified by the powers of this world it is possible to found, and to explain, the authority of the Church."
It's hard not to see what Rodríguez had to say as being closer to Schneiders' point of view than to Blair's. For his part, Pope Francis reaffirmed the canonical investigation of the LCWR in April, but in August seemed to minimize its significance. "Perhaps even a letter of the Congregation for the Doctrine (of the Faith) will arrive for you, telling you that you said such or such thing," he told a delegation of Latin American priests and nuns. "But do not worry. Explain whatever you have to explain, but move forward."
In his self-introduction to Hartford yesterday, Blair emphasized the importance of helping to bring the estranged back into the church, of addressing the needs of the poor, and of reaching out those of other religious traditions. The thing about yes-men is that, whoever's in power, they tend to say yes.