This week marks the anniversary of my mom's cancer diagnosis, and it's been tough not to revisit the particulars of our family's roller coaster ride last fall and winter. [tweetable]Why are grief anniversaries so difficult?[/tweetable]

It started in early October when Mom told me she had a breast infection that looked like mastitis but was probably a wasp bite or rash of some kind. The primary care doctor didn't think it was anything, but when it didn't respond to antibiotics, he sent her for a mammogram. And then . . .

"I don't think it's anything to worry about, but the mammogram isn't showing much, so let's do a biopsy," said the radiologist. And then . . .

"The biopsy looks clear! Praise God! It isn't cancer," concluded the surgeon based on what he'd seen with the naked eye. And then . . .

"Well, actually, it's not only cancer but it's the worst kind of breast cancer you can get, and it's in two different sites in the breast so far," said the oncologist. And then . . .

"The PET scan is clear! The cancer has not spread outside the breast!" And then . . .

"The cancer seems to have spread to the spine, bones, skull, kidneys, and lining of the brain. We're not sure why it didn't show up on the PET scan." And then . . .

From that first phone call about a breast infection to the day of Mom's death just after the New Year was three months; and from her cancer diagnosis around Halloween to her death, just two months. So fast. 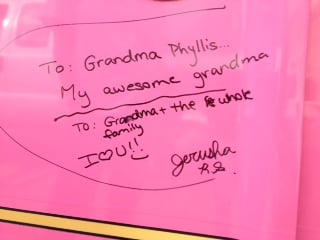 This time last fall, I was trying to go about my business with a demanding new job and the usual round of parenting and life. I was thrilled to hear, in mid-October, that the surgeon who performed Mom's biopsy didn't think it was cancer. But apparently there was a part of me that didn't quite believe the good news, because a couple of weeks later -- the day before Mom called to say that it was in fact cancer -- I had a strange dream.

It was one of those dreams where in the dream you are sleeping in your own bed, just as you are in physical form. My dream self woke up to find my mom sitting in the reclining chair next to the bed, munching on something crunchy.

"Mom?" my dream self said groggily.

"Jana, I have trauma cancer," she said. She was calm, still snacking, but looking at me with love and concern.

And then I woke up. There was no mother in the chair, and I had a horrible sensation that the foundation of our lives was about to shift. The next day, Mom called during lunch to give me the news.

"Trauma cancer" isn't a real medical diagnosis, but it is certainly an emotional one. It's a reminder of how quickly our lives can change. And the changes are irrevocable as the stuff of nightmares becomes our new, unwelcome waking truth.

This season, as I muscle through the anniversary of her diagnosis and all the grim anniversaries that will follow (first neurological problems, hospitalization, holidays, final days, last words) I will be thinking more about the precious gift of life. I don't reflect on that enough -- how life's beauty is more sharply rendered because of life's transience and sheer unpredictability.

I'm grateful that I told my mom often how much I loved her and was proud of her. The photos in this post were taken in late September 2012, just before our whole ordeal started. Phil, Jerusha, and I had gone to a local apple festival where a breast cancer awareness group was allowing people to sign a huge fire truck that they had painted pink in honor of loved ones who had gone through breast cancer. At that point, my mom had survived it twice. We were proud of her, so we made a donation and expressed our feelings with a Sharpie.

For most of this year, I couldn't look at these photos without some bitterness: Even as we wrote those words of encouragement, breast cancer was once again ravaging Mom's body. But now I look at them with love and pride, and I see them as a reminder: [tweetable]Life is short. Make it count, every single day.[/tweetable]