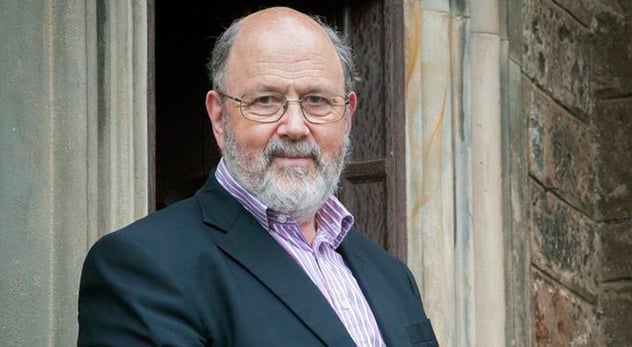 One of today’s top Christian theologians pens the most comprehensive book on the Apostle Paul in Christian history.

N.T. Wright is one of the top five theologians alive according to Christianity Today, and given his accomplishments, it’s a difficult claim to dispute. Wright is currently Research Professor of New Testament and Early Christianity at University of St. Andrews, and before that, he served as Bishop of Durham for The Church of England and taught New Testament studies for 20 years at Cambridge, McGill, and Oxford Universities. He has written a stack of widely-acclaimed and bestselling books, both academic and popular, and has a cult following among young Christian thinkers in the United States and Europe.

But Wright has also become a controversial figure in recent years, igniting a heated debate among American theologians with his so-called “New Perspective on Paul.” Many prominent Christian leaders wrote rebuttals of Wright’s perspective–most notably pastor John Piper, who devoted an entire book to the matter (The Future of Justification: A Response to N.T. Wright).

How does one respond to such controversy? If you’re N.T. Wright, by penning a 1700-page tome on the life and theology of the Apostle Paul–the most comprehensive published work on Paul in the history of Christianity. It’s called Paul and the Faithfulness of God, and it promises to extend the debate he sparked years ago. Here, we discuss the book’s thesis, how it may inform gender and political debates, and what he thinks will make John Piper most upset.

JM: Is it possible to give shorthand to the new way of reading Paul you’ve explored in this book? How would you describe your approach to Paul succinctly?

NTW: I offer a holistic reading of Paul in which the different emphases many have seen, between ‘juristic’ or ‘lawcourt’ thought and ‘participationist’ or ‘incorporative’ thought, are reconciled; in which what some call ‘apocalyptic’ and what some call ‘salvation history’ are brought together in a larger framework of a new-covenant theology; in which Paul’s Jewish, Greek and Roman backgrounds are all taken fully into account. Paul emerges as a three-dimensional figure, passionate about the very Jewish message of Jesus as Israel’s Messiah and the world’s true Lord, and aware that in announcing this message he was engaging with the philosophy, religion and imperial dreams of his day.

In particular, Paul emerges as the one who invented what we now call ‘Christian theology’ – prayerful, scripture-fueled meditation on God, God’s people and God’s purposes – to meet the particular need: a community which had to be united and holy but which lacked the Jewish cultural symbols that had helped the Jews with their version of this vocation. “Theology” as Paul was doing it, and more importantly was teaching his churches to do it, was the way to corporate and individual human and Christian maturity and to sustaining the church in its life and witness.

JM: And how do you anticipate that this historical and theological study of Paul will reframe Christian theologies of salvation, justification, and law?

NTW: The main point is that most second-temple Jews weren’t discussing “salvation” and “justification” in anything like the way later Christians did. They were anxious about how Israel’s God was going to unveil his long-awaited covenant purposes, returning in person to deliver Israel from subservience to pagans and to launch “the age to come”. That, for them, was “salvation”; and “justification”, not that they discussed it much, was about how you could tell in the present who God would vindicate in the future. Their debates focused on how all that would happen, and what they should be doing in the meantime.

I have shown how Paul’s teaching on justification, the law, etc. is best understood as the radical reworking of these debates around the new fixed point: that Israel’s God had returned in the person of Israel’s Messiah and that, in his crucifixion and resurrection, he had not only launched but had also redefined the “age to come”–right in the middle of ongoing and contested history. For Paul, this sovereign, saving act of the creator and covenant God was then being implemented through the work of the Spirit and in the announcement of the “gospel” in the pagan world. We only “get” what he means by “justification” and “salvation” when we put it all in this larger context. Nothing of value is lost thereby from older traditions (though some cherished formulations, themselves unbiblical, will need to be revised in the light of what Paul actually said); but much, much is gained, particularly the large and utterly coherent vision of his whole thought and work.

JM: Your views on these topics have upset some American Christians in the past, particularly those in the Reformed movement. Which parts of this book will John Piper be most upset with?

I think what stands behind some of the ongoing disagreements and challenges which come from that quarter is the awareness that, in locating Paul (and Jesus for that matter) within the world of first-century Judaism, I am invoking the first-century Jewish sense of an ongoing narrative reaching its shocking and unexpected climax. Most Protestants assume that an ongoing narrative is a form of Catholicism, leading to an assumption that all you have to do is to belong to the story and all will be well–and leading thus to a carelessness about the radical inbreaking of the gospel both in history and individual lives. This may indeed be a danger; but it is far more dangerous to ignore the ways in which both Jesus and Paul believed that the Messianic events of Jesus, and the work of the Spirit, were in fact the fulfillment of the ancient covenant with Abraham.

Here’s another irony: I would expect that a Reformed theologian like Dr. Piper would welcome a “covenantal” reading of Paul. Perhaps he yet may. Of course, he has said many times before that he thinks my reading of Paul screens out “imputation” in his sense, and he’s right: Paul doesn’t say what that theory wants him to say. But the underlying meaning Dr. Piper and others are seeking in that theory are, I believe, not only retained but enhanced in the larger and more textually grounded reading which I have offered. I have no interest in maintaining an either/or. I am interested in seeing how what Paul actually says holds together the multiple emphases, which scholars and preachers have discerned, in his writings.

The other thing which I think is underneath the rather sharp opposition, not only from Dr. Piper but from some others, is my insistence–in line with Paul’s own vision of renewed creation in Romans 8 and elsewhere–that Paul saw the gospel and “salvation” not in terms of a “spiritual” escape from the present world but as the transformation of this present world.

JM: Some modern Christians have criticized Paul as “sexist” or even “anti-women.” How does your book inform conversations about gender?

NTW: This view is depressingly shallow. Paul, like the other early Christians and like Jesus himself, lived in a complex world where, despite what some think, many women were able to live independent lives, run businesses, travel, and so on, while many others were part of traditional structures which still curtailed their options. A world much like ours, in fact! Into that, the main message was what Paul says in Galatians 3.28: in the Messiah, Jesus, there is neither Jew nor Greek, slave nor free, no “male and female”. We can see this working out when he refers to Junia as an “apostle”, and in the same chapter (Romans 16) mentions several other women who are in positions of leadership in the church–and where, too, he gives Phoebe the task of taking the letter to Rome, which almost certainly meant that she would read it out and explain it to the house-churches.

At the same time, Paul was a deeply creational theologian, who believed passionately that men and women were created differently and that this God-given difference was not obliterated but had to be navigated appropriately and wisely. As with his political views, so here, he may seem to us to be saying two different things, but this only shows that we are trying to fit him into the Procrustean beds of our late-modern imagination. It’s like criticizing Shakespeare for not writing in 140-character Twitter sound bytes.

JM: You mention Paul’s political views, and in the book, you argue that Paul founded and maintained communities loyal to Jesus  across a world owing allegiance to Caesar. How will your work impact modern Christians’ allegiance to governments, political parties and power structures?

NTW: Just as, in the sixteenth century, western Christians came to the text with certain questions shaped by their culture–and we can now see how much that has caused people to misread him–so now western Christians come to the New Testament with the questions of modern western democracy in our minds, and within that the questions of the “culture wars” of late 20th Century America. Was Paul a Republican or a Democrat? Was he right-wing or left-wing? One of the things we must urgently learn is that our rather shallow polarizations do not at all correspond to the ways in which ancient Jews or Greeks or Romans saw public and civic life.

We too easily grasp Paul saying “obey the government” and assume he was an unthinking right-winger in our terms. Or we latch on to the fact that he says “Jesus is Lord” and assume he will line up with every neo-Marxist movement, eager to overthrow the present authorities. This is naïve.

Paul has a great deal to say about power, government and so on–not so much about “political parties” because that’s a fairly modern idea, one particular localized way of “doing democracy”–but we only understand it all when we really dig deep into his cultural, philosophical and political roots. That’s what I’ve tried to do in this book. My hope is that the book will open people’s eyes to the powerfully subversive early Christian vision of Jesus as Lord, and to the shallow and often self-serving ways in which the western world “does politics”, whether to the right or to the left. One thing is sure: follow Paul, and any idea that “theology” or “spirituality” has nothing to do with public life will be gone for ever.

One of the peculiar things about transatlantic theological debates is that in America people who are right-wing theologically are often right-wing politically, whereas in England theological conservatives are often left-wing politically–though again the “right” and “left” mean different things at different times and places. Paul can help us get beyond the shallow stereotypes and enable us to see what it really means, in geopolitical as well as “spiritual” terms, to say “Jesus is Lord”. And, as pietists have always taught, if he is not Lord of all, he is not Lord at all.

“Go on,” Paul would say. “Think through what that’s going to mean for Christianity in the 21st century.”