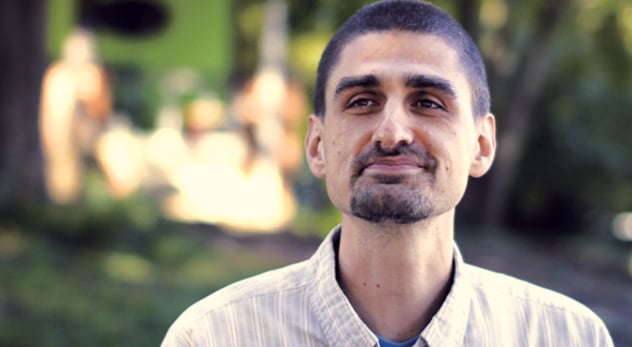 Ten years ago, a group of Christians in Durham, North Carolina, launched a community of hospitality in a historic neighborhood called Walltown. Since then, the Rutba House has welcomed folks who are homeless, returning home from prison and others who just need a safe place to land. Now In his new book, Strangers at My Door: A True Story of Finding Jesus in Unexpected Guests, Rutba co-founder Jonathan Wilson-Hartgrove shares some of the remarkable everyday stories he’s encountered. Here we talk about why he thinks hospitality has declined in Western culture and how we can recover it.

JM: Your community, Rutba House, was inspired when you were in Baghdad during the American invasion. How so?

JWH: In the spring of 2003, we were in Baghdad with a Christian peacemaker delegation. Outside of a town called Rutba, a car in our caravan hit a piece of shrapnel in the road, blew its tire, and careened into the side ditch. Three of our friends split their heads open. When they stumbled out of the ditch to the roadside, they didn’t know what to do. But some Iraqis stopped, took them into their car, and drove them to a doctor in Rutba. This doctor said, “Three days ago your country bombed our hospital, but we will take care of you.” He saved our friends’ lives.

We came back to the US in 2003 telling that story, and the more I told it, the more I realized that it was the Good Samaritan story. The people who were supposed to be our enemies had saved our friends’ lives. They were the Good Iraqis, the Good Muslims. We moved to Durham, North Carolina that summer and started Rutba House as a house of hospitality to put into practice the welcome we’d received in Rutba. In many ways, the past decade of our life has been an attempt to respond faithfully to the gift of hospitality we received at Rutba.

JM: Do you think that hospitality has declined in Western culture? What can Christians do to begin recovering this discipline?

JWH: Humans can’t live without hospitality. But we have tried to professionalize it in the West. Rather than rely on the hospitality of strangers when we travel, we have hotel chains with trusted brands and online reviews. We eat at restaurants where the menu is posted and the prices are all pre-arranged. By placing my order, I agree to the contract by which my daily bread is provided at a set price.

But if you travel to the Middle East, you learn that this isn’t the only way people survive in the world. A friend in Iraq told me that hospitality is a pact in his culture. When I eat at his table, he is not only welcoming me into his home. He is promising to defend my life with his own until the food that I have eaten is digested. I’m not sure whether it’s possible to run a fast-food restaurant if you really believe that.

Friends who’ve challenged my cultural assumptions about hospitality have pushed me to think carefully about a Christian practice of hospitality. What difference does it make if we look for Jesus in the face of strangers who show up at our door? Even asking the question is a discipline that calls for prayerful attention.

JM: Have you ever felt that your safety has been compromised by offering open hospitality? What do you do to maintain both a sense of welcome and safety?

JWH: Yes. Every act of hospitality is a risk. Just as every attempt to love is. We don’t get out of this world without getting hurt. But I think it’s easy to forget this in a culture of risk-management. We’re mostly blind to the ways we hurt ourselves and our families by trying to avoid pain—like the over-protective parent who prevents his child from learning to walk for fear that she might fall and get hurt.

So we’ve never tried to welcome people without taking a risk. But we’ve tried hard to protect the most vulnerable in our community. We talk to our kids about drugs and abuse and why friends act different when they’re high. We’re clear about the need to ask an adult before they open the door or leave the house with someone. We pay attention if a guest starts singling anyone out or avoiding interaction with someone in the community.

You know, people often ask us if it’s ever scary to live this way. The truth is, we feel very safe most days. But I’ve come to realize more and more how scary it can be for some of our guests to come here. After years of being abused, we ask them to trust us when we open the door. I think it’s important to recognize that the guests are also taking a risk—sometimes more than we are. Our life together isn’t possible without their willingness to risk too.

JM: You say sometimes you don’t want to answer the knock on the door. Why not? And what makes you turn that knob anyway?

JWH: The Benedictines have this little joke. They say, “Our Rule commands us to greet every guest as if the guest were Christ, but sometimes when Jesus shows up at your door you have to say, ‘O Christ, it’s you again!’” I laugh every time I tell it because I’m laughing at myself. No matter how much you pray, some people still get to you. Lord knows you need a sense of humor to keep going. There’s beauty in the truth, but the truth is often stranger (and messier) than fiction.

How do you keep looking for Jesus at the door? We’ve learned that prayer is important—not just quiet time with God prayer, but structured, fixed-hour prayer that roots us in the deeper truths we’re called to live. The other thing that’s essential is community. You can’t do this on your own. On the day when I can’t go to the door—when I can’t deal with one more person’s needs—there’s someone else to go for me. And when they’re tired, maybe I’ll be ready to go for them. Sometimes the person who answers the door for me is someone I greeted years ago. And they’re Jesus to me once again.

JM: November is National Homeless Awareness Month. What are some popular misconceptions about homeless people that crawl your case?

JWH: Something in our gut tells us that we ought to help the guy on the street holding a cardboard sign. I think we all feel that. But we also have a sense that homelessness is way more complicated that any of us can figure out from the driver’s seat of our car. So we tell ourselves stories about who those people are to relieve the tension. We say, “Well, maybe he has a bank account bigger than mine,” or, “If he wanted to work, he could.” Or we reason that professionals can help “those people” better than we can. So we make a donation to the local shelter.

More than anything else, living with people who’ve been homeless for ten years has taught me that they are people like me. Sure, they all have problems. They wouldn’t have become homeless if they didn’t. But there’s a big difference between having problems and being a problem. I think the biggest misconception about homeless people in America is that we assume they are the problem.

But the gift of knowing people across this division—the gift of learning what it means to be community together—is seeing how a hospitality house exposes the problems we all share and helps us imagine new ways of being. What we are doing is very small. By itself, it’s not going to end homelessness. But I tell these stories because I think they reveal who we might become as a people in America if we listen to our most vulnerable neighbors.

JM: I imagine that your Rutba House work–offering open hospitality–sounds exhausting. How do you keep from getting burned out?

JWH: I go to bed every night. Whatever illusions we had of fixing people are gone now. For the most part, no one is going to be doing any better a month from now if I stay up all night to deal with the crisis of the day. But if I try to fix every crisis, I’ll be in the hospital myself a month from now. So I go to bed at night. I turn off my cell phone and go to sleep.

I’ve learned this from my neighbors more than anywhere else. You know, it’s mostly white people who talk about burn out. I’m not saying the experience isn’t real. But it’s a problem that stems from a set of cultural assumptions, I think.

We hadn’t been living here too long before I started to look around and think, “Everyone here knows someone who’s homeless, someone who’s coming home from prison. But no one talks about burn-out.” Of course, some people have just hardened their hearts. They don’t care anymore. They keep going by shutting their doors and locking them. But my neighbors have taught me that white people burn out because we think too highly of ourselves. It’s good to know your limits. It’s good to laugh at yourself. It’s good to be able to sit down on a front porch and just tell stories. If we can’t enjoy life, what hope do we offer anyone else?