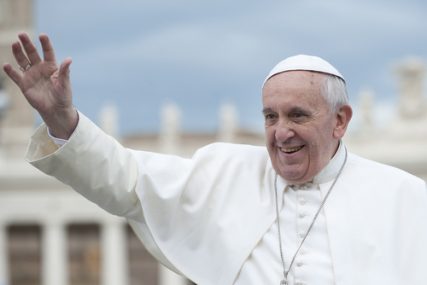 “I have Pope Envy,” I confessed to a Catholic friend recently over breakfast.

She understood at once. The way Pope Francis has re-energized the Roman Catholic Church in just eight months is nothing short of astonishing, filling pews with lapsed Catholics and generating good will everywhere he goes. As the Archbishop of New York put it,

“If I had a dollar for every New Yorker, Catholic and not, who has told me how much he or she loves our current Holy Father, I’d pay off the big repair bill of St Patrick’s Cathedral!”

As a Mormon, I’ve delighted in seeing this beautiful revitalization of hope in the Catholic Church, but I’ve also felt twinges of (an admittedly un-Christian) envy.

What is so attractive about Pope Francis? This summer, a survey of global Catholics found a 96% approval rating for the pope, the highest since John Paul II. An Italian survey hinted at the characteristics Catholics most prize in their new leader. According to the National Catholic Reporter, the most popular values were these five:

Looking at this list as a Mormon, I think I can disqualify the last one as being largely irrelevant to us; heck, my people practically wrote the book on sobriety. But how inspiring are our current leaders in the other four categories?

So in the spirit of a number of pieces in recent weeks on what various groups could learn from the pope’s example (such as this one on what the Republican Party might learn from Pope Francis), I’ve been thinking about Mormon leadership in the light of the Francis Lovefest.

Even among LDS prophets, President Monson is unusual in his distance from the public, the media, and his own followers. His unexpected appearance at a temple groundbreaking in Connecticut in August was remarked upon for its very rarity. In a Google search of his appearances I found this charming brief video of him attending a Utah Jazz basketball game, and a few videos produced by the Church, and of course many Conference talks from his half century as an Apostle.

But there were no interviews from non-LDS reporters. Almost nothing was unscripted. He does not do press conferences, and seldom fields unexpected questions. This is in stark comparison to the open, easy relationship that President Monson’s predecessor, Gordon B. Hinckley, had with the media, granting national interviews with Larry King, 60 Minutes, Time, Newsweek, PBS, CBS, and other news outlets.

[tweetable]I’d like to see the current Mormon prophet unplugged.[/tweetable] He is by all accounts a marvelous person. Why not let the world see him loosen up?

One of the new pope’s signature elements has been his decided emphasis on voluntary simplicity. He has eschewed the luxury of the Vatican’s papal residence in favor of unpretentious guest quarters. He has refused to have a household staff, tending to his own personal needs.

The guy sometimes rides the bus to work, for heaven’s sake, and his personal car is a used Renault with 190,000 miles on it.

Mormon leaders have also traditionally emphasized the importance of frugality and simplicity. Reporters who cover the LDS Church have commented on how modest the homes of General Authorities tend to be compared to, say, the multimillion-dollar spreads of televangelists. I don’t doubt that President Monson lives these values of frugality in his personal life — especially since he, unlike many other GAs, did not have a lucrative career before being called into full-time church service.

That’s why it was particularly surprising and unpleasant when, last year, President Monson and his two counselors threw themselves so wholeheartedly in the opening of the City Creek Center in Salt Lake City. Funded by a for-profit division of the LDS Church, [tweetable]the luxury shopping mall has certainly done much to revitalize the downtown area and has created approximately 2,000 jobs.[/tweetable] While I can see a positive side of the development issue, I could have gone my whole life without seeing the man Mormons regard as a prophet of God saying, “One, two, three . . .  let’s go shopping!” before cutting a gigantic red ribbon to open an opulent consumerist hub.

My faith took a hit that day. My church had spent somewhere between $1.5 billion and $2 billion so that affluent people could have access to Tiffany’s and, ironically enough, an apparel store called “True Religion.”

To be sure, the Catholic Church has had more than its share of conspicuous sybaritism—a history of wealth and the consolidation of power. But in the spirit of the saint after whom he named his papacy, Francis is tightening the reins on such extravagance, not only in his personal example but also by reining in bureaucracy. I’d love to see my leaders get out in front by doing the same.

Closeness to the people

One of the ways that the Pope has energized his people—as well as many non-Catholics—is by simply being out among them on a regular basis.

One thing that strikes me about this list is how trans-Catholic it is, how global, how little-c catholic. [tweetable]The new pope has made a point of reaching out to people of other religions, and of no religion; he is for everyone.[/tweetable] He belongs to us all. 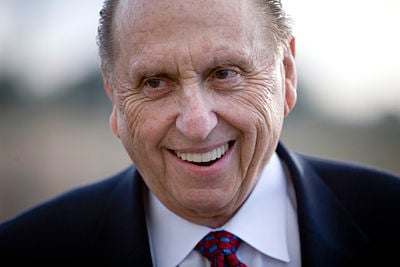 I contrast this to the LDS First Presidency and come up short. Of course, Mormonism is a fraction of the size of Catholicism, and we do not enjoy anything approaching its longevity or brand recognition. So on the one hand, it’s not surprising that non-Mormons have never heard the names of Thomas Monson, Henry Eyring, or Dieter Uchtdorf. On the other hand, the LDS approach is oddly limited, appearing to pursue leadership of the Mormons, by the Mormons, and for the Mormons.

Consider, for example, the travel schedule of President Monson. He’s been traveling, on average, about half a dozen times a year, including short regional trips to places like Idaho and southern Utah, but also including major international trips to Ukraine, Italy, Brazil, and Germany.

That’s nothing to sneeze at. But if you look at those trips more closely, it’s clear that the vast majority of them were undertaken to dedicate temples, speak at LDS missionary and youth conferences, or appear at Mormon Tabernacle Choir concerts. Other than meeting privately with President Obama and receiving honorary degrees from two Mormon-dominated Utah universities, all of the listed events on President Monson’s schedule of activities are intra-Mormon.

A question, a vision: What would it mean for an LDS President to also be a leader outside of our narrow community?

Attention to the weakest

President Monson has made it a point in his Conference talks to always remember the poor and the weak. It’s one of the things I love most about him. In fact, he is the prophet who added “Care for the Poor” as the fourth mission of the Church in 2009. His life of Church service has been marked by a commitment to individual service; when he was a young bishop—called at age 22—he had 84 widows in his ward. He didn’t just care for them while he was their bishop. He looked out for their needs during the rest of their lives and spoke at all 84 of the women’s funerals.

We don’t see much of that personal guardianship now, either because of President Monson’s own advanced age (he is now 86) or a desire on his part to keep such deeds quiet and not call attention to his goodness.

Such modesty is admirable. However, there is something deeply inspiring about witnessing such acts of love and service—seeing a global leader willingly surrender the trappings of power to care for the least of these.

Some of the most moving shots of Pope Francis in the past few weeks have shown him blessing disabled people, including a man with a severely disfigured face Wednesday in St. Peter’s Square. Francis kissed and embraced the man, who told reporters later he “felt only love” from the encounter.

I don’t see this act as something manufactured for the cameras. Francis was out among the people in the square, with crowds who had sought his presence for a blessing. [tweetable]The pope intentionally put himself in a situation where desperate people would be.[/tweetable] Seeing a photo of Francis embracing a man that society had thrown away immediately made me want to be a better person: What can I be doing that I’m not doing to help the needy?

And I’d like to have those same feelings about the leaders of my own religious tradition. They—and we—are called beyond the confines of a single institution, and to go forth into the world and care—visibly, if necessary—for everyone in it.