Peter O’Toole, one of the last century’s greatest actors whose roles in films such as “Lawrence of Arabia” and “The Lion in Winter” earned him eight Oscar nominations but no wins (a record), died Saturday (Dec. 14) at the age of 81. 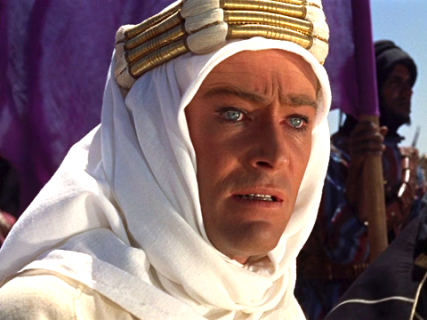 O’Toole grew up in Leeds, England, the son of an English nurse and an Irish bookie. He was evacuated from Leeds during World War II and sent off to Catholic school, where the nuns forced him to become right-handed.

O’Toole recalled one time in his childhood when his father, Patrick, “stood his young son up on the mantelpiece and said: ‘Jump, boy. I’ll catch you. Trust me.'” O’Toole jumped and fell onto the floor with a thud. “The lesson, said his father, was ‘never trust any bastard.'” It’s hard to imagine that lesson not bearing itself out in O’Toole’s worldview.

In a 2007 interview with The New York Times, O’Toole described himself as a “retired Christian.” He played, among others, the pope (twice–onstage early in his career and in “The Tudors”), a Catholic priest (“Fore Greater Glory“), and a British lord who thought he was Jesus (“The Ruling Class”).

O’Toole left his Catholic faith behind in his childhood, but often had high praise for the figure behind Christianity. Speaking of his admiration of the Sermon on the Mount, O’Toole said, “No one can take Jesus away from me…there’s no doubt there was a historical figure of tremendous importance, with enormous notions. Such as peace.”  He didn’t have much use for the institution of the Catholic church, but he held Jesus in reverence.

In 2003, O’Toole was given lifetime achievement Oscar. He began his long-awaited acceptance speech by saying, “Always a bridesmaid, never a bride — my foot. I have my very own Oscar now to be with me till death us do part.” His influence will be felt on the stage and screen for the foreseeable future, and his resonant questions about the utility of organized religion are only gaining momentum in the public conversation about faith.