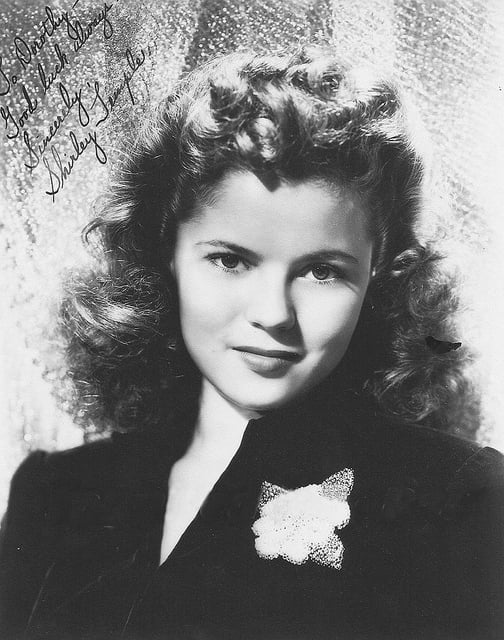 There is a scene in the 1939 film The Little Princess where Shirley Temple, a young girl whose mother has died and whose father is off at war, hears that the Second Boer War has come to an end. "Mafeking is relieved! Mafeking is relieved!" she yells, sure that it is only a matter of days before her father returns to her. It is one of my mother's favorite scenes in a movie, and every time we watch it she says the words along with Shirley, words of a young girl's hope that hope is not dead, that there is still a light: Mafeking is relieved!

Shirley Temple Black (raised in both the Presbyterian and Episcopal Churches) died yesterday at her home in Woodside, California. It had been quite a while since she was in the spotlight -- she retired from acting in 1950, after a spate of B-movies left her with the distinct impression that America liked her best when she was a girl. But for several years in the 1930s, Temple was among the highest-paid, most in-demand movie stars of her time.

No less than President Franklin Delano Roosevelt said, "As long as our country has Shirley Temple, we will be all right. When the spirit of the people is lower than at any other time during this Depression, it is a splendid thing that for just 15 cents, an American can go to a movie and look at the smiling face of a baby and forget his troubles."

Not everyone saw Temple as a baby, though. In 1938, Congress made inquiries into whether the then 10 year-old was a Communist. (She was not.) The year before, Graham Greene (yes, that Graham Greene) threw some British shade at Temple. He wrote that she was "a complete totsy," and that "Her admirers—middle-aged men and clergymen—respond to her dubious coquetry, to the sight of her well-shaped and desirable little body, packed with enormous vitality, only because the safety curtain of story and dialogue drops between their intelligence and their desire." (See Anne Edwards' Shirley Temple: American Princess for more.) Temple was nine years old at the time.

Around the same time as her retirement, Temple divorced her first husband, John Agar, whom she had married when she was 17 years old. She remarried the month after the divorce was finalized, and was married to Charles Aiden Black, a Navy intelligence officer, for fifity-four years, until his death in 2005. Black died of bone marrow cancer in the same Woodside home Shirley Temple Black was in when she died yesterday.

One of the most important lessons from the life of Shirley Temple Black is the lesson of celebrity well-used and well-left. It is the rare movie star (or musician, or athlete) nowadays who says they are going to retire and actually does it. The pull of the spotlight is too enticing, too present for most to actually withdraw into the smallness of their own lives. But that's exactly what Black did. For a time, at least, she worked a bit in television, cared for her family, and developed a social life with a close circle of friends. As time went on, she became more and more politically active, even serving for a time as US Ambassador to Ghana under Gerald Ford and Czechoslovakia under George H.W. Bush. She was president of the Multiple Sclerosis Society as well; her brother suffered from the illness. It's not a stretch to think of Angelina Jolie who, although still very active in film, has also resisted the kind of wild life that is a paparazzo's dream in favor of doing humanitarian work.

Shirley Temple Black was that rare kind of celebrity whose work remains as dazzling now as it was 75 years ago -- but that has a lot to do with the fact that, in the public eye, she never really grew up. Most of the photographs you see in her obituaries will be of this 85 year-old woman when she was six or seven or eight years old. And we can remember her then, as she brought levity and goodness to America in a dark time. But we should also remember her now, as a woman whose love of the world didn't stop her from leading a private life, and a woman whose childhood wasn't necessarily her best act. And now, Shirley Temple, you are relieved. Rest in peace.

Related Posts
By Emily McFarlan Miller
Christian apologist Ravi Zacharias dies of cancer at 74
By Alejandra Molina
Four young people of different faiths move into a home together, then a pandemic happens
By Adelle M. Banks
Little Richard: Six examples of how religion played a role in his life
By Jeffrey Salkin
Warning: Your piety might be dangerous to your health
By Adelle M. Banks
Joseph Lowery, minister, civil rights leader, friend of King, dies at 98