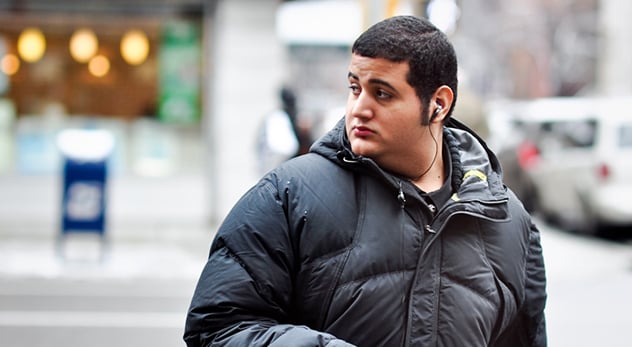 Tens of millions of people stream music on iTunes Radio, but overusing these services can be spiritually damaging. – Image courtesy of DalioPhoto (http://bit.ly/1gATF6T)

Apple’s answer to Pandora hasn’t produced a spike in music sales like some predicted. According to a new report by Music Forecasting, iTunes Radio listeners use the service for a “lean back” listening experience and don’t want anything—even purchasing a song—to interrupt it.

Having recently relocated to New York City—the earbud capital of the world—I’ve learned to “lean back” with regularity. Walking to the coffee shop where I write. To and from the subway. Even standing in my kitchen making a sandwich. Apple’s curated tunes have become a ubiquitous presence in my life, helping me block out the world by flooding my head with something more melodic and presumably more gratifying than noises I might otherwise encounter.

That’s why I’ve come to believe that iTunes Radio is actually bad for our souls.

Dutch sonographer Floris Van Manen argues that noise is a drug that modern society is feverishly addicted to. It stimulates, distracts, whisks us away to another place and time. From commercials to street sounds to 24-hour news channels blaring in every airport and doctor’s office waiting room, we’re almost never without it. When we open the app, select a genre, and push play, we’re able to take the reins and dictate the sounds we’re subjected to.

One overlooked spiritual consequence of our noise addiction is a failure to hear spontaneous sounds. By tightly controlling and curating what we hear, we may block out everything else and muffle the God-messages sewn throughout the fabric of the world.

As I shuffle through the city bobbing my head to the latest hits, I rarely notice the sounds of chirping birds or cooing pigeons as I pass a park. But I’m also avoiding the feathery reminders that I serve a detail-oriented God. If God notices when a single fowl falls, how much more does that God watch over me?

The autumn leaves fall and rustle as the wind whips, but I’m unaware of their presence. I’ve got Local Natives blaring in my head, stiff-arming a spiritual lesson about divine rhythms: God uses death to bring life. When I’m forced to release a self-centered aspiration or unhealthy habit, it hurts. Maybe the pain would be mitigated by receiving the spontaneous sounds swirling around me.

This works in the opposite direction as well, chasing away the undesirable sounds. Thanks to Apple’s Top 50 playlist, I don’t have to hear the cries of that woman at the table next to me who needs someone to stop and listen. I’m not subjected to the barrage of homeless people asking for money or food. If I don’t hear their pleas, I don’t feel guilty for not helping. Goodbye, inconvenience. With the push of a button, I’m able to live a day free from conviction and obligation.

But perhaps the most significant spiritual side effect of our noise addiction is the growing fear of silence. According to a recent study of nearly 600 young people conducted over six years, the constant exposure to “intentional sound” has created “a mass of people who fear silence.”

No one needs to tell us this is true. We feel it in our fingers, as they tap a desk frantically. Or our vocal cords, humming to fill the air with something of our own making. When silence floods a room, it brings with it an eerie discomfort. So we drive it away by self-medicating with noise.

In my forthcoming book, “Jesus is Better Than You Imagined,” I decided to explore the value of spiritual silence. So I trekked to a Benedictine monastery in the New Mexican desert and took a 60-hour vow of silence. Reflecting on the event, I wrote these words,

Inhabitants of the modern world often fear silence and solitude. Having bathed in chaos, these spaces become a kind of wilderness or uncharted frontier.  We run from soundlessness because it makes us most uncomfortable….[But] for the Christian, silence is more than an effort to retreat from noise. It is an opportunity to lean into God. To sense His presence in life, to notice the contours of His intervention, to express our reliance on Him.

Jesus knew importance of intentional quiet when discerning God’s voice, and we have a record of Him seeking it out more than half a dozen times. Isaiah prophesied, “In repentance and rest you shall be saved, in quietness and trust.” After Paul was converted, he went to Arabia for a quiet retreat of his own. Christian history reveals that generations of Jesus-followers have practiced silence often.

How many of us take time regularly to flee the noisiness of life? To embrace the discomfort of silence? To listen for the voice of the Holy?

Thomas Merton once remarked, “Just remaining quietly in the presence of God, listening to Him, being attentive to Him, requires a lot of courage and know-how.” It’s a strange thought that silence requires courage; that we’d have to muster guts to enter the absence of noise; that offering a temporary “no” to the clatters and clamors of life requires the same emotion needed to jump out of a plane.

Listening to music can also be spiritually uplifting, so I won’t be throwing my earbuds away anytime soon. I won’t be deleting my iTunes account. And I don’t want to institute another rule Christians have to live by. (Lord knows we have created enough of those already.) But I think Merton is right. I think Jesus and Isaiah and Paul were onto something. Learning to embrace silence or even the spontaneous sounds of life is as difficult as rowing upstream. But it is worth it, and we should try it more often.