(RNS) I played an angel on “Touched by an Angel” for almost a decade, and I’ve learned a thing or two about spiritual warfare:

Tired of cursing the darkness, my husband Mark and I wanted to shine a light. To do this, we set up a production company called LightWorkers Media. “The Bible” miniseries, born out of this intention and released last year, grew so popular that we were able to make it into our Jesus film, “Son of God.” Satan in the miniseries “The Bible.” Photo courtesy of the History Channel

“The Bible” series was in its third week when Jesus began to appear on the big screen. There was great excitement that Jesus was coming, with our trailers, various talk shows and even Twitter buzzing with anticipation.

He was beautiful and strong and kind and compassionate. His presence uplifted and encouraged people. It was everything we had hoped for.

But there was supernatural opposition at work. The devil was also in that episode. Someone made a comment that the actor who played the devil vaguely resembled our president, and suddenly the media went nuts. It went global, showing up all over TV and the Internet. That next day, when I was sure everyone would only be talking about Jesus, they were talking about Satan instead.

This is a battle of light and darkness.

It became ugly when people started making nasty statements. Something that had been born of a beautiful intention was suddenly under attack, and we were caught in the middle of spiritual warfare.

I knew it was just like Satan the narcissist to make it all about him and create division. I am sure he loved being the center of attention for even one day.

But for our movie, “Son of God,” I wanted all of the focus to be on Jesus. I want his name to be on the lips of everyone who sees this movie, so we cast Satan out. It gives me great pleasure to tell you that the devil is on the cutting room floor. This is now a movie about Jesus, the Son of God, and the devil gets no more screen time, no more distractions.

You may think of me as a gentle Irish angel, but nobody, not even the devil, should mess with me. Get behind me Satan. This is a love story, and nothing anyone can do will stop that message from reaching millions of people. The darkness is no match for the light, something we are assured of in the book of John where it says: “And the light shineth in the darkness; and the darkness comprehended it not.” 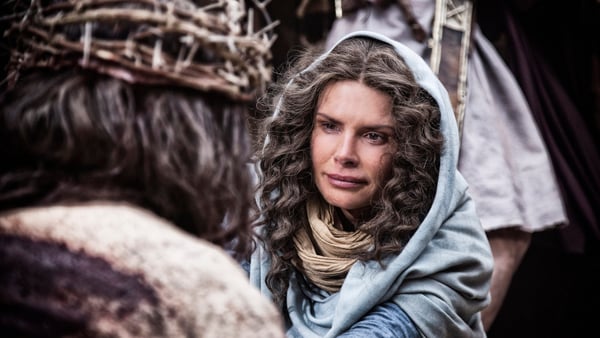 In Morocco, on the set of the movie, we had a snake man, to clear our locations of snakes and scorpions. Each day he would clear one or two snakes. But on the morning of the crucifixion scene we had asked everyone we knew to pray. That morning when I got to the set, the snake man had a writhing cloth bag at the side of the road with over 40 snakes in it. He had cleared them from around the foot of the cross. The symbolism of the snake was not lost on us. Prayer — and the snake man — had cleared the way.

We have so many people praying for the movie and we are grateful for all the prayers for us, our team and our movie. We pray that all the “snakes” that may be thrown in our path will be cleared between now, and Feb. 28, so that the movie will have a successful opening, and will bring glory to God.

(Roma Downey plays Mary, the mother of Christ, and is the producer of the film, “Son Of God.”)