The Philadelphia skyline will soon have some fresh development, thanks to an infusion of investment capital from The Church of Jesus Christ of Latter-day Saints.
February 24, 2014
Jana Riess 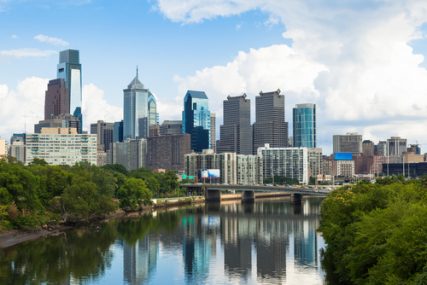 The Philadelphia skyline will soon have some fresh development, thanks to an infusion of investment capital from The Church of Jesus Christ of Latter-day Saints.

This month the city of Philadelphia announced a unique partnership with the Church of Jesus Christ of Latter-day Saints to develop a two-block "Mormon complex" just north of the downtown area.

In addition to the temple that is already under construction there and scheduled for completion in 2016, the complex will feature:

The plan has earned a mixed review from the Philadelphia Inquirer's architecture critic, Inga Saffron. She generally hates the hodgepodge look of it:

It's hard not to wince when you first look at the renderings of the Mormon Church's expanding kingdom at 16th and Vine Streets, unveiled last week by Mayor Nutter. The architectural chameleons at Robert Stern's office have paired a 1920s-style apartment tower with a teensy redbrick meetinghouse that looks as if it was dragged across town from colonial-era Society Hill.

As if that wasn't enough, those retro buildings will join a snow-white, double-spired, French classical Mormon temple by Perkins+Will that is already rising along the cliff edge of the Vine Street Expressway. The collection of architectural pastiches promises to be one of the weirder ensembles produced in 21st-century America outside of Las Vegas.

That's the bad news. But on the other hand, Saffron gives the Mormon developers kudos for burying the parking, redeeming an unenviable location just off an interstate cloverleaf, and using real bricks in both the meetinghouse and the apartment tower.
"How do you respond to a development where the architecture is awful, but the urbanism is terrific -- especially in a city routinely shortchanged in both categories?" she asks.
Good question. This project marks the LDS Church's second massive urban reclamation project, but the first outside its own immediate neighborhood. The City Creek Center development in Salt Lake City, which the Church funded to the tune of $1.5 to $2 billion, featured luxury apartments and shopping within a stone's throw of the iconic Salt Lake temple.
It has been a great commercial success, despite criticism that the Church's wealth would be better spent on helping the poor than encouraging conspicuous consumption. The development has created jobs and brought foot traffic back to a key area of downtown Salt Lake.
It will be interesting to see what happens with the Philly experiment, which the New York Times suggests will have a lower price tag in the "many tens of millions" of dollars.