“America has always been a nation of fearless explorers,” said President Barack Obama as he introduced the premiere of Fox-TV’s reboot of “Cosmos” last week. “That’s the spirit of discovery that Carl Sagan captured in the original ‘Cosmos.'”

Obama is not the only person reflecting on Sagan’s legacy. One of those most impacted by the famed astronomer and original “Cosmos” host is his son Nick, a prolific filmmaker and writer whose credits include episodes of “Star Trek” and the book You Call This the Future?, which Publisher’s Weekly called a “delightful ‘expedition in search of the future’, providing clear explanations of today’s cutting edge technologies.”

I spoke with Nick Sagan about his father’s impact, memories from his “strange” and “surreal” childhood, the new “Cosmos,” and what it was like to record a greeting for potential extraterrestrials at six years old. Our conversation appears below. 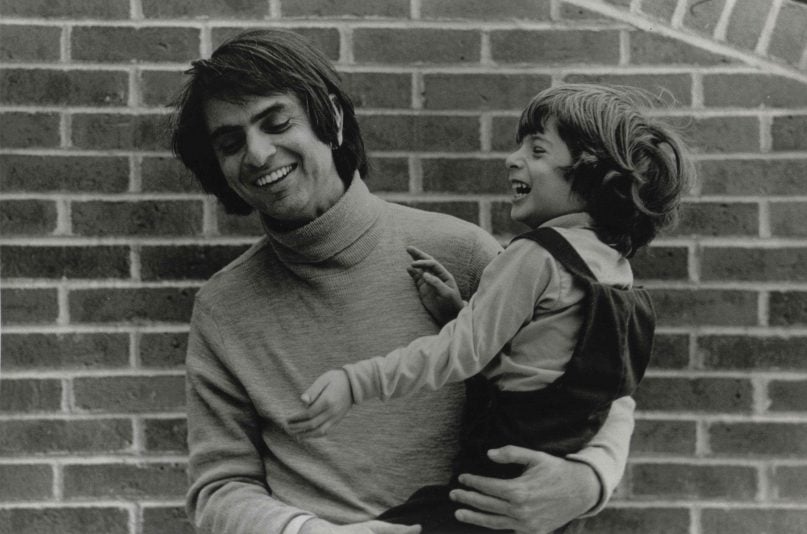 Chris Stedman: You published a post featuring memories of your father in 2006. How would you describe his impact on you?

Nick Sagan: Even if I weren’t his son, he’d be one of my heroes. I look at what he achieved in the short time he was here and try to imagine how he accomplished it all. I was there for 26 years of it and I still don’t understand. His intellectual curiosity was boundless. His work ethic was phenomenal. It’s tremendously inspiring and humbling.

CS: Do you have any stories about your father that you consider especially representative of who he was?

NS: Yeah, plenty—but I want to tell you this one. I’m a kid and I desperately want to see Pink Floyd — The Wall. Dad thinks an R-rated movie is inappropriate for an 11-year-old. He has a valid point but whatever—I consider myself very mature for my age. We argue and then it’s my bedtime, and I fall asleep thinking he’s being so unfair.

Hours later, he wakes me up. There’s a special on the making of The Wall playing on TV. He knew I’d want to see it, so he’s waking me up, despite how I acted earlier. Bleary-eyed and moved by his kindness, I watch it. It’s great. By the end, I’m fascinated by movie making. Years later I’m in film school, realizing the role that special played in starting me on my path.

CS: When you were six years old, a recorded message from you (“Hello from the children of planet Earth”) was placed aboard the Voyager for potential extraterrestrials. What was this experience like? What do you think of it today?

NS: I had a strange childhood. Looking back, much of it feels deeply surreal. It seemed perfectly ordinary at the time for my parents to plop me down in front of a microphone and ask what I’d want to say to extraterrestrials, should any happen to exist. It’s fair to say I didn’t fully appreciate the significance of what we were doing. 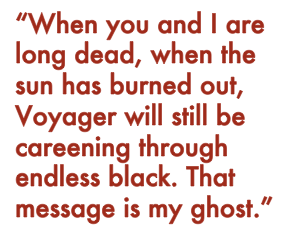 Now I’m honored—and consider myself fantastically lucky—to have contributed a greeting to the Voyager Golden Record. I wonder sometimes what aliens would make of it. Far more likely, I think, is the scenario where nothing intercepts Voyager because, even if we’re not alone, the distances between stars are simply too vast. Which makes it a poignant experience, wistful and existential.

That’s a moment from my childhood, and it’s flying away on two of the farthest spaceships we’ve ever sent, never to return. When you and I are long dead, when the sun has burned out, Voyager will still be careening through endless black. That message is my ghost.

CS: You collaborated with the SETI Institute on a TV special that explored what might happen if we made contact with an alien civilization. How did your father influence your interest in this subject?

NS: It’s hard for me to imagine growing up the son of Carl Sagan without some interest in outer space and whether or not we’re alone. Likewise, I’m the son of Linda Salzman Sagan, who drew the Pioneer plaque and recorded the greetings for the Voyager Golden Record. In a sense, the “Alien Encounters” special you’re talking about is just me following them into the family business.

What more can I tell you? Dad introduced me to fantastic science fiction novels and Barlowe’s Guide to Extraterrestrials. Also, the man behind the famous Drake Equation is my godfather, Frank Drake. Frank’s in “Alien Encounters” and he’s terrific. As is Neil deGrasse Tyson and so many others on camera and behind the scenes. I’m very pleased by how well it turned out.

CS: Many atheists, agnostics, and secular humanists have a particularly strong appreciation for Sagan. Why do you think that is? 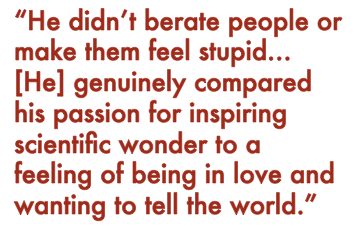 NS: I’ve met secular humanists who grew up in evangelical households, for whom Cosmos was their first exposure to a scientific way of viewing the world. Dad was a difference maker. He reached out to people. He took them by the awe and wonder we feel over the most important questions we can think to imagine. He pulled them away from blind faith, away from pseudoscience, toward a deeper, richer understanding of the universe.

And he did it with compassion. He didn’t berate people or make them feel stupid. Secular humanism can be demonized when it’s shrill, not when it’s poetic and inviting, and embodied by a man who genuinely compared his passion for inspiring scientific wonder to a feeling of being in love and wanting to tell the world.

CS: Sagan was an exceptional storyteller and science communicator, and he also wrote and spoke about the intersection of science and spirituality. What do you think about his views on spirituality? What are yours?

NS: Two of his quotes come to mind. First: “Science is not only compatible with spirituality; it is a profound source of spirituality.” And: “Our feeblest contemplations of the cosmos stir us—there is a tingling in the spine, a catch in the voice, a faint sensation, as if a distant memory, of falling from a height. We know we are approaching the greatest of mysteries.”

This speaks so deeply to me. I’m agnostic by nature but I’ve had many experiences I consider spiritual. I disagree with those who see spirituality as a dirty word or a synonym for pseudoscience. Spiritual is how we feel when focusing on the big questions of existence. Or making a positive difference in another person’s life. Or revering the natural beauty of the world. You don’t have to be religious to feel awe. All you have to do is look up at the stars.

CS: How do you see your father’s legacy?

NS: You can see his legacy in the profound difference he made in millions of lives all around the globe. As a scientist and science communicator, he expanded horizons, sparked critical thinking, created new scientists, and instilled a sense of passion for learning the true story of the astonishing universe we call home.

CS: How has he inspired the work you do today? 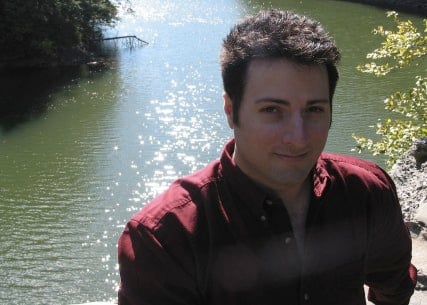 NS: Several of the projects I’ve worked on have been informed by his sense of cosmic wonder and his hopefulness—if not quite optimism—about our future. That would include most of my “Star Trek” episodes and the planetarium show I wrote for the Adler. Other projects are less influenced—my Idlewild novel, for example, has far more to do with my angst about the world.

Still, there’s never a project I undertake where I don’t think about how he’d react. Sometimes I feel like I have his voice in my ear. I don’t always listen because not every project has to be something he’d like. Happily, I know he’d be fine with that.

CS: What do you think of the Cosmos reboot?

NS: It’s a dream come true. Ann Druyan is brilliant. Many people deserve praise for how great the new Cosmos is, of course, but first and foremost is Ann—not only for her leadership and for the sheer poetry of her science writing, but for her years of hard work and perseverance in getting this reboot made. I’m very hopeful about a potential massive wave of mind-blown young people inspired to learn about science a la the original show. Dad would be thrilled.

CS: What are you currently working on?

NS: If you like the “Cosmos” reboot and happen to own a smartphone, I would encourage you to download the free “Cosmos” Android app. It’s a visually stunning companion piece to the show, with videos, articles, production diaries and even a Cosmic Calendar. I’ve been providing content for it, which is a pleasure and an honor.

I’m also working on something else but shouldn’t say too much about it, except that it’s sci-fi/horror and therefore very different in tone from the uplifting wonder of Cosmos.