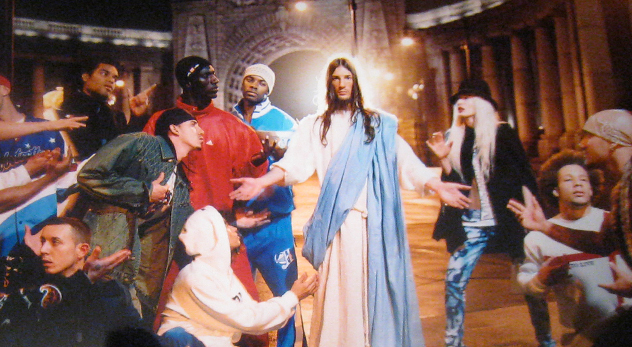 Most people know Jesus was called “a friend of sinners,” but what does that mean exactly? – Image courtesy of Christophe Ducamp (http://bit.ly/1gJbfWp)

Many people know that the New Testament refers to Jesus as a “friend of sinners,” but what does that mean exactly? Apparently not what some Christians think it does.

In response to a twitter comment I made about Christian singer Natalie Grant walking out of The Grammys, Joe Carter, prominent Calvinist and director of communications for the Ethics and Religious Liberty Commission rhetorically asked, “Didn’t [Jesus] only welcome those seeking forgiveness?” He went on to agree with another that “The sinners Jesus partied with were already followers.”

Theological sirens blared inside my head as Carter doubled down on his assertion that Jesus wasn’t really a friend of sinners, but I assumed it was probably a fringe view I wouldn’t likely encounter again.

A few days later, however, a friend emailed me a blog post from The Gospel Coalition titled, “Jesus, Friend of Sinners: But How?”, written by another Calvinist, Kevin DeYoung. He said that Christians needed to be “safeguarded against doctrinal and ethical error” regarding Jesus’ social habits.

The sirens returned. Was there really a conditionality in Jesus’ relationships? Carter’s and DeYoung’s assertions didn’t square with what I know about Jesus from the New Testament. Christ preached the Kingdom everywhere he went, but he also indiscriminately and unconditionally forged relationships with those at the margins of society, offering them a seat at the table. This scandalous social practice earned Jesus that nasty nickname to begin with.

But I’m a columnist and not a Bible scholar, so I decided to investigate in case I was wrong. After all, hell hath no fury like a Calvinist scorned.

I first contacted Gary Burge, professor of New Testament at Wheaton College and author of such books as “The New Testament in Antiquity.” I asked him about the notions espoused by Carter and others that the “sinners” with whom Jesus fellowshipped were actually followers. Burge replied, “I’m surprised that someone would actually say that.”

He cited several texts such as Matthew 9:10-11 and 9:13 where Jesus extends fellowship to individuals and the text says “nothing about their interest in the gospel or their repentance or their willingness to put faith in him.”

Of DeYoung’s ideas, Burge says, “I think that Jesus’ reputation was just the opposite. The complaint against him was that he spent time with people without pre-conditions.”

Next, I spoke with Darrell Bock, senior research professor of New Testament studies at Dallas Theological Seminary and author of “Studying the Historical Jesus” and “Truth Matters.” When I asked him if Jesus only welcomed those seeking forgiveness, Bock said, “I don’t think that’s true at all.”

Bock referenced the New Testament stories of the woman caught in adultery and the woman at the well, two individuals who didn’t approach Jesus and brought nothing to the table. “Jesus is encouraging people who are taking positive steps, but he associates with all people with no strings attached,” Bock said.

Joel Green, professor of New Testament interpretation at Fuller Theological Seminary and author of “The World of the New Testament,” echoed Bock and Burge’s perspectives. He mentioned multiple passages in the Gospel of Luke—including chapters 7, 11, and 14—where Jesus has fellowship with those who don’t respond well or the story is left open. He described Jesus’ associations and meal-sharing practices as “fairly non-discriminate.”

[Editor’s note: the previous paragraph has been revised to clarify that Joel Green was responding to the general argument, not to anything specific that Joe Carter said.]

Responding to DeYoung’s statements, he said, “I get the point that Kevin DeYoung is trying to make, but I think it would be problematic to think that Jesus has already predetermined what kind of ‘sinner’ he is going to hang out with in order to determine who will and won’t hear the good news. This makes it sound like Jesus will only hang out with those who will respond positively to him. This is not true.”

But does it matter that we correctly understand Jesus’ social habits?

It does actually. Because Christians believe they must “live as Jesus did.” If the faithful only build relational bridges with those who are open to converting, they will find it increasingly difficult to exist in a pluralistic, post-Christian culture.

Perhaps Carter’s ideas work well in his hometown of Ashburn, Virginia. Maybe DeYoung easily lives out the implications of his thinking in East Lansing, Michigan. But try living out the belief that you should offer fellowship only to those who “are open to the gospel” in New York City where only a tiny sliver of the population is Christian. Come to my neighborhood in Brooklyn where you’ll see far more menorahs at Hanukkah than trees at Christmas and see how well that works. You’d never leave home.

Additionally, this type of thinking can degrade the very essence of relationship by forcing us to see people more as projects than friends. As Christine Pohl, professor of church in society at Asbury Theological Seminary and co-author of “Friendship at the Margins” told me, “Befriending someone so that you can evangelize them is manipulative and undermining of trust.”

Pohl added that Christians who desire the best for their friends will share the Christian gospel with them, “[but] we undermine the practice of friendship whenever we use it instrumentally. When the bonds we form in friendship are mostly a means to another end, we dishonor both the person and the relationship.”

As some Christian leaders attempt to reimagine Jesus’ social habits, it’s time we set the record straight on the friend of sinners. There’s too much at stake.

A Jesus who loves us even if we don’t love back? A Savior who pursues us even as we run away? A Christ who offers fellowship to all indiscriminately without condition, no strings attached? That would be a Jesus who is better than we’ve imagined, and that would be good news.

@brandongradelle @bobbixby @JonathanMerritt They were called sinners by the enemies of Jesus. Christ called them disciples and followers.