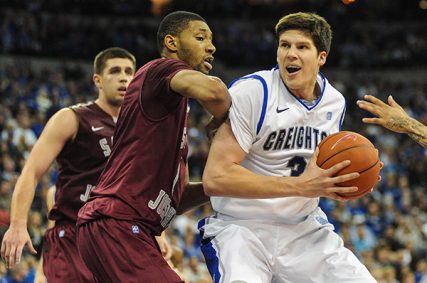 Doug McDermott, playing for Creighton University in 2014. Photo courtesy of Association of Jesuit Colleges and Universities

(RNS) Clerical types might know Villanova or Dayton for their theology programs.

Ask Pope Francis about Gonzaga or Creighton, and he’d probably recognize them as schools founded by his spiritual order, the Society of Jesus, better known as the Jesuits.

But for many, at least in March, these schools don’t inspire thoughts of systematic theology and Sunday morning Mass.

At many Catholic institutions, Lent, with its tradition of self-discipline, is just one springtime ritual in the long march toward a very special day in April.

Sixty-eight teams make it into the NCAA Division I men’s championship — affectionately known as March Madness — each year. In this year’s tournament, nine of those schools are Catholic.

That number isn’t unusual. In the 2012 tournament, Catholic universities constituted one-fifth of the field. One in six teams in the 2008 tournament was Catholic.

Jesuit schools, in particular, are well-represented. Seven made the tournament in 2007. A full eighth of the field was Jesuit in 2012. Five competed this year — and that’s not including perennial powers Georgetown and Marquette, which both missed the tournament after mediocre seasons.

The nation’s top scorer this season, Doug McDermott, plays for Creighton. Tiny Gonzaga was ranked No. 1 in the country for much of last March.

These Jesuit numbers are especially striking considering that college basketball is dominated by large state universities. Of the 351 schools that play Division I basketball, only 20 are Jesuit, none of which has more than 10,000 undergraduates.

Why are so many Catholic schools in the top ranks of NCAA men’s basketball? There’s no special Catholic basketball gene, of course. Players on these teams don’t need to be Catholic. Theology classes may teach players about sin, but that won’t keep them out of foul trouble.

Strange as it may sound, the composition of March Madness brackets may have a lot to do with the Irish potato famine, American nativism and 20th-century Italian demographics. 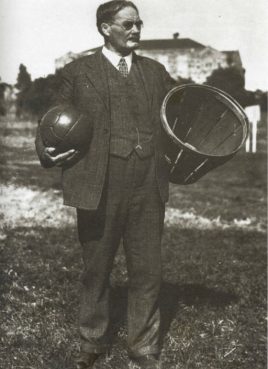 James Naismith with a basketball and a basket.

In that same decade, according to census data, the number of Irish-born Americans was at its peak. Many had been driven across the Atlantic by famines. In the early 20th century, as basketball spread across the country, those Irish immigrants, many of them Catholic, were joined by an influx of Italians and Poles.

These immigrants gravitated toward the country’s urban centers. There, they encountered a culture, as well as a school system, that was often hostile to Catholics.

“You have urban immigrant populations that are largely Catholic, that are founding Catholic schools and creating this sheltered parallel universe of Catholicism,” said Julie Byrne, a professor of religion at Hofstra University who has written about the history of basketball in Catholic schools.

For low-income urban communities, basketball has two distinct advantages. It requires less space than football or baseball. And, because it involves almost no special equipment, it’s cheaper than other sports.

As a result, schools could devote more resources to their basketball programs. Even today, only two Catholic universities compete in the top echelon of college football, and many don’t have football teams at all.

“A lot of that (basketball success) has to do with CYO teams, back in the day, which were open to students from poorer neighborhoods who tended to go to Catholic schools,” said Deanna Howes of the Association of Jesuit Colleges and Universities.

Altogether, Catholic immigrants came to the right places at the right times to develop a strong basketball tradition.

“If Jewish people had been the most populous immigrant group in the cities at the same time, then it would have been Jewish basketball,” said Byrne.

One of those titles went to Loyola University Chicago, a Jesuit school that was, controversially, among the first integrated NCAA teams to regularly include more than three black players in its starting lineup.

Today, basketball offers national publicity to small colleges. Jesuit schools, said Howes, have recently been exploring ways to “use basketball as a means of reaching out to the broader public about the beauty and the value of a Jesuit higher education.”

To some, the hypercommercialized world of NCAA Division I athletics — dominated by television networks, multimillion-dollar budgets and minor scandals — might seem like a questionable place for religious institutions to compete.

But the Rev. Michael Steltenkamp, a Jesuit priest, argues that Catholicism and college basketball are fundamentally compatible. Steltenkamp, a professor at Wheeling Jesuit University and a self-described jock, gave a talk to the WJU men’s team this year, “trying to familiarize them with the Jesuit tradition of basketball.”

During his talk, Steltenkamp recited a prayer written by St. Ignatius of Loyola, founder of the Jesuit order. “Teach me,” the prayer concludes, “to fight and not to heed the wounds, to toil and not to seek for rest, to labor and not ask for any reward except for that of knowing that I do your will.”

Recalling his preseason speech, Steltenkamp adds a hard-court gloss to the 16th-century prayer: “Leave it all on the court.”