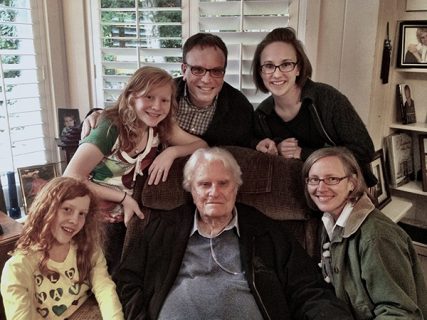 (RNS) The grandchildren of evangelist Billy Graham have long been influenced by their famous “Daddy Bill.” But the children of daughter Virginia “Gigi” Graham wondered what kind of influence he had on other people — those who attended his crusades or who watched him on TV.

The end result: “Thank you, Billy Graham,” a new book culled from the hundreds of comments that admirers have left on a website the grandchildren created. The responses came from 19 countries and a wide range of experiences, from ordinary people and family members who were influenced by the now-95-year-old Graham.

“Some of the most amazing stories that I have read in that book come from some of the most unlikely of individuals — people who encountered God when they weren’t even planning on it or expecting it or even, quite frankly, looking for it,” said Basyle “Boz” Tchividjian, executive director of GRACE (Godly Response to Abuse in the Christian Environment) and a Religion News Service blogger. “I think the more stories you read in this book, the less focused you become on Billy Graham and the more focused you become on the God of Billy Graham.” 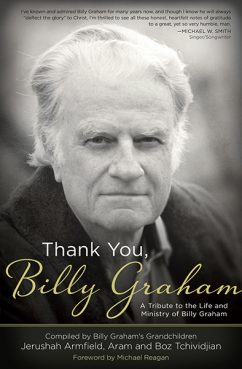 “Thank you, Billy Graham,” a new book culled from the hundreds of comments that admirers have left on a website that Graham’s grandchildren created. Photo courtesy of Barbour Publishing

Here are excerpts from the book:

I have been in the room when my grandfather has called and spoken to the president of the United States and then got up to pull the kitchen table chair out for the housekeeper, who was regularly invited to join them for dinner. This is just one small example of many. I have found that my grandparents are as sincerely interested and excited about having conversations with “everyday people,” such as taxi drivers, housekeepers, waitresses, etc., as they are with presidents, queens, and popes.

The Billy Graham crusade televised program was always special to Mama and Daddy. In the late 1950s, my family would gather in our den to watch the program on our small black-and-white television. This was considered church time. A time to worship. And my parents believed we should behave exactly as if we were attending the crusade in person. Mama said it would be sacrilegious to shell butter beans while Billy Graham told us what God had directed him to tell us. 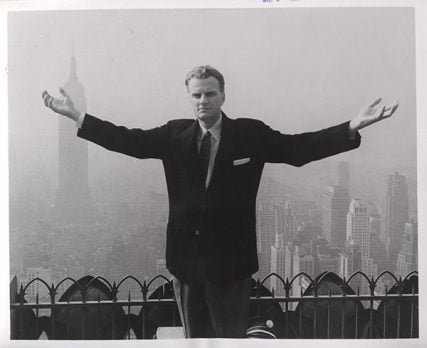 Evangelist Billy Graham stands on the rooftop of a skyscraper in New York City with the midtown skyline behind him to symbolize his New York crusade. Religion News Service file photo courtesy of Archives of the Billy Graham Center, Wheaton, Ill.

I believe it was in 1949 when I heard Mr. Graham speak at the Maranatha Bible Conference campgrounds. … That evening, he spoke in the tabernacle, but before the service he came back to where I was sitting and addressed the pastors sitting behind me. As a thirteen-year-old boy, I was interested to hear what he had to say. He made a request of those pastors that they pray for him, because he was tempted with pride. That showed me an insight into this man’s cautious walk with God. I went on to become a pastor myself, and I often remembered these words of concern. Incidentally, the first year he spoke in the tabernacle, it was not filled; but after the Los Angeles crusade, he spoke again and people were standing outside and sitting on cars. Thanks for a wonderful example of a man of God and for some most pleasant memories. 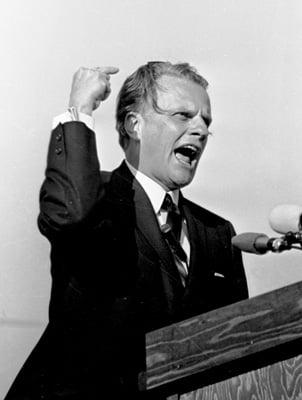 My mom told me this story one day. When I was a little girl, old enough to write, I did something very unusual — at least in my mom’s eyes. It was around Christmastime. All the other kids in the country were writing letters to Santa Claus — giving him their wish lists. But not me. I wrote a letter to Billy Graham.

Billy Graham was my hero when I first became a Christian and read one of his biographies as a young foreign university student in New Zealand in the mid 1970s. Ruth was the paradigm of the virtuous wife, the godly woman of Proverbs 31, the Esther in the book of Esther; and, to me, Billy and Ruth will always be the First Couple of America. There never will be another Billy and Ruth, but God has more heroes of faith for the gospel. God bless America once more and raise up more couples like Billy and Ruth.

His “Christ walk” made me want a Christ walk of my own. When I read how he went out of his way to protect the reputation of his ministry by making a rule that his male employees weren’t to interact with females alone, I thought it was extreme, but it showed how serious he was about his walk. Now, with so many church scandals, I always say, “They should have used Billy’s method.”

I’ve seen Billy Graham only once, at a crusade in Sioux Falls. He began his sermon by saying he had good news and bad news. The good news was that he had spoken with the weather service and the storm clouds behind him were at least an hour away. The bad news, he said, was that he had called the weather service an hour ago. He spoke for only a few minutes that day as the storm descended on us. I don’t remember how many people stayed in the rain. I only remember that I did. I had to. The voice compelled me. 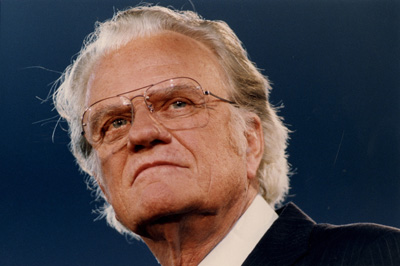 I asked Jesus into my heart while watching Billy with my mom. Well, the truth is, I really didn’t want to watch Billy Graham; I wanted to watch “Green Acres.” So, I pretended not to listen, but the Holy Spirit spoke to my heart, my mom answered my questions, and that night I knelt by my bed and prayed a simple salvation prayer. I was nine years old.

Some of my earliest memories growing up in the church were times I’d sneak upstairs to the sanctuary when no one else was around and pull up the pastor’s chair to the pulpit so I could stand and pretend I was the Rev. Billy Graham. I’m a preacher now and don’t need that chair to stand behind the pulpit.