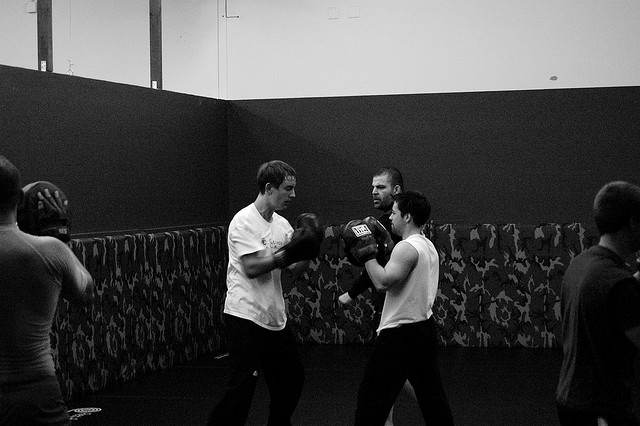 "Can you love your neighbor as yourself, and then at the same time, knee him in the face as hard as you can?"

Fighting language is nothing new in the Bible. "I have fought the good fight, I have finished the race, I have kept the faith," Paul wrote to Timothy. To the church at Corinth, he wrote that like an athlete, "I do not run aimlessly, nor do I box as though beating the air; but I punish my body and enslave it, so that after proclaiming to others I myself should not be disqualified." The Old Testament is full of battle imagery, and everywhere there is talk of the enemy. So it may not seem like too far a stretch for someone like Paul Burress to exist. Burress, the senior pastor of Victory Church in Rochester, NY and a Mixed Martial Arts (MMA) fighter, is one of several men featured in the documentary Fight Church (set to debut later this month at the Independent Film Festival Boston).

Directed by Oscar-winner Daniel Junge (Saving Face) and Bryan Storkel (Holy Rollers), Fight Church follows a handful of pastors and MMA fighters whose faith motivates them to bring the "good fight" metaphor to life. "Tough guys need Jesus, too," the saying goes. Fight Church comes at a moment of intense conversation around gender in the church. Just over two years ago, well-known pastor John Piper declared "God has given Christianity a masculine feel." There's an entire book devoted to Why Men Hate Going to Church. Mark Driscoll may be newly chastened, but he is still best known for having said he wouldn't worship a guy he could beat up. Of course, even this emphasis on masculinity within the church isn't terribly new -- In the Victorian era, muscular Christianity was a popular variation on this theme, and the 19th-century English preacher Charles Spurgeon remarked that “There has got abroad a notion, somehow, that if you become a Christian you must sink your manliness and turn milksop."

So, what's a church to do? "Mainstream Christianity has feminized men," a voiceover in the trailer tells us as we watch one pastor fire his gun into the woods with his young son at his side. "If we raise our boys to be men, these kind of problems go away." And those are the questions that Fight Church explores. The philosophy behind pastors like Burress is what's known as affinity evangelism -- the idea that Christians should use any means necessary, short of actually sinning themselves, to connect with other people based on their interests and then hit them with the gospel. This philosophy is responsible for all sorts of controversial decisions, like churches hosting gun giveaways. Get people through the door, goes the thinking, and God will do the rest. "At the end of the day, it's about reaching people with the gospel regardless of what you do to introduce them into relationship with Jesus Christ," says on of the film's cast members.

When it wades into violent territory, though, the merits of affinity evangelism are far outweighed by its harms. The theology behind Fight Church is mislead and misleading, although I don't doubt that Burress and his crew really believe that what they're doing is right. For one thing, as far as we know, Jesus never hit anyone. He drove people out of the temple for defiling it, sure, but he was also the one who enjoined us to turn the other cheek. He repaired Malchus's ear after Peter had cut it off. The line that unites so many of the men in Fight Church -- "Jesus Didn't Tap," a reference to "tapping out," or giving up in a match -- is disingenuous at best. Jesus didn't tap because Jesus never would have been in the ring in the first place.

The April issue of Christianity Today has an article about Manny Pacquiao, the Filipino boxing sensation who also happens to be a Christian. Pacquiao's take on his faith in his sport is fascinating:

I think it is wrong that we try to hurt one another, but I also think that God will forgive us...because it is our calling.

Pacquiao and the pastors from Fight Church probably wouldn't see eye-to-eye on this issue -- the pastors wouldn't describe MMA as "wrong," although they seem sympathetic to why other people might. The Fight Church crew really do see MMA as an evangelism issue, even though the two men fighting each other are often both Christians. The MMA crowd aren't all Christians, and the spark of faith needs igniting somehow. This is where language about "the enemy" can become especially manipulated, and in the Fight Church world, dangerous. "As Christians, there are times where you take shots," Burress preaches to his congregation. "That's where the Bible gives you your training."  Later in the trailer, another man says "This is a battlefield. We need to charge them, not wait for them to come to us." But who, exactly, is being charged here? Even if one fighter is Christian and the other isn't, how long do we indulge someone harming another person as a means of evangelism?

Then there's the question of what exactly a "masculine feel" might mean where the church is concerned. Does it mean, as Piper wrote, that the church is marked by male leadership and responsibility? Or is it a testosterone-fueled free-for-all? We need to recognize that almost any understanding we have of masculinity is going to be culturally bound, and as a result it is almost nonsensical to talk about the church as masculine or feminine, except in the sense that it is known as the Bride of Christ. Fight Church offers differing points of view -- "This ain't love," intones one pastor. But, to coin (and slightly alter) a phrase, the story largely belongs to the men in the arena.