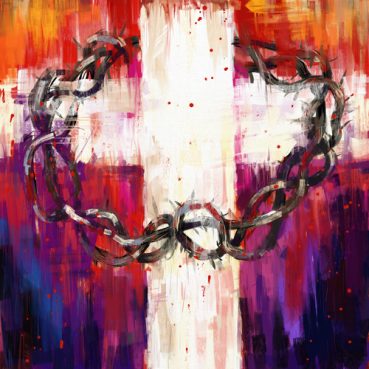 Crown of Thorns digital painting by modera 761101 via Shutterstock

It’s Good Friday, a day of mourning in the Christian world, and thousands have already made their way on Jerusalem’s Via Dolorosa, following the path they believe Christ walked.

In the United States, Good Friday is not a federal holiday, but you might live in a state or territory where it is a legal day of rest. Question of the Day: In which states and U.S. territories is this the case? Answers at the end of the roundup.

Call for Ukrainian Jews to register

Upon leaving synagogue after a Passover service this week, Jews in the eastern Ukrainian city of Donetsk were handed leaflets by masked men which instructed them to register every Jewish person in their household and pay a $50 registration fee. Failure to do so, the leaflets threaten, can result in deportation and confiscation of property.

It was supposedly signed by the head of the unrecognized pro-Russian Donetsk People’s Republic, but that group denies authorship. Making the situation more confusing is that both the Russians and the Ukrainians have been finger-pointing for months now, claiming that the other is anti-Semitic and will make life miserable for Jews. The leaflets bear a striking resemblance to the Fascist registration decrees that preceded the Holocaust. Fake or not, these 21st century instruments of intimidation sent a chill throughout the Jewish world and beyond.

Bishop T.D. Jakes answers our questions about the “Heaven” movie

Our own Adelle Banks asks the Dallas megachurch leader about producing recently released “Heaven is for Real” movie. Did he think the movie would prompt questions or provide answers? And why is he branching out into films about white people. Jakes responded:

There are still far too few scripted roles for actors of color. In the faith space, actors of color are rarer still. I am delighted that “Heaven is for Real” will reach a larger audience and provide additional opportunities to speak to people that don’t look like me or think like me. Jesus said to go into all of the world, to preach the gospel. He didn’t send me just to the black world.

Atheist to fellow atheists: come out

Kimberly Winston read “Coming Out Atheist,” and explains why author Greta Christina wants fellow atheists to copy their gay friends, reveal their true selves and find out how much better life can be. “Even in a phobic world, we are usually happier when we come out and the same seems to be true of atheists when they come out, too,” Christina said.

Reading the new @GretaChristina book and it is amazing. I’m now kinda looking forward to coming out as an atheist to my family.

An atheism association is founded . . . in Turkey

The Atheism Association is now open in Istanbul, a place to “provide legal support to people facing problems as atheists” in the mostly Muslim country. The founders say that now atheists don’t have to be alone in Turkey, a country in which the prime minister recently compared atheists to terrorists.

A bill to make the Bible Louisiana’s official book passed out of committee and could reach the state house floor soon. Here’s the story. Here’s the Establishment Clause.

The bill won approval in the Municipal, Parochial and Cultural Affairs Committee on an 8-5 vote. One member of the committee, foreseeing problems with the bill, sought to amend it so that “all holy books,” and not just the Bible, would be the official state book.

The Focus on the Family founder, and now head of Christian broadcast ministry “Family Talk,” has won a temporary injunction that prevents the federal government from forcing him to comply with the contraception requirements of the Affordable Care Act. Dobson’s objections are similar to those of the owners of Hobby Lobby, whose case the Supreme Court heard in March.

Devout and conservative Louisiana Gov. Bobby Jindal will give the commencement speech at Liberty University’s upcoming graduation ceremonies. Liberty President Jerry Falwell Jr. said he hears that Jindal speaks just “like a Baptist preacher.” Jindal is Catholic, and one of the few non-evangelicals upon whom Liberty has bestowed the honor. On the same day in the same state, Michelle Obama will speak to the grads of Dillard, a historically black university.

In the first gay marriage case post DOMA to reach a federal appeals court, the swing judge on the panel Thursday asked questions that indicate that he could side with those who support same-gender marriage. It’s always a bit risky to judge judges on their questions to lawyers, but U.S. Circuit Court Judge Jerome Holmes asked whether DOMA established that “the state cannot define marriage in any way that would trample constitutional rights, right?”

International roundup within the roundup

Vandals attacked a mosque in Northern Israel. Filipinos nail themselves to the cross despite admonitions against the Good Friday practice from Catholic clergy. The fate of more than 100 Nigerian school girls abducted by Islamic extremists is unknown.

Our Vatican correspondent, Jo McKenna, on Italy’s ‘singing nun’ and the sister’s rendition of “Girls Just Want To Have Fun.”

Chelsea Clinton, a United Methodist, is pregnant. I wonder in what faith(s) she and her Jewish hubby are going to raise the child?

May this day be a meaningful one for all who observe it.

Sign up for the Religion News Roundup below. It’s free and spamless, delivered daily to your inbox. Also, if you’re really into this religion journalism thing, apply to be our publisher.