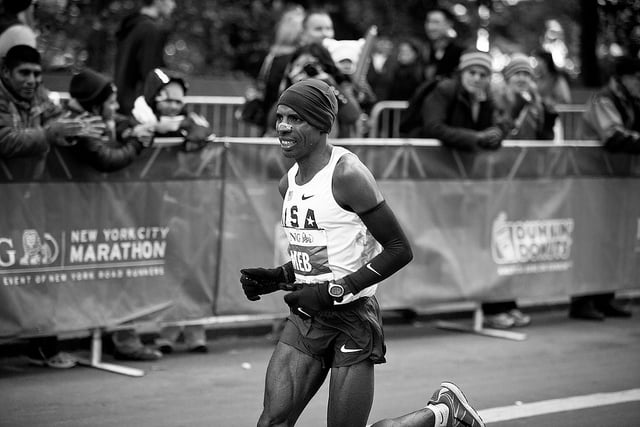 Meb Keflezighi in the 2010 NYC Marathon | Photo by elpresidente408 via Flickr (http://bit.ly/QtxwOE)

Last year, Lesli Desisa was the first person past the finish line at the Boston Marathon. He ran 26.2 miles in two hours, ten minutes, and 22 seconds — just under five minutes per mile. Desisa is Kenyan; the two men behind him were Ethiopian and Kenyan. They had plenty of time to cool down after they crossed the finish line and before two bombs went off in that area almost two hours later. Two more bombs were later found and safely disarmed.

Yesterday, Meb Keflezighi made headlines when he won the Boston Marathon. He was the first American man to do so since 1983, when Michigan native Greg Meyer ran the course in two hours, nine minutes. Keflezighi ran with the names of last year’s bombing victims on his bib and repeated the mantra “Boston Strong” to himself as he pounded the pavement. Born in Asmara, Ethopia (a city that went with Eritrea when that country gained its independence in 1991), Keflezighi moved with his family to California in1987 — his father drove taxis and worked at San Diego restaurants — and became a US citizen in 1998. After winning the New York Marathon in 2009, some were quick to speculate about whether his naturalized citizenship really conferred him the status of  real “American,” but today the entire country seemed proud to claim him as one of our own.

Grief in America has become a spectator sport. The coverage of the one-year anniversary of the Boston Marathon bombings began weeks ago, and you won’t see anyone disparaging Keflezighi’s heritage now, not when we need victory in the face of terrorism as desperately as we do in our uncertain times. The narrative we see today is easy, and it isn’t a false one — last year, the bad guys won. This year, the good guy came out on top. Keflezighi has even written a book, Run to Overcome, “the inspirational story of a man who discovered the real meaning of victory, and who embodies the American spirit of overcoming the odds.” The Christian Post was quick to claim Keflezighi as a “deeply religious” man. And he is, and that is a really great thing — his story is one of connection with God through extremely difficult endeavors of all kinds.

My question is this: When does the feel-good story become just another story we tell ourselves, in the words of Joan Didion, in order to live? How do we honor Keflezighi and all the others who have worked so valiantly and honestly to make it onto the pavement that day without turning this story into a Hallmark narrative about strength and resilience? “This is a time to celebrate our independence,” a young spectator told ESPN’s Sports Center last night. And the sentiment is true, but the fact remains that three people are dead as a result of last year’s bombings and hundreds more were injured. How can the somber fact of death coexist with the exultant triumph of athletic achievement and the larger symbolism of an American man making this remarkable achievement?

I don’t know the answer. I teared up watching this video of Keflezighi’s win, and I defy you to watch without emotion. It’s not that we shouldn’t cry. It’s that the story is never quite as simple as we want it to be.