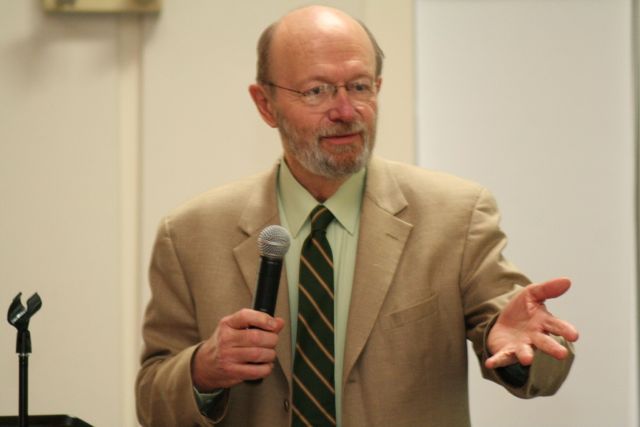 This morning I learned to my sorrow that Glen Harold Stassen –- Fuller Seminary professor, author, ethicist, theologian — passed away on Saturday morning. (You can read a great tribute from his colleague David Gushee here.)

I got to know Glen as his editor at Westminster John Knox Press. I had the privilege of working on his 2012 book A Thicker Jesus: Incarnational Discipleship in a Secular Age, which I’m sad to say turned out to be his last book-length project.

I find it hard to believe that last sentence even as I type it, because Glen was bursting with ideas for other books. I don’t know when I have met such an energetic and intellectually alive person.

But even more than his keen mind, I will remember his humility, which was a great example to me.

Let me explain by asking you to put yourself in Glen’s shoes. Imagine you’re a senior scholar at the top of your game. You’ve published nearly a dozen books and dozens of articles; you’ve taught at some of the best schools in America and Europe; you know all the top theologians. You studied with Reinhold Niebuhr, for heaven’s sake. You’re a rock star.

So when you turn in your manuscript to the editor who is young enough to be your daughter, you kind of expect to be done.

Instead she sends it back to you filled with virtual red ink, complaining that’s it’s too long and sometimes too dense for a general reader. She wants you to pare it down and make it more accessible, which involves major reorganization.

You comply graciously . . . and your excitement about the book only grows the harder the editor makes you work. She makes you cut tons of material. She has you get official permission for some direct quoting, which winds up costing you over $400. She drives you to revise and then revise again.

And yet you still send her grateful, enthusiastic emails and tell her how wonderful it feels to have an editor be totally blunt with you about what is not working:

So there’s the essence of my interactions with Glen Stassen. Funny, kind, and gracious, he was thrilled to learn new things, even in his mid-70s.

And I in turn learned from him, in the courage of his deeply held theological convictions and his commitment to a “thicker Jesus” – in other words, a Christianity that was robust enough to transcend the watery firmament of culture and speak truth to power, even at personal cost.

Good-bye, Glen. Somehow I have a feeling that you are walking around heaven in utter delight at all the new ideas and people you will encounter there, but you will be missed around here.