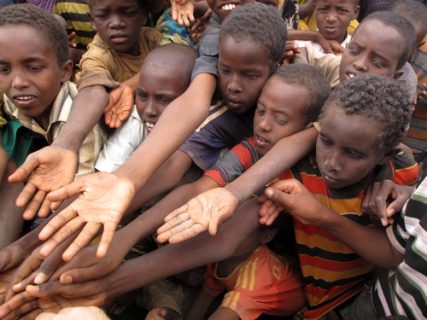 Unidentified children stretch out their hands at the Dadaab refugee camp where thousands of Somalians wait for help because of hunger on Aug. 15, 2011.

(RNS) Despite progress in defeating extreme global poverty, most Americans see no end in sight, according to a survey sponsored by Compassion International.

Christians who attend church at least monthly and consider religion very important in their life overwhelmingly (96 percent) expressed concern about the world’s poorest people. But they were skeptical that global poverty could be ended in the next 25 years. Only 41 percent of the group said it was possible.

And yet Scott Todd of Compassion International, the Christian nonprofit agency that sponsors 1.5 million children abroad, remains upbeat. He sees hope in the numbers of “practicing Christians” who express concern about poverty and a willingness to do more.

Other groups — including less observant Christians and people of other faiths or no faith — showed notably less concern and a higher degree of skepticism in the survey conducted by Barna Research.

Todd, senior vice president for global advocacy, said the bleak numbers can be turned around if potential donors are better informed. 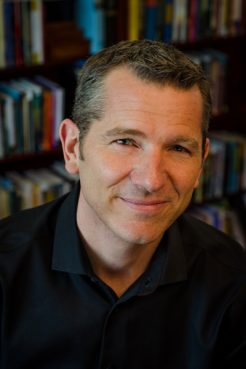 The survey offered a target date of 25 years for altering the lives of 1.4 billion people who need clean water, shelter, sufficient nutrition and basic health care such as antibiotics and vaccines.

“That is not a magic date, but if you ask people about fighting poverty without a time frame, they can’t assess it,” Todd said. “They give answers like ‘after the Second Coming.’ We know there has been incredible progress

and the world has seen an incredible drop in poverty in one generation. But people don’t know this.”

Only 32 percent of all adults see an end to poverty in 25 years. The top five reasons they give for why this can’t be done:

Again, Todd was not surprised. Few realize that scandalous failures — theft, profiteering, bungled delivery — are not the norm today, he said. “We have seen a steep rise in transparency, efficiency and democracy have led to improvements.”

The survey found that four in 10 people said they gave nothing in 2013 to combat global poverty;  the median gift was just $5 per month for all adults. However, it was more than double — $13 per month — for practicing Christians (38 percent of all surveyed).

“The practicing Christians may not be the largest group, but if they increased their giving by just 1 percent, we’d have $25 billion more for the work of supporting the poor,” Todd calculated. “We know people are grief-stricken by poverty, but we want them to see an opportunity to make history, to end poverty in a generation.”