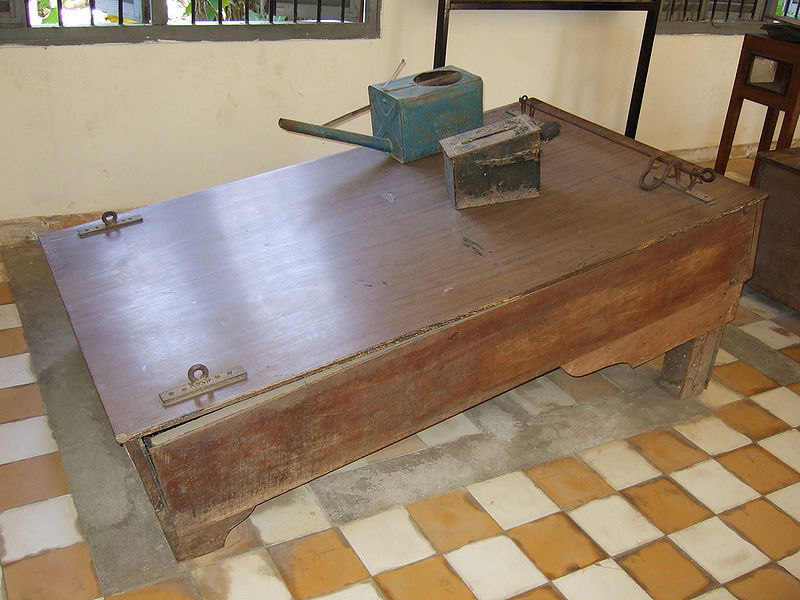 A Water Board used by Khmer Rouge

Far be it from me to defend Sarah Palin’s NRA laugh line: “Waterboarding is how we baptize terrorists.” It summons up an image of forced baptism, something my forebears were sometimes made to undergo.

That said, I think it’s a distraction from the obscenity of waterboarding to focus one’s outrage, as Rod Dreher and Mollie Hemingway do, on Palin’s abuse of the Christian practice of baptism. In Hemingway’s words, “Joking about baptism in the context of this aggressive action suggests that we don’t think baptism is as life-giving or important as it is.”

Really? English is filled with locutions that derive from Christianity but which have become, at most, mild metaphors. As in:

Should Sarah Palin be crucified for her ugly joke? She’s a relic of the last decade, a confirmed  culture warrior who needs to have her demons exorcised. Of course, if she goes ahead and confesses the error of her ways, we’ll give her short shrift.

For that matter, who thinks it’s disrespectful to real baptism when someone speaks of a stressful initiation as a baptism by fire (cf. Matthew 3:11)?

Hemingway considers Palin’s remark “a perfect example not just of civil religion but also how civil religion harms the church.” Notwithstanding Sean Hannity’s claim that torturing bad guys “is the way America rolls,” I’d have to disagree.

Sure, you could interpret Palin as construing waterboarding as a kind of civil sacrament, by which “we” render our enemies innocuous. But that doesn’t make it the same as “under God” in the Pledge of Allegiance. American civil religion may have its shortcomings, but it cannot be blamed every time some religious language is used to defend the indefensible.