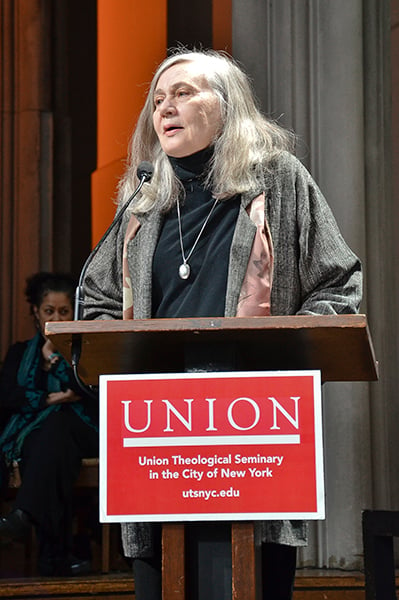 NEW YORK (RNS) Pulitzer-Prize winning author Marilynne Robinson draws a wide fan base that spans lovers of serious literature, including many conservative Christians. This fall, she will release “Lila,” a follow-up to her earlier novels “Gilead”  (2004) and “Home” (2008) about a 1950s-era Iowa town that won her many accolades.

Robinson’s diverse fan base was described in The American Conservative as “Christian, not Conservative.” As the author noted, Robinson is far from holding up ideals put forward by the religious right. But that doesn’t stop conservative Christians from engaging with her writing.

Before giving an address at Union Theological Seminary this spring, Robinson spoke to Religion News Service about a variety of social issues. In the interview, Robinson explained why she thinks Christians are fearful, why she loves theologian John Calvin and whether she’ll join Twitter. Some answers have been edited for length and clarity.

Q: In your book “When I Was A Child I Read Books,” you refer to Christian fears. What kinds of fear do you see in Christians today?

A: There are so many kinds of fear Christians have now. There are some Christians who are anxious about identifying with tradition, because of any suggestion of exclusivism that brings with it; there are Christians so scared of the world that they want to carry a gun. Those are two very different kinds of anxiety, but I do think in both cases it’s a little bit unChristian to have thinking and behavior governed by fear.

Q: Are there issues that you are particularly concerned about right now?

A: Everything for me comes down to the idea that people are images of God. This makes me highly reluctant to see wars fought in any circumstances, and especially when no rationale can be offered for it. That’s just folly. I don’t understand the state of mind that makes people at ease with the idea that gun laws are being relaxed to the point that makes it overwhelmingly likely that homicidal people will have possession of these military weapons.

How did we get so scared of each other? I have never felt as if I was in a situation that could remotely suggest to me the appropriateness of lethal violence. And I’m not living in a gated community in Florida. I mean, who are these people? And what do they get out of all this fear?

Q: Gay marriage is one of the culture’s hot-button issues right now. Can people coexist in that controversy?

A: Sometimes I wonder about the authenticity of the controversies themselves. My own denomination (the United Church of Christ), has blessed same-sex relationships and married them as quickly as it became legal in my state. It has been a process that’s gone on for a long time. Nobody gives it a thought, so when you read in the newspaper that there are people calling down brimstone, it’s startling. In time it will become an old issue for the culture that simply will not bring out this kind of thing anymore.

Q: For Christians who hold the view that marriage is between a man and a woman, do you think they’ll become a smaller group over time?

A: It’s hard to know. There has never been a period in world history where same-sex relationships were more routine and normal than in Hellenistic culture at the time of Christ. Does Jesus ever mention the issue? I bet it must have been all around him. You can get in a lot of trouble eating oysters if you are a literalist about Leviticus. I’m a great admirer of the Old Testament. It’s an absolute trove of goodness and richness. But I don’t think we should stone witches. And if you choose to value one or two verses in Leviticus over the enormous, passionate calls for social justice that you find right through the Old Testament, that’s primitive. There are a thousand ways that we would all be doomed for violating the Sabbath and all kinds of other things, if we were literalists.

Q: As you may know, there’s a big case in front of the Supreme Court right now with Hobby Lobby and another group fighting over the contraceptive mandate in Obamacare. Do you see this as an issue for religious freedom?

A: That seems to me like an artificial problem. I wish I could go to the Supreme Court every time I saw somebody trying to cut food stamps, or pre-K, or any of these other things. These people that are so attentive to babies that don’t exist yet, and so negligent of babies that need help. It’s part of the narrowing of the culture, so that only certain things are considered to be religious controversies. It’s a religious controversy, to me, that we would think of cutting back on help for the poor. Especially after our financiers have crashed the economy.

Q: You have a pretty big fan base among Calvinists (those who follow the works of John Calvin), including ones who would call themselves conservative. These people would probably not share your point of view on most social issues, but they love your work. Do you see a disconnect?

A: If they read Calvin, I’m happier. Then they can love my Calvinism afterward. I’m always happy when people love my books. I hope that there’s a Christian resonance that they are truly responding to, that I’ve truly communicated.

Q: Why do you think people pick up on your Calvinism?

A: It’s very exotic to be a Calvinist and to say so outright! In a strange way, it was American literature that introduced me to Calvin. Because it’s incredibly important for Emily Dickinson and Walt Whitman who lived in a period and a culture where his ideas were profoundly entrenched.

Calvin has a strange reputation that is based very solidly on the fact that nobody reads him. I found that he’s a beautiful theologian. I was, and continue to be, struck by the power of the metaphysics and the visionary quality of his theology, which no one seems to have any awareness of.

Q: Can you explain what in Calvinist theology was so profound to you?

A: One of them certainly was the importance of human consciousness. He’s also a humanist; he’s terrifically admiring of what the human mind does. He says we have completely fallen away from the glory of God, and look what we are, and then he describes this glorious creature. The implication is that if we were to be in our un-fallen condition we would be spectacular. He allows for the reality of great evil. He was living in the 16th century, which was a brutal period. He was ready to grant the dark side of reality, and completely lyrical about what is splendid about it, including the stars and including human consciousness, human presence, most profoundly.

Q: Since you are now part of a United Church of Christ church, does the decline of the mainline concern you?

A: There’s always the question: decline relative to what? For example, you have the situation of Roman Catholicism at the moment, which has been impacted by highly visible scandal. Is this permanent, or is it a protest on the part of people who are just too irritated to go to church every Sunday? You can’t really tell. The cure for the problems of the mainline would be to improve the meaningfulness of the theology.

People attempt to translate the language of the sermon into something relevant, like football, or economics, or something like that, and it drives people nuts. When you go to any church and somebody asks, “Was it a good sermon?” And if it was a sermon about how we almost got into the Rose Bowl, then no, it was not a good sermon.

Q: What about the growing number of Americans who don’t identify with religion — the “nones”? What implications does that have for culture and society?

A: There are lots of people who are very religious and haven’t settled on a tradition. To talk about affiliation, or the absence of it, is different from talking about whether or not the interiors of people have become empty of the idea of God. I don’t think that really happens with people very often.

I’ve been in mainline churches, where all they do is say, “We’re dying. Our stock has crashed. Nobody cares.” I think, “Well, thank you for that glimpse of the divine!” It’s very typical in this culture to say things like, “Education is collapsing.” I’ve taught in foreign universities. We don’t do badly, educationwise. Believe me.

Q: Final question: Are you going to get on Twitter anytime soon?

A: I don’t have anything to with any of that. I’ve never even seen Facebook. People ask me why I don’t write about contemporary culture. I’d have to educate myself about what contemporary culture is, because all of these words are essentially meaningless to me. Then if I used them they would be passe by the time I had learned everything about them. So I might as well just write about 1956.