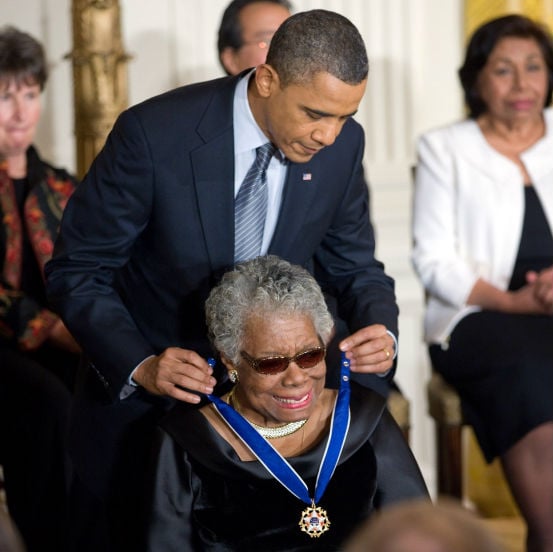 Yesterday I learned via Facebook (where else, nowadays?) that Maya Angelou had passed away.

Over the last 24 hours I’ve seen several people refer to Angelou as the “caged bird” of her writings. She is now free, they suggest — free of the mortal body that caged her, that cages us all.

Death has released her, and now she is in heaven.

I beg to differ. Angelou is not in heaven “now.” Her writings show a joyful person who was never not in heaven. To me, an ongoing theme of her remarkable work has always been its full-on, all-in commitment to living life in the kingdom.

That’s God’s kingdom in the here and now. Angelou wasn’t waiting for some pie-in-the-sky release to an ethereal realm.

And that’s another thing. The contemporary heresy that sees the human body as an obstacle to be overcome, as something that will no longer burden us in the afterlife, is just that — a heresy. It is not a Christian idea but a platonic one.

Christians like Angelou (who, as she put it, was not so much a Christian as someone trying to be a Christian) know better. The body is a gift, one we get to take with us, albeit in a perfected form.

If you read her memoirs you know that Angelou didn’t get to that perspective on the human body overnight. As a black woman who towered over most people, including men, she struggled early on with her body — especially because she was a survivor of abuse.

But she did get there. And any theology that claims that her soul has somehow been freed from the cage of her body hasn’t understood her work or her legacy:

Pretty women wonder where my secret lies.
I’m not cute or built to suit a fashion model’s size
But when I start to tell them,
They think I’m telling lies.
I say,
It’s in the reach of my arms,
The span of my hips,
The stride of my step,
The curl of my lips.
I’m a woman
Phenomenally.
Phenomenal woman,
That’s me.

One way to honor Angelou is to love the bodies we have, and the lives we’ve been given. Right here, right now.

Because the kingdom of God is among us.