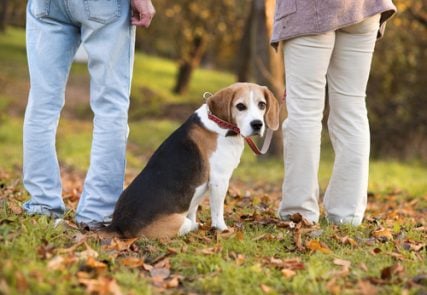 Couple walking their beagle dog in the autumn countryside.

VATICAN CITY (RNS) Pope Francis on Monday (June 2) warned married couples against substituting cats and dogs for children — a move that he said leads to the “bitterness of loneliness” in old age.

The pope made his comments as he celebrated daily Mass with 15 married couples in the chapel at the Santa Marta residence where he lives inside the Vatican.

He reminded the couples, whose marriages ranged from 25 to 60 years, of the need for faithfulness, perseverance and fertility in maintaining a Christian marriage.

But he went a step further and strongly criticized those couples who choose not to have children, saying they had been influenced by a culture of “well-being” that says life is better without kids.

“You can go explore the world, go on holiday, you can have a villa in the countryside, you can be carefree,” the pope said.

“It might be better — more comfortable — to have a dog, two cats, and the love goes to the two cats and the dog. Is this true or not? Have you seen it?

“Then, in the end this marriage comes to old age in solitude, with the bitterness of loneliness.“

The 77-year-old pontiff made his comments after recent figures confirmed a drop in birth rates in the U.S., Italy and elsewhere.

Figures released by Italy’s official statistics agency Istat last week showed the country’s birth rate hit a record low in 2013, with the birth of only 515,000 babies — a drop of 64,000 over the past five years — and a worrying trend as the population ages.

Last year, Time magazine provoked a national debate with a controversial issue entitled “The Childfree Life,” which also showed a dramatic fall in the U.S. birth rate and the role of personal choice.

“Married life must be persevering, because otherwise love cannot go forward. Perseverance in love, in good times and in difficult times, when there are problems: problems with the children, economic problems,” the pope said.