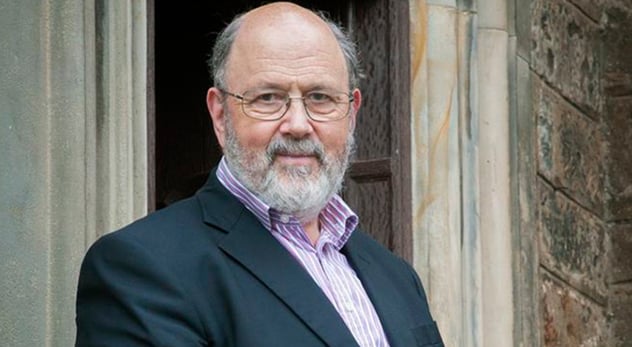 One of the most formidable figures in the world of Christian thought weighs in on hot topics such as natural disasters, homosexuality, and whether he thinks Christians can believe in Darwinian evolution.

(Note: This is part two of my interview with NT Wright. The first part addresses the Bible and why he doesn’t call himself an inerrantist.)

TIME Magazine called him “one of the most formidable figures in the world of Christian thought.” Newsweek once labeled him “the world’s leading New Testament scholar.” His name is N.T. Wright, and he has just written a controversial book on the Bible.

In “Surprised by Scripture: Engaging Contemporary Issues,” Wright comes out swinging on theological hot buttons such as Darwinian evolution, whether Adam was a historical figure, and why he thinks the Bible makes space for women pastors. Here, we discuss the issues of homosexuality, science and gender.

NTW: Some have, some haven’t. Sadly, many have been taught that there is a straight choice: either biblical Christianity or Darwinian evolution. Actually, some of the great conservative American theologians in the late 19th century—I’m thinking of B. B. Warfield and others—didn’t see it like that at all.

The problem is that Darwin’s findings were “heard” by the wider community within the popular Enlightenment “Epicureanism” (Jeffersonm etc.) in which God—if there is a God—is a long way away, so the world just does its own thing. That is a modern version of an ancient philosophy which Jews and Christians always rejected. The trouble is that much “conservative” Christianity in America has bought into the same split-level worldview and simply emphasizes the “God” side of it. The false “either-or” of “Bible or Darwin” is thus itself a dangerous symptom of a sub-Christian culture. I explain all this in that first chapter, of course. But yes, it is a false choice. We urgently need to take a couple of steps back in order to see the issues more clearly and go forward with confidence.

RNS: There’s a chapter in your book about natural disasters and the problem of evil. I’ve heard some theologians outright declare that God “caused” an earthquake or flood or tsunami. Is this wrongheaded in your view?

NTW: The way in which God “causes” things in the world is a complicated and difficult issue. It’s important that we resist the temptation to think of God as the kind of celestial CEO, sitting in an office upstairs and pressing buttons to make some things happen and stop other things. Apart from anything else, God has said from the start that he wants to work in the world through human agency. It isn’t a zero-sum game—either God causes things or they happen by “natural causes”, whatever that means.

Our split-level worldview forces us into dangerous and foolish places (when someone says that God arranged for them to be held up in traffic so they missed being in the Twin Towers that day . . . what about all those who did make it in to work? What does that say about them? And so on). God is sovereign; but the world is out of joint, and God’s solution to this, to work from within through the death and resurrection of Jesus and the power of the Spirit, is not that he will then wave a magic wand and automatically stop everything bad happening, but that he will go on groaning from within the heart of the painful world until the new creation is born (Romans 8.18-27).

RNS: In your chapter, “A Biblical Case for Ordaining Women,” You challenge the way many today read Galatians 3:28, which asserts that, in Christ, “there is no male and female.” How have we gotten this wrong?

NTW: Galatians 3:28 does not mean that differences between men and women are now obliterated. It’s rather like what Paul says about Jews and Gentiles. The point he’s making in Galatians 3 isn’t that all differences are erased, but that in terms of membership in God’s people they are irrelevant. In Romans 11, he is very clear that a Jewish Christian and a Gentile Christian, though both Christians, are coming from somewhere different, and need to be aware of the particular challenges and dangers of their position. I’ve written a lot more about this in Paul and the Faithfulness of God.

RNS: Your book hits a lot of the hottest debated issues of the day, but you don’t address sexuality. Why did you choose to skip this one?

NTW: I didn’t choose to skip it. It’s just that I haven’t been asked to do a lecture or equivalent on that topic. The book is a collection of things I have been asked to talk about; none of the chapters was written just “to address hot topics.”

RNS: Fair enough. Then how does your view of scripture inform the sexuality debates today? Would your approach to the Bible allow, for example, the blessing of monogamous, lifelong same-sex relationships?

NTW: Monogamous, lifelong same-sex relationships were known in the ancient world as well as in the modern—there is plenty of evidence, despite what people sometimes say. When Jesus reaffirms the traditional Jewish standards of sexual behavior (he was talking in a Jews-only context where people would know what his shorthand sayings meant), and when Paul, speaking in a largely Gentile context, spells out a bit more clearly what is and what isn’t part of the new-creation lifestyle for those “in Christ,” this way of life was always counter-intuitive in that world, as it is again today.

But it’s important that we do not reduce the Bible to a collection of true doctrines and right ethics. There are plenty of true doctrines and right ethics there, of course, but they come within the larger thing, which is the story of how the Creator is rescuing and restoring the whole creation, with his rescue and restoration of humans at the heart of it. In other words, it isn’t about “do we allow this or that?” To ask the question that way is already to admit defeat, to think in terms of behavior as a set of quasi-arbitrary, and hence negotiable, rules.

We must ask, with Paul, “This new creation God has launched in Jesus—what does it look like, and how can we live well as genuine humans, as both a sign and a means of that renewal?” We need to remind ourselves that the entire biblical sexual ethic is deeply counter-intuitive. All human beings some of the time, and some human beings most of the time, have deep heartfelt longings for kinds of sexual intimacy or gratification (multiple partners, pornography, whatever) which do not reflect the creator’s best intentions for his human creatures, intentions through which new wisdom and flourishing will come to birth. [tweetable]Sexual restraint is mandatory for all, difficult for most, extremely challenging for some.[/tweetable] God is gracious and merciful but this never means “so his creational standards don’t really matter after all.”