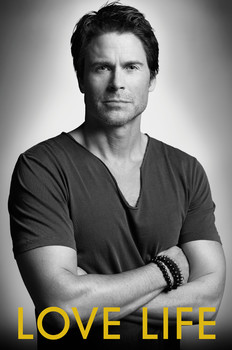 Yeah, I’m as surprised as you are by this post. But bear with me.

Rob Lowe‘s new book, Love Life, is actually a bit of a shock. Not that it devolves into the kiss-and-tellishness of other Hollywood memoirs (though there are certainly some dishy moments). No, I mean shocking as in actually worth reading. As in smart.

I think this guy has learned a lot since the drug-hazed Brat Pack days of the 1980s.

If there’s one theme that I would say ties the whole book together, it’s that of fathers and sons. The most touching moments are when Lowe talks about raising, and saying good-bye to, his two boys.

When I first listened to the book I got pretty misty at the point where Lowe described what it was like to drop his older son off at college — the emptiness of loss mixed with the fullness of pride in his son and all he had accomplished. (Here’s an excerpt of that scene on Slate.)

But the theme of fatherhood is discernible elsewhere too. Lowe doesn’t talk much about his own father, but he does write extensively and movingly about his longtime manager, Bernie Brillstein, who died in 2008. This is a particularly funny section of the audio book since Lowe does a great impersonation of Brillstein and some of his other clients, from David Spade to Kermit the Frog. But it’s touching as well, since it’s clear that Lowe learned lessons from Brillstein about faithfulness, good humor, loyalty, and a strong work ethic.

Lowe also spends a good deal of time telling the historically fascinating tale of tracking down a Revolutionary War ancestor, who was and then was not and then was a hero of the war. (You kind of have to read it. Or just watch the Who Do You Think You Are? episode here.)

No, it’s not a deeply philosophical book, but as a Father’s Day gift you can’t go far wrong. Bonus points if your dad is a fan of The West Wing, votes Republican, and still has a childhood crush on Melissa Gilbert.