Back of graduates during commencement. Image courtesy of hxdbzxy via Shutterstock.
June 17, 2014
Lauren Markoe

Back of graduates during commencement. Image courtesy of hxdbzxy via Shutterstock.

The Supreme Court is likely to release its decision in the biggest religion case of the year -- or several years -- next week. But while waiting for the verdict on Hobby Lobby, read up on the big religion case the Supremes Monday announced that they're not going to consider . . . at least not yet.

A suburban public high school in Wisconsin holds its graduation in a church, though nothing religious happened. Still, the 7th Circuit ruled it unconstitutional. On Monday, the Supremes announced that they're not taking the case, so the ruling still stands.

Justice Antonin Scalia says they should have taken the case. Daniel Bennett, who studies the conservative legal movement, offers his take on the court's pass.

In total, they shot 48 people dead. They is the al-Qaida affiliated group al-Shabaab. It operates mainly in Somalia but across the border in the Kenyan town of  Mpeketoni, al-Shabaab militants went door-to-door asking families, many of whom were watching the World Cup, if they were Muslim and spoke Somali. A 'no' to either question was met by a spray of bullets.

Decline in donations to churches

The Giving USA report, released today, shows that Americans donated 1.6 percent less to religious groups in 2012, while overall charitable donations rose 3 percent and higher for certain sectors: 7.4 percent for education and 6.3 for the arts and humanities.

Of the 100 largest gifts, only one went to a religious organization.

Sarah Pulliam Bailey shows us how the vanguard of the GOP is Catholic and evangelical -- often in the same politician. She writes:

Look no further than the stunning Virginia primary victory of Dave Brat, a Catholic with degrees from a Reformed Protestant college in Michigan and Princeton Theological Seminary, who took down House Majority Leader Eric Cantor last week.

Despite rebukes from Catholic San Francisco congresswoman and House Minority Leader Nancy Pelosi, the archbishop of San Francisco said Monday that he must support one-man, one-woman marriage and will be going to Thursday's March for Marriage in Washington. Archbishop Salvatore Cordileone, who chairs the U.S. Conference of Catholic Bishops' subcommittee on the promotion and defense of marriage, also got flack from other liberal politicians and clergy.

Cardinal on the wing

Man charged for threatening to kill leader of CAIR

Bernhard Laufer, 56, began sending threatening emails last year to Nihad Awad, the national executive director of the Washington-based Council on American-Islamic Relations. Laufer is already facing attempted murder charges for the alleged stabbing of a man at a Queens mosque in 2012 while yelling, "I will kill you Muslim." He was out on $200,000 bail during all the threatening emailing, which accused CAIR of setting him up. I'm no lawyer, but how does this guy get bail? 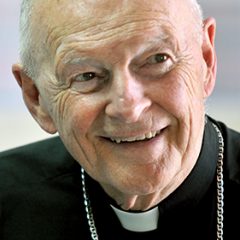 New grads: Leave your religion off your resume

You're less likely to get a call from a prospective employer, especially if something on there indicates you're Muslim. But anything that suggests faith seemed to be a liability according to a new study nicely summed up by Cathy Lynn Grossman.

Does the focus on prayer for three kidnapped Israeli teenagers reflect a skewed view of God and man?

After an official reversal, beer may be served at a Utah ski resort's Oktoberfest.