(RNS) It’s 93 degrees in Texas and the Rev. Jeff Hood is walking 200 miles across the state. What would compel somebody to do that? He wants to end the death penalty — and he is not alone. 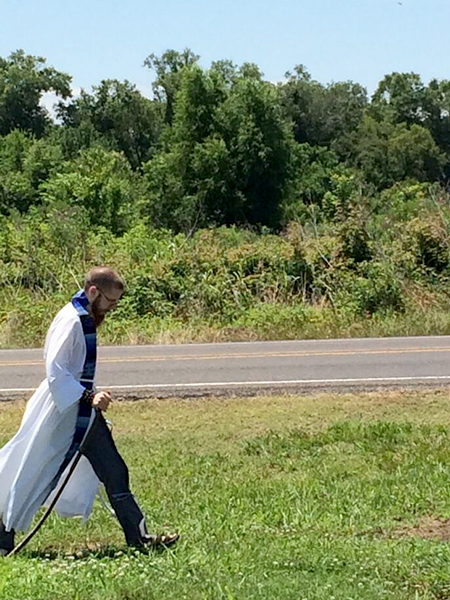 The Rev. Jeff Hood is a self-described “committed activist, visionary writer and radical prophetic voice to a closed society.” He’s walking across Texas in support of ending the death penalty. Photo courtesy of Mikala Hood.

Hood is a Southern Baptist pastor, deeply troubled by his denomination’s stand on capital punishment and his state’s standing as the most lethal in the U.S. Texas executed 515 people since the reinstatement of the death penalty in 1976, a whopping 37 percent of all U.S. executions.

Hood has been a longtime organizer and board member for the Texas Coalition to Abolish the Death Penalty, a movement that is gaining some serious momentum these days.

Even as Georgia and Missouri executed two inmates earlier this week, a growing number of Texans — and Americans in general — are questioning the death penalty.

A recent ABC News/Washington Post poll shows we are at the tipping point, with more than half of Americans opposed to the death penalty. For some the problem is racial bias — in Texas, it is not uncommon for an African-American to be found guilty by an all-white jury. In fact, in considering “future dangerousness,” a criterion necessary for execution in Texas, state “experts” have argued that race is a contributing factor, essentially that someone is more likely to be violent because they are black — prompting articles such as this New York Times op-ed piece: “Condemned to Die Because He’s Black.”

For others, the problem is economic: Often the decisive factor on execution is not guilt or innocence but whether one is rich or poor. And for others still, the problem is constitutional: Equal justice under the law should mean murderers get the same punishment for a crime committed in Connecticut, which abolished the death penalty, as in Texas.

And more and more folks are feeling the cruelty of it all, wasting so much energy and resources on killing people to show that killing is wrong. The botched Oklahoma execution over a month ago left a man writhing in pain for 45 minutes before he died of a heart attack.

It’s not just liberals anymore, but all sorts of reasonable people (including conservative faith leaders), who are convinced that we can do better than this as a country — and we must.

For Hood, opposition to the death penalty is rooted in his faith.

“The death penalty makes us both killers and victims,” he said. “Only love can heal us.”

He began his journey by meeting with the men on death row, for whom he is a spiritual adviser. As he left the prison he said, “The wind of God is at my back,” and set out on his journey.

We discussed the victims of violence, heroic families like Murder Victims’ Families for Reconciliation and Journey of Hope — folks traumatized by the 10 years of trials and millions of wasted dollars that go toward executions, and especially the fact that taking another person’s life does not bring back their lost loved ones.

Hood and I also talked about Jesus, the lens through which we read the Bible and the world around us. He is haunted by the way Christianity has been misrepresented when it comes to execution.

“There is a cross on top of the execution chamber in Huntsville,” he said. It’s a contradiction that not enough Christians recognize — Jesus was a victim of the death penalty, not a proponent of it. Hood described his hope that if more and more Christians embraced Jesus’ life and teaching, we would end the death penalty in America, where Bible Belt states constitute the strongest pillars of the practice. He is hopeful, and so am I.

Hood described the gracious hospitality he has received — gifts of water, food and smiles. One of the congregations hosting him is United Methodist, a denomination that declares the death penalty “denies the power of Christ to redeem, restore and transform all human beings.” Amen.

One of his favorite stories is about an encounter with a passer-by who stopped to talk with him, unsure of her stand. He explained how Jesus’ command to love your neighbor as yourself and to love your enemies makes it difficult to execute a person.

“That makes a lot of sense,” she said. Indeed it does.

The gospel is good news. The merciful will be shown mercy. March on, brother Jeff. I hope with every step you take, every mile you walk, we get a little closer to abolishing the death penalty in Texas, in the U.S. and in the world. March on, brother; march on to the Promised Land.

(Shane Claiborne is an author and activist, currently working on a book on the death penalty. You can find him at redletterchristians.org.)