CASERTA, Italy (RNS) Pope Francis sought forgiveness for decades of persecution of Italian Pentecostals when he met with around 300 evangelicals from the U.S., Argentina and Italy in the southern town of Caserta on Monday (July 28). 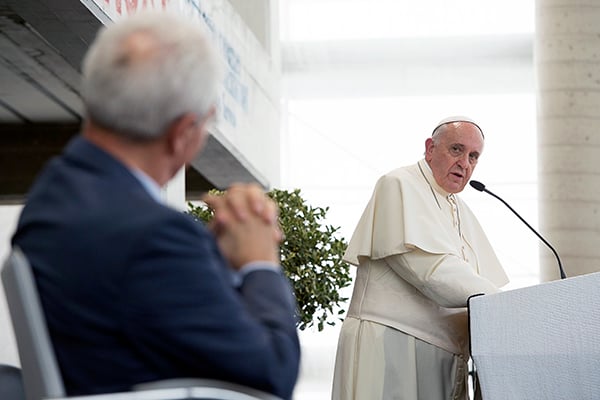 Pope Francis talks with Giovanni Traettino, a Protestant pastor and his friend, in Caserta, Italy, July 28. Pope Francis said he knew people would be shocked that he would make such a trip outside of Rome to visit a group of Pentecostals, “but I went to visit my friends.”

The pope made his second visit in as many days to the Mafia stronghold near Naples, this time to meet evangelical pastor Giovanni Traettino, whom he befriended while he was archbishop of Buenos Aires.

During the visit, Francis apologized for the persecution suffered by Pentecostals under Italy’s fascist regime in the 1920s and 1930s and urged Christians to celebrate their diversity and unity.

“Catholics were among those who persecuted and denounced the Pentecostals, almost as if they were crazy,” Francis said.

“I am the shepherd of the Catholics and I ask you to forgive my Catholic brothers and sisters who did not understand and were tempted by the devil.”

Since his election last year, the pope has been reaching out to other faiths and has held talks with Protestant, Jewish and Muslim leaders. On Monday, he went even further by apologizing for what Catholics had done.

Luca Baratto, a pastor from the Italian Federation of Evangelical Churches, said the pope’s apology was unexpected and greatly appreciated.

“It is very important to remember the racial laws through which the Pentecostals were victims under fascism,” he told the Italian news agency, AdnKronos. “We really appreciate the opening of dialogue by this pope.”

Calling the pope “my beloved brother,” Traettino said the evangelical community was deeply grateful for the visit, which would have been unthinkable until recently. 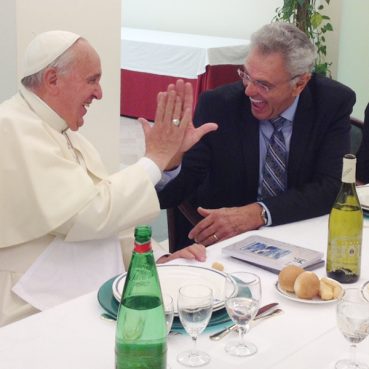 James Robison explains a “high five” to Pope Francis at the Vatican on June 24, 2014. During their meeting, they agreed all Catholics and Protestants need to come to know Jesus personally.

Indeed, whereas now-retired Pope Benedict XVI channeled his energies into trying to reconcile with traditionalist Catholics, Francis has spent more time reaching out to conservative evangelical leaders; his recent three-hour meeting with American televangelists raised some eyebrows and resulted in what was dubbed the first-ever papal high-five.

“With a single gesture he has opened the door wider, overcoming any complications of protocol and going directly to the heart of human relations,” Traettino said of his meeting with Francis.

One participant said it was a very emotional moment when the pope asked forgiveness, and “everyone was in tears.”

The pope arrived in Caserta by helicopter and after a private conversation at Traettino’s home, he met with the community of the Evangelical  Church of Reconciliation at the site of their church, which is under construction.

A notable absentee was Bishop Tony Palmer, the charismatic preacher who used a cellphone camera to record Francis’ appeal for unity between Catholics and evangelicals. He was killed just over a week ago (July 20) in a motorcycle crash in the United Kingdom.

On Saturday, around 200,000 faithful gathered for the pope’s first stop in Caserta, a stronghold of the notorious Naples Mafia known as Camorra.

The pontiff did not mention the Camorra, which runs a vast organized crime empire including drug trafficking, money laundering and extortion, but spoke out against “corruption and lawlessness” during his address.