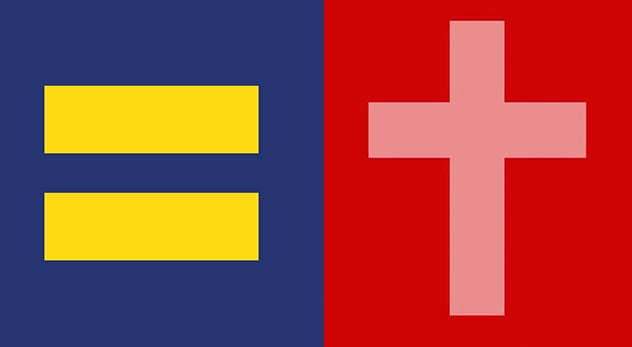 While some Christians argue there can be no middle ground on same-sex behavior, one author argues for a third way approach. “In a perfect world, we would be free to hold our deepest beliefs and no one would experience marginalization,” says Wendy VanderWal-Gritter.

“There is no third way,” Southern Baptist Theological Seminary president Albert Mohler wrote in a June 2 blog post. “A church will either believe and teach that same-sex behaviors and relationships are sinful, or it will affirm them.”

Arguing against such an assertion is difficult if you follow American religious life closely. Pastors in the United Methodist Church have proposed a “middle path” too, but some now believe a denominational split over the issue is imminent. Some in the Evangelical Lutheran Church in America once claimed they held to a “middle way” in the debate, but they can hardly claim to be Switzerland after electing their first openly gay bishop last year. One strains to find an example of a Christian organization who has been able to thread the needle on the matter.

But one Christian theologian, Wendy VanderWal-Gritter, says a third way is possible. In new book, Generous Spaciousness: Responding to Gay Christians in the Church, she lays out her vision for faith communities where various perspectives on sexuality can thrive alongside each other. Wendy claims that the church has been distracted with the politics around homosexuality and our obsession with orientation change and causation. A self-described “eclectic Calvinist,” Wendy is a theologian and PhD candidate who serves as executive director of New Direction Ministries. Here, we discuss her provocative ideas for carving out a third way on the so-called “gay issue” in the church.

RNS: Some might say that what you call “generous spaciousness” is just tolerance. Is there a difference?

WV: [tweetable]When I tolerate someone with whom I disagree, I bite my tongue a lot but I don’t open my heart.[/tweetable] Tolerating can mask all kinds of uncharitable attitudes toward the other. Where people feel forced to extend tolerance, resentment typically simmers just below the surface.

In generous spaciousness, I choose to listen deeply to the other, expecting to encounter God in our conversation. With generous spaciousness, I am seeking to experience a sense of community with those with whom I disagree. That means I intentionally contribute to an ethos of mutual respect. [tweetable]True respect doesn’t whitewash differences as if they don’t matter.[/tweetable] But in generous spaciousness I allow myself to wonder if there might be more for me to learn and discover as I build relationship with the one who sees things differently than I do.

RNS: Many have argued of late that there is no middle ground and no third way on the issue of sexuality for Christians. What say you?

WV: If middle ground is seen as some sort of wishy-washy compromise, it is rightly judged as neither upholding deeply held convictions nor working towards the undoing of injustice and oppression. However, if a posture like generous spaciousness is recognized as the narrow path of humbly humanizing the other through intentional listening, then it shouldn’t be so easily dismissed. In a perfect world, we would be free to hold our deepest beliefs and no one would experience marginalization. We should recall our interdependence and, as Desmond Tutu says, remember that if I diminish you – then I diminish myself.

RNS: One of the biggest influences on how one sees this issue is relationship. What do you say to a traditionalist congregation that fears making space for other views is just a one-way street to liberalism?

WV: [tweetable]In the way of Jesus, we are challenged to extend love to those we think have it completely wrong.[/tweetable] We can commit ourselves to such outrageous and radical love because our faith tells us that the Holy Spirit can be trusted to convict, correct, and guide others in the way they should go. That means I don’t have to control others – I can risk loving and trusting them in the confidence that God is in control.

When we gather as the people of God in our congregations, we are invited to be energized by love – not by fear, discerning together, and mutually honoring one another. But it’s difficult to listen to someone with different experiences and perspectives while focused on defending our own position.

RNS: You point out that fear can keep people from engaging this issue. How so?

WV: Fear whispers accusations that blind us to the possibility of God showing up in unexpected places. [tweetable]Fear deceives us into believing that we have to protect God.[/tweetable] We put God in our own box, failing to humbly acknowledge that our doctrines are always limited by our imperfect interpretations. God is bigger than our traditions, bigger than the Scriptures, bigger than the wisest thoughts any human being has ever had. When we are free of fear, our hearts can be open to the wonder of our wild and untamable God. When we are free of fear we don’t have to hide behind a certainty that so often smacks of arrogance and pride. And when fear has been replaced by love, shame about our bodies, our sexuality, and our desires loses its sting.

RNS: A lot of progressives feel that making space for traditionalists is regressive and even oppressive. What do you tell them?

WV: In the body of Christ, there are many different parts with many different functions – but one part cannot say to another, “I have no need of you.” It is the reaching and grasping for power and dominance that has consistently been the downfall of humanity throughout the story of Scripture. The subversive strategy of God, the incarnation, reveals that humility is the way to enact true reconciliation and justice.

If progressives dominate and alienate traditionalists, are we any further ahead? Rather, we are called to find unity in our diversity where we recognize that only by extending unconditional hospitality and mutual respect to each other can we participate with God in the pursuit of justice. Part of mutual respect is holding one another accountable for words and actions that dehumanize any other person and persevering until attitudes, postures, and engagement honor all human beings as image-bearers of God and worthy of dignity.

RNS: Look into your crystal ball. Where will the Western church be on this issue–both theologically and ecclesiologically–in 25 years?

WV: I don’t think this will become a non-issue theologically. Churches will still identify themselves by their strong stance – both on the right and the left. In third-way type churches this will be a non-issue in terms of relationships. [tweetable]In 25 years, LGBTQ people and their families will be a vibrant part of the church community[/tweetable], serving and using their gifts in a wide variety of capacities – but at the highest levels the question of ordination may still be debated. Some LGBTQ Christians will persevere in their third-way church. Other LGBTQ Christians will be in key leadership roles in affirming churches.

The LGBTQ Christians I know often have a tremendous capacity to extend grace because of their love for Jesus and for the church. In 25 years, I hope this testimony will have demonstrated that without the voices of our LGBTQ sisters and brothers, we are all impoverished.