In the contentious aftermath of the death of Michael Brown, the unarmed black teenager shot by police, the streets of the St. Louis suburb have been riled with demonstrators and heavily armed police. Social media has joined in concert, awash in outraged commentary at #Ferguson and #Michael Brown.

And just as 49 years ago clergy joined arms in the march on Selma for civil rights, so voices of faith are among those raised on Twitter as clergy join people flocking to the black community of the town.

Gov. Jay Nixon will join members of the St. Louis Metropolitan Clergy Coalition and other leaders at 11 a.m. #Ferguson

Twitter #NMOS14, calling for a national moment of silence, has prompted scores of communities from Hawaii to Maine to hold vigils and a moment of silence at 7 p.m. (Eastern) to honor Brown’s memory — and pray for justice in Ferguson. A New York activist who goes on Twitter as @Feministajones launched the tag and offers a link to a list of locations.  Louisville, Ky. pastor Kevin Smith says:

Glad to be part of a multigenerational/multiethnic Baptist congregation. May we “weep with those who weep” – in Iraq and Ferguson. #sinhurts

Rev. Jamal Bryant, pastor of Pastor of Empowerment Temple in Baltimore, MD., is back in Ferguson, his second trip to stand with peaceful demonstrators. He tweeted today.

While we have the right to feel righteous indignation….we must express it with dignity and respectability #MichaelBrown — jamalbryant (@jamalhbryant) August 14, 2014

Paul Revere, an Indianapolis free lance writer was one of many who sent his prayers.

RT @PaulRevere25: I can’t be there in Ferguson but I can take authority in the Spirit…praying for u and all who go to help…we need it — jamalbryant (@jamalhbryant) August 14, 2014 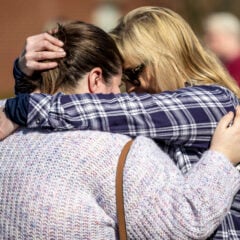