Driscoll has been an influential but edgy pastor within conservative evangelical circles for several years. Photo of his announcement courtesy of Mars Hill Church

(RNS) Controversial Seattle megachurch founder Mark Driscoll will step down for at least six weeks while church leaders review formal charges lodged by a group of pastors that he abused his power.

The 43-year-old pastor has been under fire in recent months for plagiarism, inappropriate use of church funds and improper behavior toward subordinates.

“I want to say to my Mars Hill family, past and present, I’m very sorry. I genuinely mean it,” Driscoll said in his address. “I’m very sorry for the times I’ve been angry, short or insensitive. I’m very sorry for anything I’ve done to distract from our mission by inviting criticism, controversy or negative media attention.”

Driscoll said he will not do any outside speaking for the foreseeable future and postpone the publication of his next book.

“I have begun meeting with a professional team of mature Christians who provide wise counsel to help further my personal development and maturity before God and men,” Driscoll told the congregation.

Mark DeMoss, an Atlanta public relations consultant and former adviser to Mitt Romney’s presidential campaign, has been brought in to work with the congregation.

DeMoss, who represented the late Jerry Falwell Sr. and now Franklin Graham, said he attended the services in Seattle today on his own expense as Driscoll’s friend.

“I think he’s a gifted, biblical communicator who has done effective church work in an unchurched part of the country,” DeMoss said. “I like him, I believe in him, and if I only worked with ministry leaders who were faultless, I would be out of business tonight.”

Warren Throckmorton, a Grove City College psychology professor who has been blogging details of the events surrounding the church’s turmoil, first posted an audio clip of Driscoll’s 13-minute message. Throckmorton said he is aware of other elders planning to resign or considering it.

“Storm clouds seem to be swirling around me more than ever in recent month, and I have given much thought and sought much counsel as to why that is and what to do about it,” Driscoll said. “Some have challenged various aspects of my personality and leadership style, and while some of these challenges seem unfair, I have no problem admitting I am deserving of some of these criticisms based my own past actions that I am genuinely sorry for.”

Respected preacher and author John Piper, who received some backlash for inviting Driscoll to his 2006 Desiring God conference, tweeted his reaction to this news.

I hope Mark Driscoll feels a tidal wave of hope-filled prayer for a new day and a new man in this season. http://t.co/aG4CGMMl0i

Though he has long been controversial but popular for his unapologetic chauvinism, Driscoll faced increasing turmoil this past year within evangelical circles. A front-page story in The New York Times Saturday (Aug. 23),  suggested that Driscoll’s empire was “imploding.”

“He was really important — in the Internet age, Mark Driscoll definitely built up the evangelical movement enormously,” Timothy Keller, the senior pastor of Redeemer Presbyterian Church in New York, told the Times. “But the brashness and the arrogance and the rudeness in personal relationships — which he himself has confessed repeatedly — was obvious to many from the earliest days, and he has definitely now disillusioned quite a lot of people.” 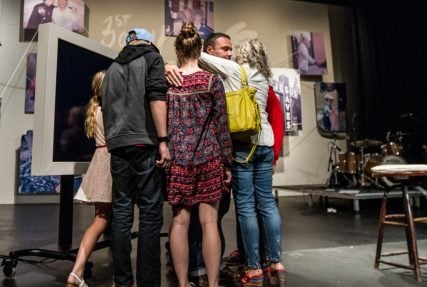 Mark Driscoll was embraced by his family after Sunday’s announcement. Photo courtesy of Mars Hill Church

Mars Hill Church has claimed as many as 14,000 members at 15 locations across five states each Sunday.

Earlier this week, 21 former Mars Hill pastors filed charges against Driscoll, saying that he has engaged in a pattern of abusive and intimidating conduct and has not changed.

“God is not honored by conflict, strife, disunity, arguing, slander, gossip, or anything else that is inconsistent with the fruit of the spirit, and I am deeply sorry, genuinely sorry, for the times I have not lived peaceably with all men,” Driscoll said.

Mars Hill also canceled its fall Resurgence Conference, which was to feature recently resigned board members Paul Tripp and James MacDonald as speakers. Driscoll was removed as closing speaker at an October church conference in Dallas and stricken from the speaker list at a series of four Christian “Act Like Men” conferences.

DeMoss, who also helped MacDonald during a theological controversy a few years ago, declined to comment on the criticism Driscoll has faced from other fellow evangelical pastors.

Earlier this month, Driscoll was removed from Acts 29, a church-planting network of more than 500 churches he helped found, after board members said they found a pattern of “ungodly and disqualifying behavior.”

“Based on the totality of the circumstances, we are now asking you to please step down from ministry for an extended time and seek help,” board members told Driscoll.

Driscoll recently admitted to and apologized for comments he made under the pseudonym “William Wallace II” where he posted statements critical of feminism, homosexuality and “sensitive emasculated” men. He noted those comments again in his address on Sunday.

“I have acknowledged and confessed many of my sins and shortcomings and missteps and God has been more than faithful with his forgiveness,” he said.

He has been provocative, occasionally profane, and has faced more recent allegations of plagiarism and inflating his book sales. “Mistakes were made that I am grieved by and apologize for,” he said late last year of plagiarism charges. He also apologized in March, saying “my angry-young-prophet days are over.”

Driscoll, who came into evangelical prominence as multi-site churches and podcasts were becoming more popular, noted one of the paradoxes of being a pastor in a media age.

“The same media channels that can be used to carry a sermon to virtually anyone around the world, can be used by anyone around the globe to criticize, attack or slander,” Driscoll said. “However, another part of it is simply my fault and I will own it, confess it and move on from it as God continues to redeem me.”

“I think this is a challenging day for all pastors, in large part because of this media age we live in,” DeMoss said. “It’s very easy to mobilize opposition, and anybody can have a public forum to criticize or expose or say whatever they want to say. That wasn’t true even 10 years ago.”