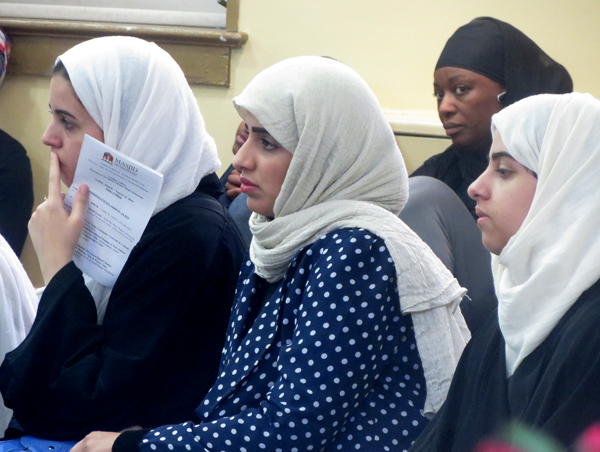 (RNS) In non-Muslim societies, a woman in a headscarf is often perceived as less approachable and sociable, according to past research, and some see the head covering as a means of repressing women.

But a new British study concludes that for many Muslim women, the headscarf, or hijab, is correlated with a positive body image -- whether the woman is very religious or not.

"It makes sense," said Viren Swami, a psychologist and the lead researcher on the University of Westminster study. "Part of the reason why women start wearing the the hijab is to non-sexualize the female body. Women who wear the hijab probably experience less objectification."

The hijab may also give women a sense of control over the image they project to the world, and enhance that part of self-esteem that is rooted in a strong sense of identity, as some previous studies have suggested.

Viren Swami, a psychologist and the lead researcher on the University of Westminster study. Photo courtesy of Viren Swami

Swami and his team asked nearly 600 Muslim British women to answer questions about their satisfaction with their bodies and their weight. They also measured how these women were affected by popular images of women's bodies.

The results, published in the August edition of the British Journal of Psychology, revealed small but significant differences between women who chose to wear the hijab and those who did not.

"Participants who wore the hijab generally had more positive body image, were less reliant on media messages about beauty ideals, and placed less importance on appearance than participants who did not wear the hijab," the study concluded.

Uzma Farooq, a Sufi Muslim living in the Washington, D.C., area who wears the hijab, said the new report rings true to her because wearing her headscarf gives her a sense of peace, and allows her to focus on inner beauty.

People are beginning to see that the hijab can mean different things to different women, she said. It is "ever-transforming and evolving communities against stereotypes and shaping the feminine image of Islam."

Uzma Farooq, vice president of the MWC, photographed during a wedding in Los Angeles, Calif. Photo courtesy of MWC

And at times, she said, it's a relief to put on a hijab and not worry that you haven't colored your hair recently.

But Farooq, vice president of the nonprofit Muslim Women's Coalition, rejects the idea that a hijab makes a woman feels good because it gives permission to neglect her appearance or subsume her femininity. The hijab is often perceived as a sign of modesty and piety, she said.

"But wearing a hijab does not mean you have to look drab," continued Farooq. "There are some beautiful hijabs out there."

Jenahara, an up-and-coming fashion designer in Jakarta, Indonesia, has her own line of stylish hijabs, and said the head covering is not only an article of clothing but also an article of faith. 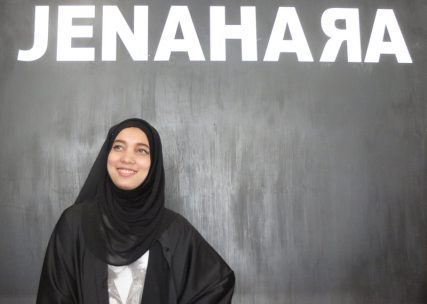 (RNS) Indonesian fashion designer Jenahara aims to give Muslim women clothing options that are both modest and stylish. Photo by Kevin Eckstrom.

Swami and his team also controlled for the religiosity of the participants, to find that it was the wearing of the hijab itself, not necessarily a commitment to religious observance, that was linked with better body image.

But that doesn't mean that women -- Muslim or otherwise -- should don hijabs to counter anxieties about their own bodies, Swami added. The study demonstrates a correlation between headscarf wearing and satisfaction with one's body, but not causation: It doesn't prove that the hijab is making the women feel good about their forms.

Neither should anyone conclude that the results would hold for women forced to wear the hijab, or those who live in societies where wearing a hijab is restricted, he added, since an important aspect of the group studied is that the 600 women had the choice to wear one. About 400 said they did at least sometimes, and about 200 said they never did.

In nations where women have to wear the hijab, "I don't expect we would get the same results," but that might be an interesting follow-up study, Swami said.

Related Posts
By Amy Klein
What good is faith when your fertility treatments aren't working?
By Caitlin Yoshiko Kandil
'I have to find the Mecca of my heart': Muslims grieve as hajj is drastically limited
By Aysha Khan
After arrest, teenage Muslim protester and volunteer medic made to remove hijab for booking photo
By Erin Smith
My surprising journey to hijab fashion
By Alejandra Molina
Four young people of different faiths move into a home together, then a pandemic happens