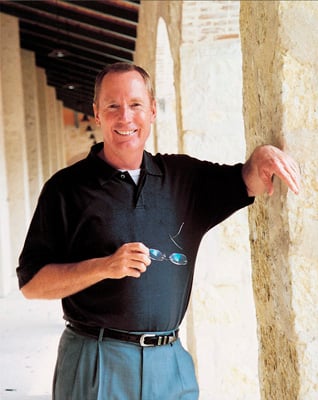 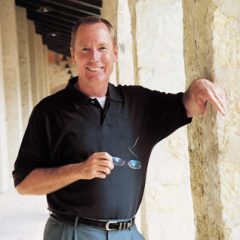 When megachurch pastor Max Lucado greeted his successor at his San Antonio church, the two stood onstage and tried to put on each other’s shoes. Photo courtesy Thomas Nelson

(RNS) When megachurch pastor Max Lucado greeted his successor at his San Antonio church, the two stood onstage and tried to put on each other’s shoes. They couldn't.

The point, say co-authors William Vanderbloemen and Warren Bird in their new book about pastoral succession, came through loud and clear: No leader can stay forever. And none will be exactly like the one who came before.

For congregations that haven’t thought about who will succeed their current pastor, the authors of the new book “Next: Pastoral Succession That Works” have words of warning: Be prepared.

Churches may not know the day or the hour when they need to have an interim or permanent replacement for the senior pastor. 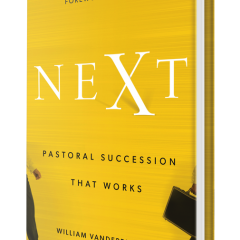 The authors recall the intentions of Mark Driscoll, founder of Seattle-based Mars Hill Church, who stepped down temporarily last month amid charges of plagiarism and abuse of power. Driscoll hoped to remain at the helm of his church for 50 years.

“The recent headlines, which in this case happen to be Mark Driscoll but next week could be someone else, remind us that every leader needs to have a succession plan in place,” said Bird, research director at Dallas-based Leadership Network, a church think tank. “Whether the plane goes down or whether they need a sabbatical or any other reason.” 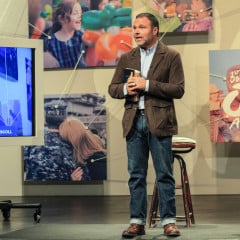 Controversial Seattle megachurch founder Mark Driscoll will step down for at least six weeks while church leaders review formal charges lodged by a group of pastors that he abused his power. Photo courtesy of Mars Hill Church

With Vanderbloemen, a Houston-based church executive search expert, the co-authors paint a challenging portrait of church transition, based on research into pastors of large Protestant churches. Among those churches:

As they researched good and bad cases they concluded, “Regrettably, too many of the troubled successions involved transitions from founding pastors.’” 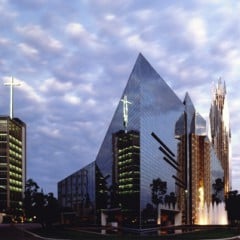 Exhibits A and B were Crystal Cathedral and First Baptist Dallas. In the case of the first, a planned transition from California megachurch founder Robert H. Schuller to his son turned into a family battle and a bankrupt glass-walled edifice that is now owned by the Roman Catholic Diocese of Orange (County).

At the Texas megachurch, longtime Southern Baptist leader W.A. Criswell was not ready to give up the reins when successor Joel Gregory was chosen as “co-pastor.” As the authors recount, upon Gregory’s arrival, the “co” notion was dropped and Criswell retained the title of “senior pastor.” Two years later, Gregory quit.

“From a perspective of 22 years later, I feel the Lord led me there, and the Lord led me away,” Gregory said in an interview published this week by Associated Baptist Press. “I think some of my successors would say it was a shock that helped clarify the situation.”

Wes Granberg-Michaelson, general secretary emeritus of the Reformed Church in America and a former board member of the Crystal Cathedral, has witnessed failed and successful transitions. 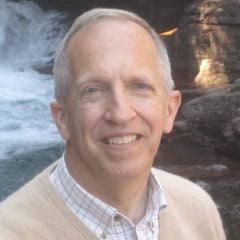 “Pastoral successions, especially after a long-term founding or well-established pastor, are one of the most crucial times in a congregation's life cycle,” Granberg-Michaelson said. “When done well, the congregation's ministry and life is re-energized and revived for the future. When done poorly, decades of successful and thriving ministry can deteriorate, heading the congregation into a downward slope.”

“It’s the leadership development conversation that’s been happening more and more in churches,” Bird said in an interview right before heading to an elders’ meeting at his own congregation where they were considering future elders. 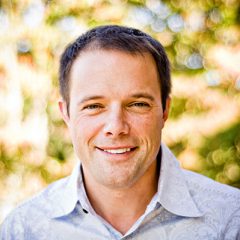 “The next step of that is to say, ‘All right, pastor, what about the stuff you do?” he said. “’Can we talk about who and how and can you be training people for everything that you do?’”

The book co-authors recently released a report on finances of many of the country’s large churches.

“While no succession is identical, we have seen a clear and dominant pattern of churches waiting too long to have the ‘succession planning’ conversation,” Vanderbloemen said in that report. “All pastors are interim pastors. All churches will face a transition. Developing a plan sooner rather than later is the wise approach to an inevitable reality.”

Related Posts
By Mark Mulder, Gerardo Martí
Megachurches may be particularly threatened by COVID-19 closures
By Heather Adams
Crystal Cathedral, home to the 'Hour of Power,' transforms into Catholic seat
By Mark A. Kellner
Shuttered houses of worship get a reboot, find new life
By Richard Flory
How California’s megachurches changed Christian culture
By Cathy Lynn Grossman
The megachurch boom rolls on, but big concerns are rising too