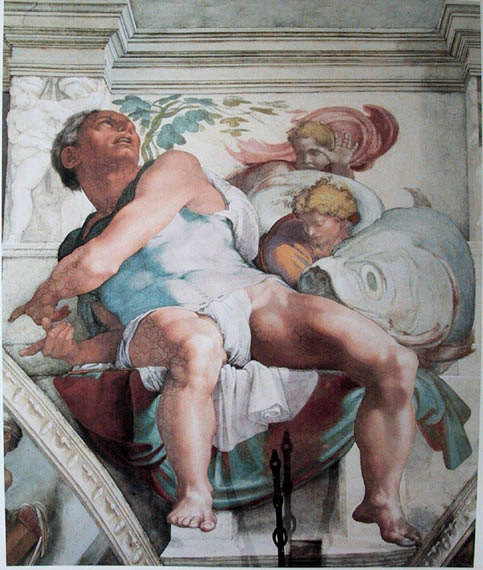 Jonah as portrayed by Michelangelo in the Sistine Chapel

Yom Kippur is over, and that means the Jewish community has had another opportunity to reflect on the Book of Jonah, which is read in synagogue in the late afternoon. The book is all about repentance, and as the Day of Atonement draws to an end, it’s comforting to hear about God’s mercy to people who repent their sins.

The people in question are the inhabitants of Nineveh, non-Jews who don sackcloth and fast after being warned by the Hebrew prophet Jonah that their city is going to be destroyed. And because they turn away from evil — “from the violence that is in their hands” — God himself repents of the violence he had planned to do to them.

Jonah, however, is enraged, and goes so far as to make God’s mercy the reason for his initial decision to disobey God’s command to warn the Ninevites: “I pray thee, O Lord, was not this my saying, when I was yet in my country? Therefore I fled before unto Tarshish: for I knew that thou art a gracious God, and merciful, slow to anger, and of great kindness, and repentest thee of the evil.”

Maybe Jonah didn’t want Ninevah spared because it was the capital of the Assyrian Empire, the great enemy of Israel. Or, as the 12-century rabbinic authority Rashi contends, he was concerned that the NInevites would consider him a false prophet when the predicted destruction didn’t come. No matter how you slice it, Jonah, God’s messenger, stands in opposition to God’s mercy.

Pope Francis, who has made mercy the centerpiece of his papacy, sees him as an exemplar of hypocritical religious leaders who exhibit “an attitude of pure piety” even as they disregard “poor people.” This he calls “the Jonah Syndrome.” On Saturday, looking to the synod on the family that opened this morning, he issued another one of his warnings for them not to fall victim to it.

Yes, in the Gospel there is salvation which fulfills the most profound needs of man! Of this salvation – work of God’s mercy and grace – as a Church, we are sign and instrument, a living and effective sacrament.

If it were not so, our building would remain only a house of cards, and pastors would be reduced to clerics of state, on whose lips the people would search in vain for the freshness and “smell of the Gospel.”

At Mass Sunday morning, he was at it again, warning against the greed and pride and hypocrisy that can impel church leaders to make of the Lord’s vineyard “what they want, and remove God from the possibilities of realizing his dream for the people he has chosen.”

At the end of the Book of Jonah, God again infuriates the prophet by killing off a plant that had provided him with much needed shade. You pitied the plant, God says, which you didn’t make grow, and which came up in a night and perished in a night. “And should not I spare Nineveh, that great city, where there are more than 150 thousand people who don’t know their left hand from their right, and also many cattle?”

The answer seems obvious, but because the book ends right there, we don’t know whether Jonah learned God’s lesson of mercy. We’ll see in due course if the bishops have learned the pope’s.