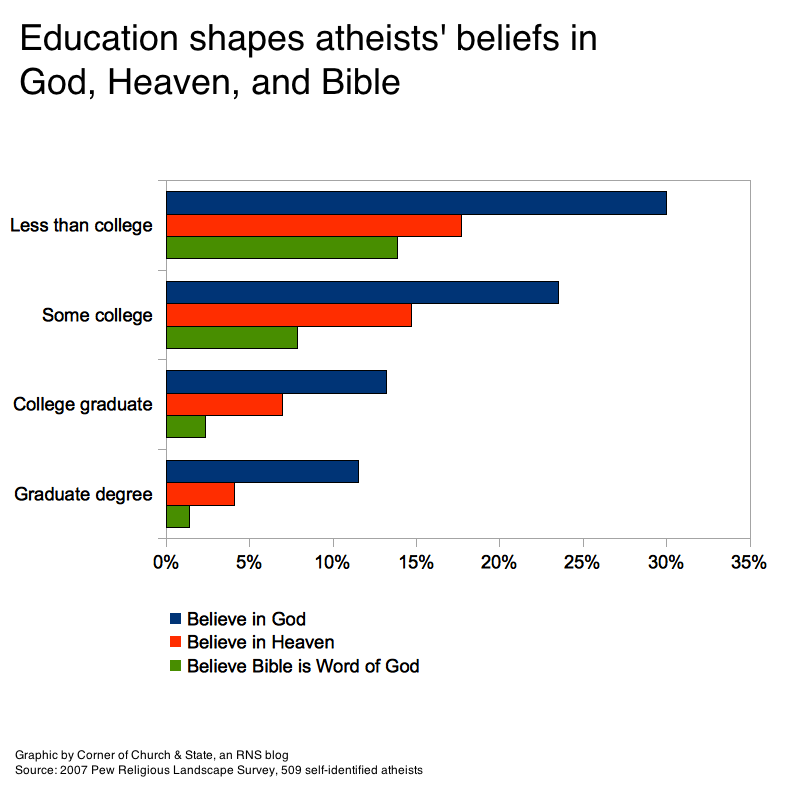 This graphic is not offered for republication.
November 4, 2014
Tobin Grant

This post has been updated to include further analysis on belief in God as a person. See end of post.

There was shock and disbelief when I posted a graphic showing how different American faiths differed in their belief in God. The graph showed that a fraction of self-identified atheists expressed absolute certainty that there is a "God or universal spirit."

While no one seemed surprised that no religious group had all of its members believe in God, some readers were incredulous that the survey found any atheists who believed in God.

Those results were conservative because I only included those who were "absolutely certain" about their belief in God. It turns out that in the Pew Religious Landscape Survey, one-in-five self-identified atheists believe in God. The survey found that these atheists hold other religious beliefs. Eleven percent believe in Heaven (or a place of eternal reward for being good). And six percent say that the Bible is "the word of God" and not a book of fables.

The real problem, however, is that labels do not always mean the same thing to everyone. Some people truly identify themselves as "atheist" even though they believe in God. The word simply means something different to them than it does to American Atheists, the Richard Dawkins Foundation, and (frankly) every English language dictionary.

But the same logic applies here as to self-identified "Christians" or other religious groups. How people identify themselves may be very different from the dictionary definitions of those identities.

A good comparison would be the meaning of "religious." When we ask someone if they are "religious," people respond depending on their interpretation of the word. For some, "religious" simply means that they have a religion or that they practice their religion. For others, "religious" is a synonym for "zealous." To be "religious" is to have a fervent in-your-face faith that you try to press on others. Likewise, most people know that "atheist" means someone who does not believe in God(s). But some people might think it means that they reject religion, don't go to church anymore, or something else entirely.

One of the ways that we can see this is to compare how beliefs differ for self-identified atheists by education. With higher educational attainment, there is far less belief. While 30 percent of those with no college education believe in God, less than 15 percent of those with college degrees do so. For the other beliefs, we find single-digit levels among college graduates.

These seem reasonable, at least to me. Some could be coding errors. Some could have misspoken. Many may hold complex opinion; so, they picked the survey option that seemed best at the time. For example, some atheists may say they believe in God, the same way that Einstein or Spinoza would speak of "God" as being the natural laws that govern the universe.

For those with questions about the meaning of the question on God, here is further analysis on belief in God as a person who relates to humanity.

Respondents who said that they believed in God were asked:

Which comes closest to your view of God? God is a person with whom people can have a relationship or God is an impersonal force?

Overall, five percent of atheists said they believed in a God who is a person (not an impersonal force). As with other beliefs, this varies by education, which is indicative that the differences are due to an understanding of "atheist." Still, there were atheists at all levels of education who believed in a personal God.  Here is the breakdown:

Atheists may argue amongst themselves whether or not an "atheist" is still an "atheist" if she believes in a universal spirit or an impersonal force called "God"  Indeed, that's the point of the post: labels people use to self-identify are fluid and vary in meaning.