It’s rare that we hear of Christian parents responding to their LGBT children coming out with love and grace. The common reactions are of guilt (“What did I do?”), or suggesting conversion therapy (“We can change you”), or just complete condemnation and rejection (“You’re going to hell. Get out of my house.”) At best, parents respond with “I still love you, I just don’t agree with your lifestyle.”

These reactions stem from the parent’s lack of understanding on sexuality and gender as well as their indoctrination with the church’s religious homophobia. That’s why it’s incredibly refreshing when parent’s respond to their children with open arms.

Meet Kathleen Geraty: A Lesbian Christian who shared with me a letter her father gave her after she came out. Since her early 30s, Kathleen had been writing letters to her parents but only having conversations about her sexuality with her mother. She was questioning her sexuality and it was a way for her to speak to her mother without the anxiety of a face to face conversation. When she was 42, she was living in LA and invited her parents to go to the Christmas performance of the Gay, Lesbians, and Friends Choir. It was around that time that she broke the news to her parents about having been in relationships with women. She was told that her being a lesbian was “fine” but her parents didn’t think it should be “sexually expressed.”

Years later, after her mother had passed, she spoke to her father candidly about her sexuality sharing her journey about reconciling her sexuality and faith. She shared her heartaches as he intently listened. After she was finished, he asked “couldn’t you just be friends with her?” referring to her partner at the time. She responded, “Could you have just been friends with mom?”

That’s when he had an “Ah hah!” moment and it all clicked. Sexual intimacy was an important part of a romantic relationship. Not the only part, but an important part. After delving deep into studies to better understand his daughter’s sexuality, he wrote the following letter just before turning 90:

Please excuse my stationery, Here we are at Aunt Jean’s. I called you last night and left a message. We arrived in the 5:30 pm traffic.

I’ve read your Walk Wink’s (editor) Homosexuality & Christian Faith and consider it an excellent book. Thanks for sharing it with me. Our sexual orientation is God-given, and we can’t and don’t want to change it. God loves and appreciates individuality.

I hasten to assure you, sweetheart that I affirm you in your sexual orientation and sexual behavior as God leads and helps you. I admire your dedication to Him and your daily keeping close to Him and wanting to do His will as you serve and help people.

We as a church, nation, and as individuals need a reconciling respect, love, fidelity, and understanding of one another. All of us are God’s children. We must acknowledge the value of each person, and love will know no denominational boundaries and shall not be limited to those who think that they have the truth. They are our sisters and brothers even if they are in other churches and in other lands.

The bible knows only a love ethic. I am sorry, Kathleen, for the pain and struggle that you must have experienced, but be assured of me love and honor for you in my increasing knowledge. You are dear to me. With unconditional love.

Lovingly yours “in the blessed hope,”

Kathleen’s father passed away last year at 99 years of age. He had written that letter as a life long Seventh-day Adventist and leader in the church. She read the letter to her family at the funeral and they wept tears of joy. Her brother told her, “It makes me love him even more.”

This letter is a stark contrast to the letter this gay Christian received from his church dismissing him. In many ways, the church is family. And the way the church responds to LGBT people feels very similar to how your family responds. After all, that’s why we go to church – for community and fellowship.

We are failing miserably to support parents of LGBT children in guiding them to love and affirm their children. The rates of LGBT homeless youth far too high and Christian families rejecting their LGBT children is a huge contributing factor. This response may be out of the ordinary, but it’s the most reflective of Christ love. The day this narrative is the norm and not the exception is the day we become one step closer to a church that is reflective of the image of God. 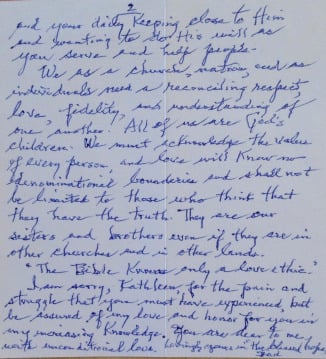