BERLIN (RNS) After the terrorist attacks in France, German Muslims staged their own demonstration Tuesday (Jan. 13) to say loud and clear: not in my name.

The rally, organized by several German Muslim groups, was held at the same spot where anti-Islam protesters known as the Patriotic Europeans Against the Islamization of the West, or PEGIDA, have held rallies.

That movement has drawn ever-larger numbers — including a record 25,000 people in Dresden on Monday (Jan. 12) and smaller crowds in other cities.

While Muslim communities in France and Germany were quick to condemn the massacre at the satirical magazine Charlie Hebdo and the shooting at a kosher supermarket, both in Paris, community leaders said it was time to become more visible — especially in light of spiking Islamophobia. 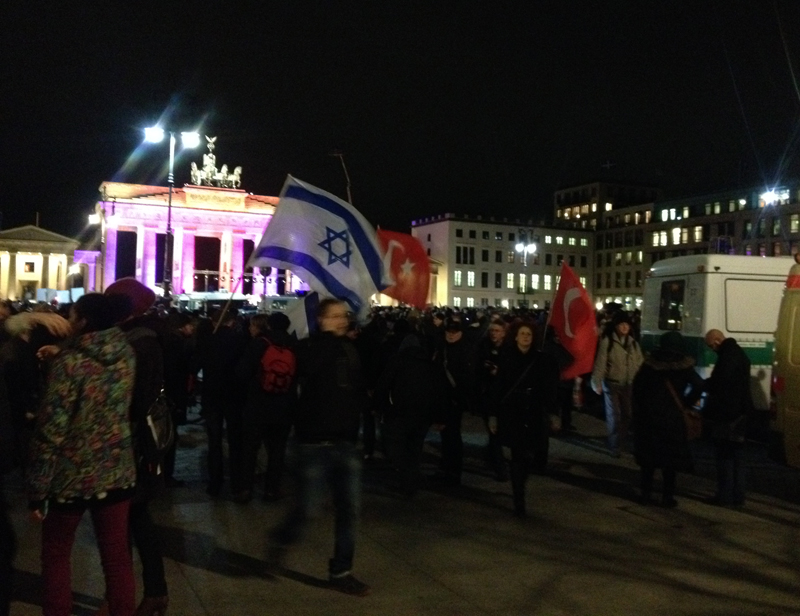 German Muslims gather at Brandenburg Gate to honor the victims of last week’s attacks in Paris and show their condemnation of terrorism. Religion News Service photo by Angela Waters

“We came here to support our religion and show that we are not terrorists,” said Aludayni Haddid, 20, of Berlin, at the rally. “It is unfair for people to turn against us because of a few men.”

The Central Council of Muslims in Germany and other Muslim groups organized the rally with the slogan “Let’s be there for each other. Terror: not in our name!”

Police estimated that about 4,000 people attended, including Chancellor Angela Merkel and clergy from the Christian, Muslim and Jewish faiths.

Some in the crowd held candles; others held banners reading “Je Suis Charlie” marked with Christian, Jewish and Muslim symbols. One banner read: “We are not terrorists.”

German leaders spoke about the need for unity after the Paris attacks.

“We are all Germany,” said German President Joachim Gauck, echoing Merkel, who on Monday (Jan. 12) was quoted saying, “Islam belongs to Germany.”

Some 4.3 million Muslims live in Germany. Turkish Muslims were among the first to arrive as “guest workers” in the early 1960s. More recently, the number of Muslims immigrating to Germany has spiked as asylum seekers from North Africa and the Middle East have fled turmoil in the region. Last year, nearly 200,000 refugees from Syria applied for asylum, almost double the amount of the year before, according to the German government.

At the same time, an estimated 550 Germans have fought with the Islamic State, fueling the spike in Islamophobia, which analysts say began after 9/11.

A study published last week by the Bertelsmann Foundation found that 57 percent of non-Muslim Germans consider Islam a threat to the country.

Commentators worry that support for the movement is growing. PEGIDA has swept up the fringes of German society — people who feel alienated from politics and do not share in fruits of the country’s relatively strong economy.

“Young right radicals meet up with dissatisfied secondary school teachers in PEGIDA,” said cultural studies professor Werner Schiffauer of the European University Viadrina Frankfurt. “PEGIDA is like a querulous child, that has created its own bogeyman, and that bogeyman is this so-called Islamization.”

Similar trends are occurring throughout Europe. Voters in Britain, France and other countries gave far-right, xenophobic politicians large blocs of seats in the European Parliament in recent elections, for example.

“PEGIDA is not coming out of nowhere,” said University of Leipzig sociologist Johannes Kiess. “Anti-immigrant and Islamophobic attitudes are also an issue in other countries.”

Members of the Muslim community in Germany have said they feel caught between two camps: religious extremists and political extremists.

Ale Hosseini, of the Islamic Centre in Hamburg, said the country’s leaders need to prevent groups such as PEGIDA from ramming a wedge into society.

Berlin’s marchers, though much smaller, shared a similar mindset.

“I was happy that the Muslims organized it, because it makes us feel welcome to be here,” said Jamal Ahmad, 46, of Berlin. “We don’t want to be seen as ‘the other’ but German.”

(Nele Obermueller in Berlin contributed to this report.)

News
Poll: Muslim American support for Trump rises, but most plan to vote for Biden
News
What’s behind the ‘Cuties’ outrage?
Opinion
To beat Trump, the ‘good Muslim, bad Muslim’ messaging has to end
News
‘I have to find the Mecca of my heart’: Muslims grieve as hajj is drastically limited
Opinion
Yes, confederate names matter
© Copyright 2020, Religion News Service. All rights reserved. Use of and/or registration on any portion of this site constitutes acceptance of our User Agreement and Privacy Policy, Privacy Statement and Cookie Notice. The material on this site may not be reproduced, distributed, transmitted, cached or otherwise used, except with the prior written permission of Religion News Service.