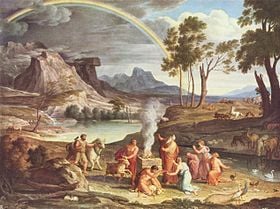 James Inhofe (R-OK), the new chairman of the Senate Environment and Public Works Committee, delivered something of a surprise last week when he joined 97 of his colleagues in voting that climate change exists (eppur si muove). The author of The Greatest Hoax: How the Global Warming Conspiracy Threatens Your Future (2012) allowed as how the “hoax” did not concern the existence of climate change — for which, he said, there is archeological and biblical and historical evidence — but “that there are some people that are so arrogant to think that they are so powerful that they can change climate. Man can’t change climate.”

That denial was easy to make fun of, and many did, but rationalizing doing nothing about carbon emissions on religious grounds is no laughing matter, not when it results in the Senate’s inability to go on and acknowledge even a modest degree of human responsibility for global warming. Under the circumstances, it behooves us to try to engage Inhofe and his fellow disbelievers on their own terms, and try to persuade them to rethink their understanding of what the Bible says about the Earth and its climate. For in fact, their inerrantist approach to reading Scripture does not warrant the position they take.

Inhofe believes that God will keep climate change at bay on the basis of Genesis 8:22: “As long as the earth endures, seedtime and harvest, cold and heat, summer and winter, day and night, shall not cease.” This verse comes after the Flood, where, in a series of statements, God promises not to inundate the earth again, making the rainbow a reminder of the promise.

Nor is Oklahoma’s senior senator alone. In its enunciation of a “Biblical Perspective of Environmental Stewardship,” the Cornwall Alliance, an evangelical organization dedicated to combatting climate change activism, declares:

We deny, due to God’s faithfulness to His covenant, in which He proclaimed, after the Flood, that He would sustain the cycles on which terrestrial life depends for as long as the Earth endures (Genesis 8:22), that God’s curse on the Earth negates either the dominion mandate (Genesis 1:28) or the robustness and self-correcting resilience of the God-sustained Earth.

God’s curse refers to one of the punishments for Adam and Eve’s original sin: “Cursed is the ground because of you; through painful toil you will eat food from it all the days of your life,” etc. (Genesis 3:17-19) But notice where the proof-texting stops. That business about the Earth’s “robustness and self-correcting resilience” is interpretive license, not biblical perspective. As for Genesis 8:22, it hardly constitutes a claim that human beings can do nothing to change the climate.

In fact, biblical inerrancy as understood over the past century does not preclude human agency on so grand a scale. To the contrary, apocalyptic prognostication is full of it. Not only are normal wars and rumors of wars taken to presage the End Times, but the invention of nuclear weapons has provided practitioners of Prophecy with ample fuel. “Every second of every day, nuclear bombs are aimed at U.S. by Russia and China,” declares one. “Soon the giant nuclear sword will be unleashed upon a wicked world.”

To be sure, the traditional Christian view, derived from the Second Epistle of Peter along with the story of Noah, takes the position advanced in the old spiritual: “God gave Noah the rainbow sign, / No more water, the fire next time.” If global warming is allowed to continue, next time we can look forward to both.