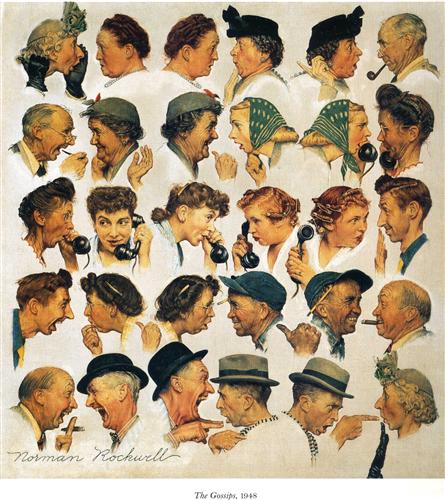 The Gossips, by Norman Rockwell

Well, maybe not exactly secret. But in the letter he sent yesterday to the heads of bishops conferences and religious orders around the world, Francis made it clear to insiders, in a way most outsiders won’t grasp, that Rome has changed how it looks at the cover-up of child sexual abuse. The letter, sent at the request of the commission on the protection of minors Francis established last March, includes the following key paragraph:

Families need to know that the Church is making every effort to protect their children.  They should also know that they have every right to turn to the Church with full confidence, for it is a safe and secure home. Consequently, priority must not be given to any other kind of concern, whatever its nature, such as the desire to avoid scandal, since there is absolutely no place in ministry for those who abuse minors.

“The desire to avoid scandal” is not just one concern among many. It is the key reason given in document after internal diocesan document explaining why a priest credibly accused of sexually abusing a minor is being quietly shuffled off to another parish, another diocese, another country — anything other than reported to the civil authorities and the faithful.

And that’s because “scandal” means more ecclesiastically than it does in common parlance. Aquinas defines it as an unrighteous word or deed that occasions the ruin of another, the idea being that sinful activity, if known to others, begets more sin. For that reason, Canon Law (1352) mandates the suspension of punishment “either in whole or in part to the extent that the offender cannot observe it without the danger of grave scandal or loss of good name.”

What the pope is telling church leaders is that the doctrine of scandal can no longer be used to rationalize keeping abusive priests in ministry. No wonder commission member Marie Collins said that the letter “lends the backing necessary to our work.”