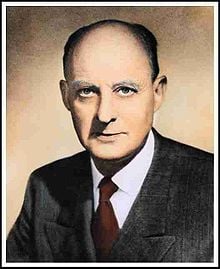 Proving once again that a little knowledge is a dangerous thing, New York Times designated conservative columnist Ross Douthat uses his Sunday column to mount a critique of President Obama’s Prayer Breakfast speech, during which the president reminded his audience that Christians too have been guilty of committing acts of violence in the name of their religion. The sin he accuses Obama of might be called cheap Niebuhrianism.

Reinhold Niebuhr, the great political theologian of the last century, liked to warn against the failure to see the mote in our own eye — urging that, as Douthat puts it, “Americans in particular need to put aside illusions about our own alleged perfection.” Obama, however, was not really being self-critical when he called attention to Christianity’s less admirable past.

Which leads Douthat to contrast Obama’s remarks unfavorably with what he claims was “probably” the most Niebuhrian presidential speech in modern American history — Dwight Eisenhower’s farewell address, which famously warned against “the military-industrial complex” and “a scientific-technological elite.” Writes Douthat, “It was powerful precisely because Eisenhower was criticizing his own party’s perennial temptations, acknowledging some of his own policies’ potential downsides (he had just created NASA and Darpa) and drawing on moral authority forged by his own military career.”

That’s got it exactly wrong. Through the 1960s, the Republican Party’s perennial temptation was not war-making but its opposite. The party’s Whig progenitor opposed the Mexican War of the 1840s, and isolationism had its home in the GOP through the first half of the 20th century. In the just completed presidential campaign, JFK had been the hawk, attacking the Eisenhower Administration for allowing a (bogus) “missile gap” to develop between the U.S. and Soviet Russia and generally spending too little on defense.

Three days after Eisenhower’s farewell, Kennedy famously declared in his inaugural address,”Let every nation know, whether it wishes us well or ill, that we shall pay any price, bear any burden, meet any hardship, support any friend, oppose any foe, in order to assure the survival and the success of liberty.” Less famously, he went on to say, “We dare not tempt them with weakness. For only when our arms are sufficient beyond doubt can we be certain beyond doubt that they will never be employed.”

Talk about making the case for the military-industrial complex! Contra Douthat, Eisenhower was not being self-critical in his farewell address but warning against the incoming Democrats.

And indeed, in the sequel, it was Kennedy and Lyndon Johnson who, as Democratic presidents had done in World War I, World War II, and Korea, led the country into Vietnam. A reminder of that past was conveyed by 1976 GOP Vice Presidential candidate Bob Dole when he declared in his debate with Walter Mondale, “I figured it up the other day: If we added up the killed and wounded in Democrat wars in this century, it would be about 1.6 million Americans — enough to fill the city of Detroit.”

The sea change in partisan attitudes towards American war-making took place as a consequence of the Vietnam war. Douthat (b. 1979) is apparently unaware of this.

Prior to World War II, Reinhold Niebuhr parted company with his pacifistic brethren in his readiness to embrace the need to take up arms, first against the Fascists and then against the Communists. To my way of thinking, Obama’s Niebuhrianism is evident less in what he’s said than in what he’s done — particularly in his readiness to use drones to kill alleged terrorists, including American citizens.

Snarks Douthat, “The president’s displays of public angst over, say, drone strikes have mostly seemed like an exercise in self-justification, intended for an audience of one.” I would have thought they were intended for an audience of antiwar Democrats. History may well judge Obama harshly for his drone campaign, but it won’t be because he kowtowed to his political base.